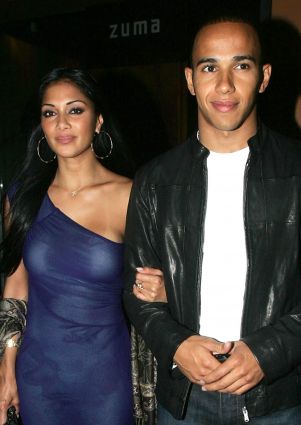 'It took four years, but Nicole Scherzinger and Lewis Hamilton are engaged': The Pussycat Doll's father reveals the intimate details behind the couple's turbocharged relationship.

When it comes to brains, beauty and plain ambition, few women could hope to out-do Nicole Prescovia Elikolani Valiente Scherzinger.

Not content with her lucrative career in the Pussycat Dolls and also being a solo artist with a No 1 hit, the singer and presenter has become an actress in a soon-to-be-released Hollywood blockbuster and now, at the age of 33, has knocked Cheryl Cole off her X Factor perch.

Wedding bells in the air? Nicole, seen with Lewis at the 2008 Brazilian Grand Prix, is 'an old-fashioned girl at heart and would love a family'

There is a glamorous boyfriend too: Lewis Hamilton, one of the most successful drivers on the Formula 1 Grand Prix circuit, and a multi-millionaire.

Together they are, perhaps, the ultimate power couple, two stars bound together in a high-octane round of red-carpet events and snatched meetings in luxury hotels.

But this is where the real questions begin. If Nicole and Hamilton's talent and joint star quality are beyond doubt, their four-year romance brings with it a lingering element of intrigue – not to say sheer puzzlement.

How, you might ask, can any relationship possibly work over so many thousands of miles and in such stressful conditions? Is there truly a relationship at all, beyond what is visible to the photographer's lens?

Nicole Scherzinger is hardly Hamilton's girl next door – the two of them are rarely on the same continent.

She makes her living in the television and recording studios of Los Angeles. Hamilton's world is the never-ending travelling caravan of F1, taking him from Silverstone and Abu Dhabi to Australia and beyond. Both are at the very top of their respective careers.

Today, however, Nicole's father Alfonso Valiente puts such doubts to rest saying, in his first-ever interview, that not only have the two of them found happiness in each other, but that they are engaged to be married. And the survival of their partnership in such turbulent waters, he suggests, owes much to the plain good sense and sheer determination of his daughter.

Alfonso, 52, met the man whom he refers to as 'my future son-in-law' for the first time last summer, when the couple spent a week holidaying on the Hawaiian island of Oahu, the place where Nicole was born and spent the first six years of her life.

Letting the pussycat out of the bag: Alfonso Valiente says his daughter wants to see more of her boyfriend, but their stressful lives can keep them hundreds of miles apart

'Lewis is a really good guy,' says the softly spoken Alfonso. 'When they came to visit we hired them a Jeep because he said he'd never driven one before.

'He only has two speeds that boy: flat out and coming to a screeching halt.'

It's a view that has been recently expressed in a less jocular fashion by Hamilton's F1 rivals, who have questioned his judgment on the track.

'You know about the proposal? Yes, they are engaged,' says Alfonso. 'My future son-in-law is a really nice guy, really down-to-earth. My family all like him.

'The good spirit is there. When he walked into the house for the first time, he picked up one of the babies. That went down very well.

'He is sincere and he and my daughter seem genuinely happy together.'

Frustrated in an under-performing McLaren team, the former world champion has found his gung-ho driving style subject to unprecedented criticism from racing greats including Sir Jackie Stewart, who spoke of his ' questionable moves', and Niki Lauda, who claimed: 'He's a danger to his peers.'

Hamilton is based in Geneva, hundreds of miles from his parents in the Home Counties, and it has been suggested that a life lived largely on his own can only exacerbate the huge mental strains of racing at 180mph-plus.

It cannot help that he is in the process of rebuilding his relationship with his father Anthony after sacking him as his manager. Daily Mail