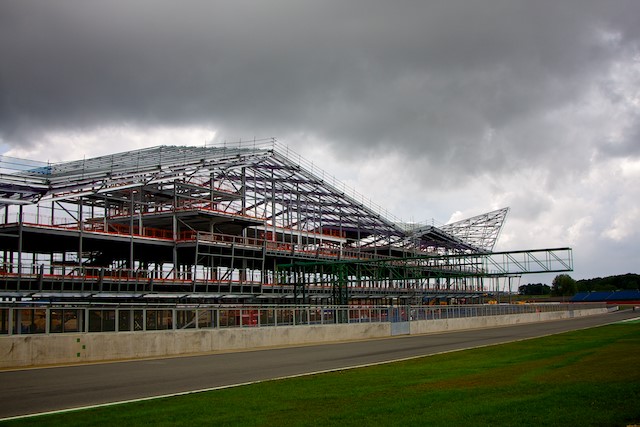 Many spectators sitting opposite the pits cannot see the podium, and they will also miss the pitstops of top teams including Red Bull and McLaren because some of the garages are situated lower than the pitwall.

"It probably isn't great for the spectators as they are not going to see many Red Bull or McLaren pitstops this weekend," said Christian Horner.

It emerges that Silverstone wanted the three newest teams to occupy the subterranean end of the pitlane, but that F1 chief executive Ecclestone ordered the switch so that the grandee teams could be easily seen by Paddock Club guests.

"It's not ideal," the 80-year-old admitted, "but I can't keep complaining about the place. They have made a lot of improvements."

Track boss Richard Phillips said the situation should be better in the future.

"Christian (Horner) is complaining to the wrong people. FOM (Formula One Management) switched the garages to keep the Paddock Club happy.

"The plan is to replace the temporary grandstands with permanent buildings that have a steeper rake and will have a better view," he added.

Exhaust saga continues to blow at Silverstone
(GMM) As the blown exhaust row between Red Bull and McLaren subsided late on Friday, the latter team was already working hard to catch up with the ever-changing rules.

GP2 driver Oliver Turvey was in McLaren's Woking driver simulator after it emerged the Renault teams – including dominant Red Bull – have been allowed by the FIA to use 50 per cent throttle under braking.

Earlier, the FIA intended to limit off-throttle engine blowing to 10 per cent, but the Renault teams argued that they need at least 50 per cent on reliability grounds.

McLaren team figures said they only discovered Renault's 50 per cent concession during free practice on Friday, when Ferrari boss Stefano Domenicali was heard telling his counterpart Martin Whitmarsh "The (Red Bull) ******* are doing it again".

"We were saying 'Wait a second, can we do that (too)?" Jenson Button told AS newspaper.

It also emerges that Mercedes have been allowed to use 20 per cent throttle, based on the engine maps of the pre-exhaust blowing era in 2009.

"I am sure it has put many teams this weekend a little bit on the back foot so we are trying to cope with that at the moment," said Whitmarsh.

Brazilian O Estado de S.Paulo journalist Livio Oricchio reports that a further rule clarification is due in the wake of yet another technical meeting on the subject late on Friday.

"The climate of the meeting was tense," he revealed. "Today (Saturday) the final decision of the FIA should be announced."

DRS breach leads to rules clarification
(GMM) A vague regulation was cleared up at Silverstone after Lewis Hamilton and Mark Webber were summoned by the stewards.

The pair were seen using their 'DRS' adjustable rear wings during rainy Friday practice, even though the innovation cannot be used on a wet track.

But McLaren, testing a new rear wing configuration ahead of the British grand prix, exploited a loophole in the rules that makes no mention of DRS being banned when the car is fitted with slick tires.

"The stewards just wanted to understand so that they could tighten the wording of the regulations for the next race," Hamilton confirmed.

Alonso would be 'great' Ferrari teammate – Button
(GMM) Jenson Button has refused to rule out switching to Ferrari.

McLaren has an option for 2012 on the British driver that must be activated within the next few weeks.

If the Woking based team lets the option expire, speculation that he is being lined up as the successor to Felipe Massa is certain to intensify.

Asked about Ferrari by the Spanish newspaper AS, 31-year-old Button answered at Silverstone: "Since I was a boy there are three teams I have dreamed about driving for — McLaren, Williams and Ferrari.

"I fulfilled a dream with Williams at the beginning of my career, and now I am at McLaren.

"I don't know what my future is, but I want to have a car to fight to win races. You never know what will happen in the future, but at the moment I am happy with what I have."

Button said he would not have a problem sharing a team with Fernando Alonso, the double world champion who is regarded as the clear number 1 at Ferrari.

"I am sure that if we were teammates, Fernando and I would have no problem. Alonso is a great driver for who I have great respect, and I think we would do great things together," he said.

Button is more open about his plans to help youngsters start their own F1 careers.

"It's not just (for) after F1, it's during F1," the 2009 world champion told Reuters, revealing his efforts to set up a driver management company with his manager Richard Goddard.

Hamilton looks to avoid tax with Monaco move
(GMM) Lewis Hamilton is considering a move from Switzerland to Monaco.

The Telegraph reports that the 2008 world champion is waiting for a vacant apartment on the glamorous Principality's Avenue Princesse Grace.

The report said the 26-year-old wants a "livelier lifestyle" than the one he has in Switzerland, but another factor could be the country's new income tax laws.

The UK government will share information with its Swiss counterpart that could mean residents like Hamilton have to pay millions in backdated tax.

"I am quite happy in Switzerland but it (Monaco) is definitely an option," said the McLaren driver.

He admitted that Monaco is a "spiritual" home for F1 drivers, including his McLaren teammate Jenson Button.

"Yeah," said Hamilton, "but I wouldn't move for spiritual reasons. I love where I live in Zurich, it is a spectacular place to live and it would be hard for me to leave there."

Hamilton meanwhile returned to the British newspaper headlines on Saturday following his latest reaction to criticism of his driving style and off-track personality.

"I'll take my driving style to my deathbed, for sure," he is quoted as saying.

Kubica will return as soon as he's fit – Boullier
(GMM) Eric Boullier has scotched reports Renault has definitely decided to conclude the 2011 season with Nick Heidfeld alongside Vitaly Petrov.

German Heidfeld was drafted in to substitute for team regular Robert Kubica, who is recovering from serious injuries sustained in a February rally crash.

But it has been rumored that relations between Enstone based Renault and Kubica's management is not all rosy, particularly after team figures and manager Daniele Morelli recently disagreed about the progress of the Pole's recovery.

German website motorsport-total.com quotes team boss Boullier as revealing at Silverstone that Kubica is "full of energy" after his latest surgery.

"I've spoken with Daniele and (Dr) Ricardo (Ceccarelli)," added the Frenchman. "It is more positive than expected."

Asked about Morelli's recent claim that Kubica might be fit to return at Interlagos in late November, he answered: "I hope that's true, but I'm not a clairvoyant."

Boullier did however scotch the suggestion that Renault will definitely race with Heidfeld alongside Petrov for the rest of the current season.

"We have a very clear agreement — when Robert is fit enough to return, he will return at that point."

The F1 chief executive currently works for the sport's majority owner CVC, whilst retaining a small percentage of the commercial rights for himself.

It has been reported recently that Rupert Murdoch's News Corporation in collaboration with the Fiat-linked Exor company is interested in buying F1, as are the grandee teams.

Asked if he is interested as well, Ecclestone told the International Herald Tribune: "Yes, absolutely.

Ecclestone, 80, was quoted recently as saying he thinks formula one is worth between $6 and 7 billion.

He reacted: "I have never quoted anything. It may have been written, but I haven't quoted. A gentleman never speaks about money and last night."

Brazilian veteran Barrichello, 39, said this week that while he wants to drive the team's new Renault-powered car in 2012, he is yet to be offered a deal.

"Well, I can't say anything about our drivers until we have made up our own minds," confirmed Williams at Silverstone.

Barrichello also said this week that he is not ruling out a switch to a rival team.

"He is truly a treasure trove of information and experience and that's something that will not be thrown away lightly," he insisted.

Asked if Barrichello has performed well in 2011, Williams answered: "Yes, I think he has. I think if we had given him a better car he would have been very close to the front, if not at the front. He is a superb driver."

When asked at Silverstone if he has thought about the green liveried team's 2012 driver lineup, owner and boss Tony Fernandes answered: "No we haven't, it's still very early days."

But the Malaysian millionaire opened up some more to the Finnish newspaper Turun Sanomat.

Asked how likely a new deal for Finn Kovalainen is, Fernandes answered: "It is very likely.

"Heikki is a consistent performer and always gets 100 per cent from the car. He gives a lot of energy to the team.

"Heikki has become a good friend, so if he is satisfied with us, I see no reason to change."

Turun Sanomat also asked Fernandes if Kovalainen is as popular within Team Lotus as Fernando Alonso is at Ferrari.

"Yes, definitely — although I don't know exactly how popular Fernando is at Ferrari," he laughed.