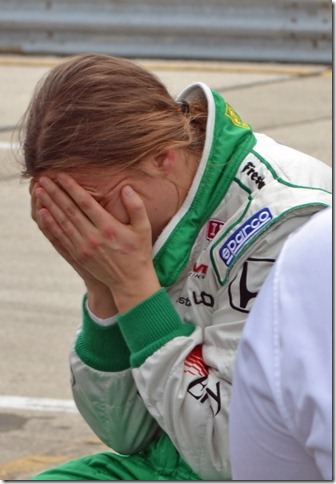 Only a few laps into Sunday afternoon's Milwaukee 225 race, Simona de Silvestro decided that she wasn't in the right condition to drive after the crash she was involved in during Saturday's qualifying session.

On Saturday, de Silvestro's car made contact with the SAFER barrier on the exit of turn four, in addition to the inside wall of the track.

De Silvestro was sent to Froedert hospital, where she was later released, and then met with medical staff on Sunday morning. She was cleared to drive and told her team she felt fine up until race time.

"Throughout the day, I thought I was ready to get out there, but it only took a lap or two to realize that I wasn't," said de Silvestro. "It's tough because the Nuclear Clean Air Energy team worked so hard last night to repair the car. I'm proud of them and thankful that they were willing to put in the hard work it took to be ready when the green flag dropped. Now I'm just going to focus on getting ready for the next race."

Next weekend, the IZOD IndyCar Series heads to Iowa Speedway for the Iowa Corn Indy 250, airing on VERSUS at 8 p.m. ET.