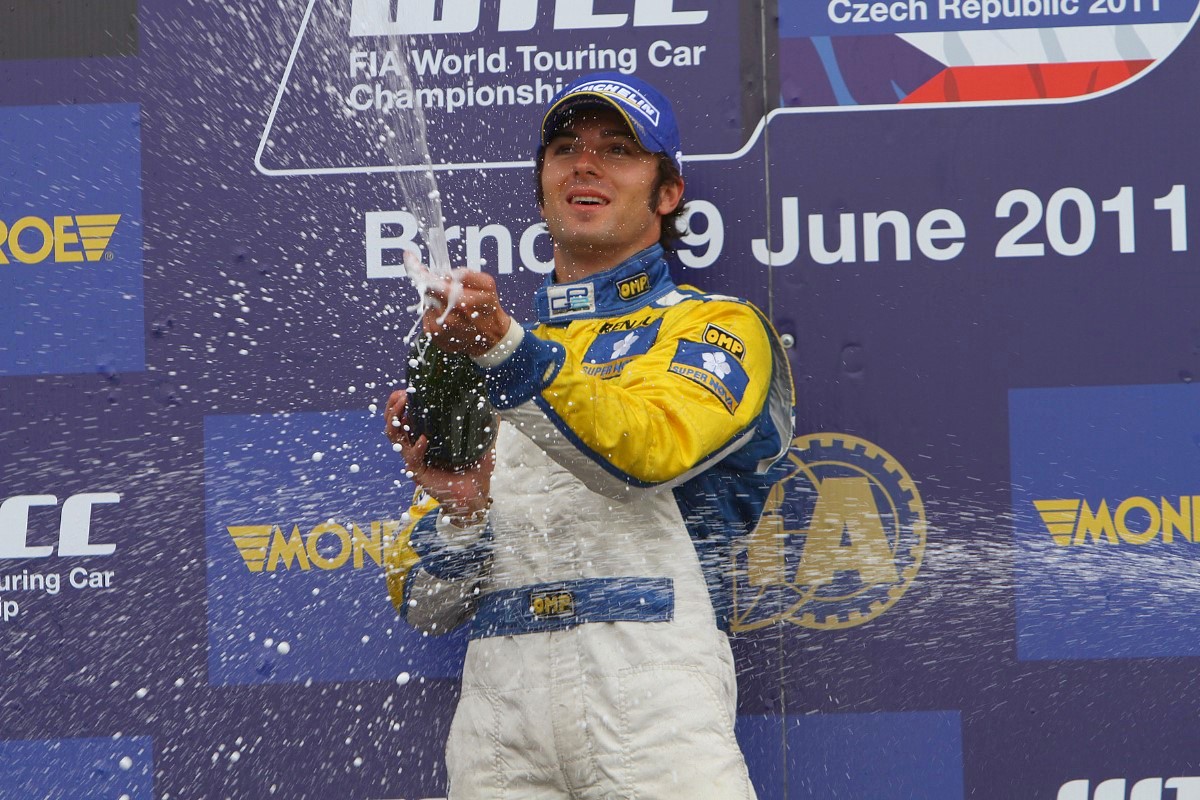 Luca Filippi has a very special feeling with the Brno circuit. The Italian driver, who last year won the Auto GP debut race on the Czech track, did the same today clinching an amazing win in a race that saw a really eventful first lap. At the start Rio Haryanto got off well and Filippi followed him, but in the back of the field Giovanni Venturini and Marco Barba made contact, involving also Francesco Dracone.

The rest of the field thundered towards Turn 2, but there something else happened: Bruno Mendez got on the dirt side of the track and lost the car, climbing upon Fabio Onidi and collecting also Adrien Tambay. With 6 cars out, the Safety-Car was called in to allow the track to be cleared, and on Lap 4 the drivers started to pit. Everybody made the most of the Safety-Car period changing tires, apart from Sergei Afanasiev, Samuele Buttarelli and Rio Haryanto: this cost the Indonesian driver the win, as changing tires after the restart meant dropping to P6 for him.

It was a pity because Rio was perfect at the start and then managed the re-start phase flawlessly, controlling the gap on Filippi. Haryanto's pit-stop cleared the way for the Italian driver of SuperNova, who just had to watch in his mirrors to keep Fabrizio Crestani at bay. The Lazarus driver passed Kevin Ceccon with a good start and then tried to put pressure on Filippi, but Luca answered that with some laps on the 1'43" pace that were enough to build a safety gap. Third was Ceccon: the 17 years-old Italian didn't have the best possible start but he made amends for that with a daring pass in turn 2, overtaking both Jon Lancaster and Onidi.

From then on his race was half trying to get closer to Crestani and half keeping an eye on Lancaster: the brit lost a lot of time avoiding the cars involved in the first lap carnage, but did his mandatory tire change as soon as the pit-lane was open and then boasted a staggering pace, passing Pasquale Di Sabatino and Giuseppe Cipriani on lap 5 and needing just a few laps to get on Ceccon's tail. Doing this, he also posted the fastest lap of the race with 1'43"511.

Behind him was Di Sabatino, passing from P12 to P5 with a clever race and closing in front of Haryanto. Further behind were Buttarelli and Afanasiev, both hampered by not coming in the pits when the Safety-Car was on track. Sergei will start from pole in Race 2 as he finished eight, ahead of Giuseppe Cipriani who took the first points of his season. After the race Bruno Mendez penalized for the first lap crash. The Spanish driver was handed a 10 position penalty on the grid, but the decision has been suspended: if in the next two races (Race 2 in Brno and Race 1 in Donington) Bruno will be involved in other race incidents the penalty will become effective.

Luca Filippi: "I'm lucky that Auto GP races in Brno because I really have a special feeling with this track. I don't know why but I've always been quick around here, and today was no exception. When Haryanto was in front I didn't push because I knew he had to pit, while I had to push in order to build a gap on Crestani. Winning Race 1 always feels great but today it's even better: in UK it's Father's day so I would like to thank my father and David Sears, who is my Godfather, for the support they are giving me. They deserve this win".

Fabrizio Crestani: "Finally I managed to throw away all the bad luck I had in the first two Events. The race was good, my start was ok and I passed Ceccon. From then on it was an easy race: I was hoping to catch Luca because in the first laps I had some margin, but then it was clear that he had a quicker pace than mine, so the result is fair. Now I hope to keep momentum, because I have a big gap to fill".

Kevin Ceccon: "On one hand another podium is very good, but I'm not really satisfied because I was quicker than Crestani but I didn't have a real chance to get close enough to try a move. On this track overtaking is not easy, and also Lancaster couldn't pass me even if he was coming really fast from behind. I'm very happy of my first lap: at Turn 2 I braked really late but despite this I did the corner easily, passing Lancaster and Onidi".