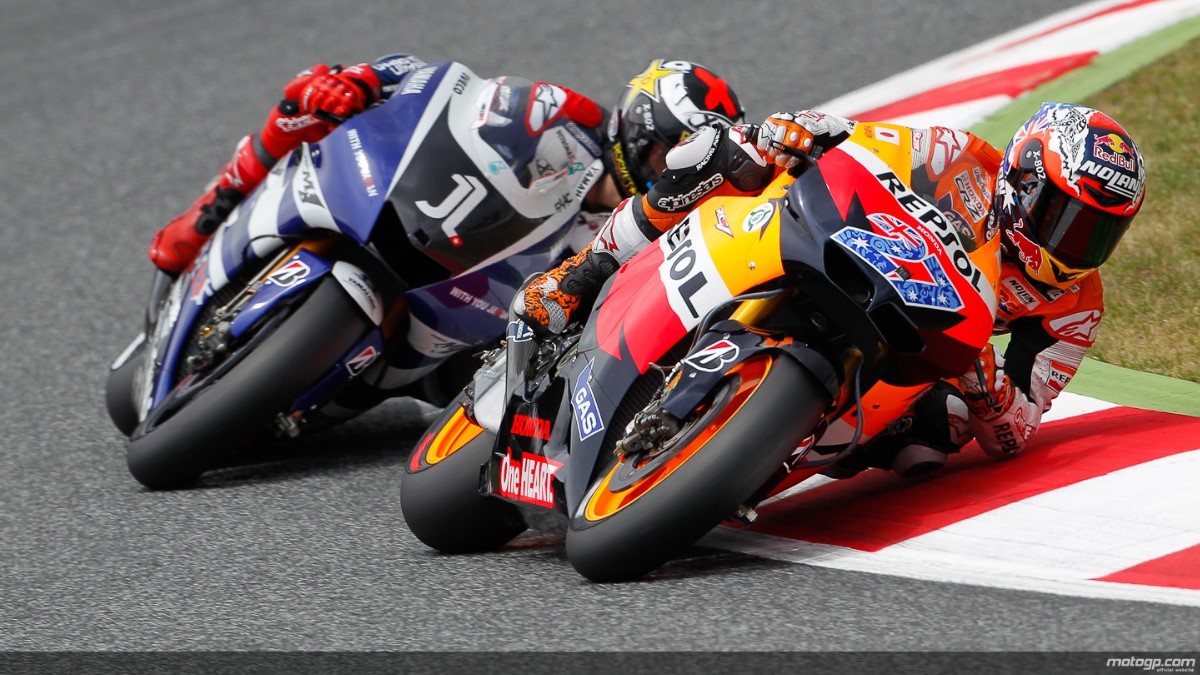 Despite missing out on pole position, Repsol Honda rider Casey Stoner took the lead in the second corner and faced no challengers for the entire 25-lap race. Reigning MotoGP World Champion Lorenzo finished just under two-and-a-half seconds behind him across the finish line, cutting the Mallorcan’s championship lead over the Australian to just seven points.

Lorenzo got a great start and was first into turn one, but he could not hold off Stoner, who passed the reigning World Champion in the second corner and held the lead. Ben Spies started from fourth and quickly moved in to third position, where he remained until he crossed the finish line for his first podium finish for Yamaha Factory Racing this year.

With 12 laps to go, drops of rain hit the track under threatening skies and the white flag was produced, allowing riders the option to change bikes for the anticipated downpour, though the rain drops stopped shortly after and none of the riders left the track.

Stoner’s teammate Andrea Dovizioso passed Ducati Team Valentino Rossi early in the race to pursue Spies, but remained in fourth position until the finish, where he crossed just under a second behind the American. Valentino Rossi crossed the line in fifth place. The seven time premier class Champion last won at the MontmeloÂ¢ circuit in 2009, when he beat his then team mate Lorenzo with a memorable pass on the Spaniard at the very last corner.

Marco Simoncelli (San Carlo Honda Gresini Team) started from his first pole in his MotoGP class career, but was unable to sustain the previous day’s momentum and finished in sixth.

Monster Yamaha Tech 3’s Cal Crutchlow had a good race after a solid weekend. The British rookie passed Nicky Hayden (Ducati Team) on the brakes going into the first corner on lap 10, and eventually finished the race in seventh, in front of the Kentucky Kid. The veteran Loris Capirossi (Pramac Racing) crossed the line in ninth, in front of Karel Abraham (Cardion AB Motoracing), who completed the top ten finishers.

Hiroshi Aoyama of the San Carlo Honda Gresini Team and Frenchman Randy de Puniet of Pramac Racing both crashed out of the race in the same corner early on. Both walked away from the tangle unharmed.

Both Dani Pedrosa (Repsol Honda) and Colin Edwards (Monster Yamaha Tech 3) were absent due to injuries that prevented them from lining up on the grid for the race. Edwards wanted to make the start so as not to put an end to his 141 consecutive premier class start run, but was denied after a medical exam declared him unfit to race.