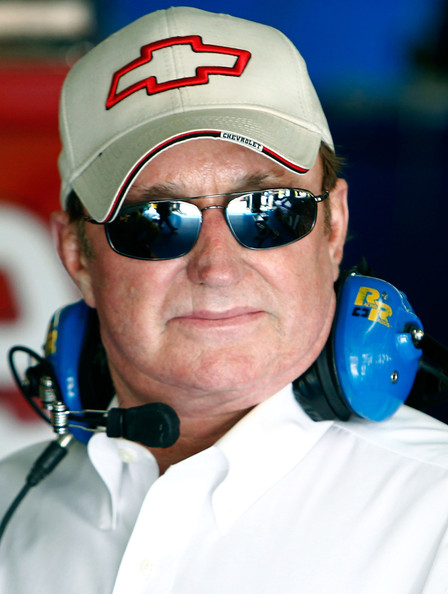 Helton, though, said Childress actions were not appropriate and that he faces penalties, which could be announced as early as Monday.

Media reports indicate that Childress threw multiple punches at Busch after the truck race. Busch and Richard Childress Racing driver Joey Coulter made contact on the final lap as they raced for fifth and Busch tapped the side of Coulter’s truck on the cool-down lap.

Here’s what Helton said in a brief session with reporters.

“After last night’s incident we began looking into it through the evening and as recent as 15 minutes ago meeting with different parties. We’ve concluded that the driver of the 18 truck, Kyle Busch, did nothing to provoke or cause the reactions, in our opinion, would have violated probation, did nothing that warranted the actions of Richard Childress. So, once we get today’s race concluded, which is the focus of today we’ll have to decide what NASCAR’s reaction to Richard Childress as a member of NASCAR and an action against another NASCAR member.

“The biggest topic today certainly through the conversations outside the incident itself was to be sure that today’s event went on correctly and safety for everybody involved and both the Richard Childress Racing and Joe Gibbs Racing organizations _ we’ve been clear to them that both Joe Gibbs and Richard Childress meet with their teams to be sure that nobody from their organization felt like that there was anything that needed to be done on their side. So, we’ll focus on today’s race now and then quickly, maybe more quickly than normal, come back with our reaction as it relates to NASCAR member Richard Childress.

QUESTION: What was NASCAR’s perception on what happened on the cool down lap between Joey Coulter and Kyle at the end of the truck race?

HELTON: “That kind of falls under the statement I made that we don’t think that Kyle did anything to violate his probation on the race track.

QUESTION: The Rule Book states that you can use an emergency action to eject someone and one of the reasons for an ejection is fighting. Was that considered with Childress?

HELTON: “We do have that ability. That was considered in this case. What will happen today is that Richard will operate as the owner of Richard Childress Racing with some restrictions attached to it as to where he may go or not go. We decided to let Richard stay because there does need to be leadership of an organization, which historically we rely on crew chiefs, but since both organizations have multiple teams and we decided that it would be better if there was an authority from the team and there’s not a second-level authority present this weekend for (Childress’) organization. Joe Gibbs is here from Joe Gibbs Racing and we chose to allow Richard to participate today.

QUESTION: Did anything Kyle did in the garage violate his probation?

HELTON: “Unless you know something that we don’t know, I’m not sure what he did in the garage that would have been in question.

QUESTION: What have you been told happened in the garage?

HELTON: “I’m not going to go through all the details. We haven’t seen anything that indicated that Kyle violated his probation on the race track yesterday or in the garage area.

QUESTION: Are you looking at Kyle Busch driver as opposed to Kyle Busch as owner since Kyle Busch the driver has a history with the RCR Company that dates back.

HELTON: “We look at them as members of NASCAR. Kyle Busch is a member of NASCAR, other drivers, crew members, car owners are members of NASCAR. Our authority is around NASCAR members and that’s the way we look at them as NASCAR members. Certainly we investigate to get the totality of everything we need to make the decision, but the reaction from NASCAR is focused on what happened yesterday.’’

QUESTION: Has fighting in the garage changed in how it is viewed in the sport?

HELTON: “I think that throughout the history of NASCAR we’ve gone through cycles of everything, including tempers in the garage area and on the race track. I think our responsibility lies in reacting to those trends and if it is a trend we feel escalates, we have a history of stepping in and turning those trends around.’’ Hampton Roads