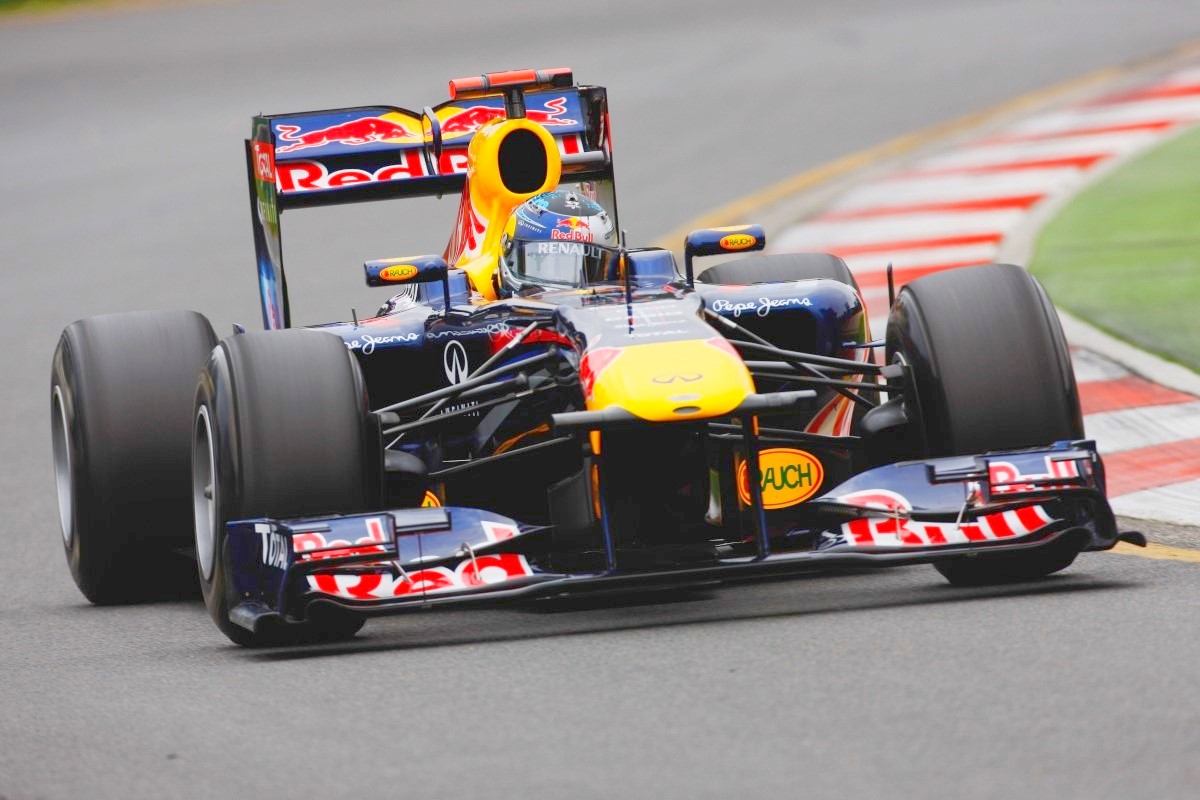 Red Bull to use KERS in Malaysia
(GMM) Red Bull will use KERS at next weekend's Malaysian grand prix.

The reigning champions did not have the energy-recovery system fitted to their RB7 cars in Melbourne as Sebastian Vettel strolled to pole position and the win.

But team boss Christian Horner said: "We will run KERS in Malaysia.

"It was a very marginal decision not to run it (in Australia)," he told the Guardian. "In Malaysia there is a long run to the first turn and we are keen to get it on the car there."

Championship leader Vettel, however, has mixed thoughts. He told Bild newspaper that KERS is a "fundamental tool" this year that is worth "three to five tenths per lap".

"We're working on having it on the car," he added.

But in Auto Motor und Sport, the 23-year-old is quoted as saying: "It's expensive, complicated and not green."

Vettel flew to Bali for a holiday after winning on Sunday.

As the paddock took shape last week in Melbourne, Michael Schumacher predicted the W02 car might be Red Bull's closest challenger this year.

But the Brackley-built car was in fact two seconds off the pace in qualifying before the seven time world champion retired "for safety reasons" with a damaged floor.

"The team said 'stop, it makes no sense, it's too dangerous'," Schumacher told Bild newspaper.

"Mercedes was lucky to have failed cars, so that nobody could see how slow they were," Red Bull team boss Horner joked to the German newspaper.

"I can't tell you how good we would have been in the race because my car was damaged in the third corner. But it definitely would not have been easy.

"After the encouraging winter tests we came here with very different expectations," he said.

"To panic or to rush would be the ideal recipe for failure," Welt newspaper quotes him as saying.

The British driver took a short-cut on the inside of Albert Park's high-speed chicane on Sunday as he passed Ferrari's Felipe Massa.

"I feel a bit harshly treated," boss Whitmarsh is quoted as saying by British newspapers.

"As the incident happened we asked race control for their advice, what we should do. They explained they would come back to us and they didn't," he revealed.

"The next thing we knew it had gone to the stewards, Massa had stopped and we were unable to do anything about it. When they say 'We'll get back to you', you expect, to be honest, that they'll get back to you.

"It's frustrating and its annoying," he added.

At the same time, Button admitted to suspecting that Ferrari called Massa in for new tires immediately after the incident so that he would not be able to simply let the Brazilian back into position.

"I don't know if Ferrari pitted Massa on purpose so I would get a drive-through, fair enough if they did. That's the way it is," he said.

"Maybe it was done on purpose, maybe not. I just don't know why he was so slow. It screwed both of us," added Button.

Overall, however, Whitmarsh admitted he was happy with the pace of the MP4-26 in Australia, with Lewis Hamilton finishing second after a dire winter season.

"Two weeks ago I would have snatched your hand off for that result," he said.

Sauber's Perez stuns paddock with one-stop race
(GMM) F1 rivals and even Pirelli admitted to being surprised after Sauber rookie Sergio Perez made only one pitstop for new tires in Melbourne.

Ultimately, the Mexican newcomer had his seventh position taken away by the FIA after irregularities with the C20's rear wing were found by scrutineers.

But his ability to get through the race on a one-stopper following a winter of talk about Pirelli's extreme degradation shocked many in the paddock.

Felipe Massa admitted he was surprised.

"The rear tires degrade quickly and certainly for us to do a one-stop strategy like Perez would have been unthinkable," the Ferrari driver, who stopped three times at Albert Park, told La Gazzetta dello Sport.

"We were all looking and saying 'He (Perez) has to stop, surely'. We actually thought the numbers were wrong and we had missed a stop," he is quoted by autohebdo.fr.

"His driving style was a key factor, as well as his car. But I would be surprised if we see it again," added the Briton.

Pirelli's former test driver Pedro de la Rosa, speaking to Spanish La Sexta television, agrees: "I can assure you that in Malaysia there will be 3 or 4 stops, just one I see as impossible."

FIA flags wing system tweak after China
(GMM) After the system's debut in Melbourne, Charlie Whiting has admitted tweaks are likely to the rules governing adjustable rear wings in 2011.

On Albert Park's pit straight, the use of the new 'drag reduction system' proved largely ineffective, with Jenson Button notably failing to pass the much slower Felipe Massa.

"It is true that the effectiveness of this system in Melbourne was not ideal," admitted the FIA's race and technical director Whiting.

"The straight is too short and the corner before it too fast," he is quoted by Swiss newspaper Le Temps.

"We'll see what happens in Malaysia and China and then adapt the system as needed," added Whiting.

The hard and soft compounds at the 2011 season opener were distinguishable by the color of the 'Pirelli P Zero' signage on the sidewalls — silver for the prime and yellow for the options.

Also to be seen this year are white-sidewalled medium tires, and red for the super-soft.

"With the yellow markings, I think, there was no problem, it could be seen," Pirelli's motor sport director Hembery told Auto Motor und Sport.

"With the black tire, I think the silver (markings) was a little more difficult," he admitted. "But if that's my biggest problem, I'm very satisfied."

Indeed, the entire world of F1 was surprised with the performance of the tires in Australia, following a winter of extreme degradation.

"We will definitely be treating ourselves to a beer tonight," Hembery said late on Sunday.

107pc rule to keep slow cars 'out' in 2011 – Whiting
(GMM) Hispania will be excluded from more grands prix in 2011 if the struggling Spanish team does not up its pace.

That is the suggestion of FIA race director Charlie Whiting, after the untested F111 car did not get within 107 per cent of the Q1 provisional pole time in Melbourne.

The 107pc rule has returned in 2011 following the debut of three less competitive teams last year, with the Virgin cars only narrowly qualifying at Albert Park.

HRT's Colin Kolles argued after qualifying that Narain Karthikeyan and Vitantonio Liuzzi should be allowed to race "under exceptional circumstances", but the stewards did not agree.

Given the 107pc rule, stewards may permit a driver who has not qualified to race if for example he has set "a suitable lap time in a free practice session".

But Whiting is quoted by Gulf News: "If you're out, you're out."

Reigning world champion Vettel got his 2011 defense off to the best possible start at the weekend by easily strolling to pole position and the win.

But some rivals, notably McLaren's Lewis Hamilton, took heart in the fact that he was able to finish just 22 seconds behind the young German whilst nursing a broken floor.

"I can win in this car. I can go for the title. We'll close the gap on them, no doubt about that," Hamilton said before leaving Albert Park.

But Marko said Vettel, a vast 8 tenths ahead of Hamilton in qualifying 24 hours earlier, had paced himself in the race.

"Sebastian based himself on his opponents, setting his pace according to the competition — especially Hamilton," the Austrian told German broadcaster RTL.

"We just wanted the gap for a pitstop or in case the safety car came out," added Marko. "In the end he was just protecting the tires.

"Let's see what happens next, but I fear it might be boring for us," said the famous triple world champion. "I see no reason why Malaysia should be any different."

Ferrari, however, is banking on a surge of form following a disappointing opening salvo in Australia.

"I'm convinced that things will change," said Felipe Massa, who finished almost a lap behind and was derided as being "so slow" by Button after their long duel.

"Not at any of the winter tests did we go so badly," he is quoted by Italy's La Gazzetta dello Sport.

Ferrari has a lot of work ahead
Despite achieving the most laps across winter testing, Ferrari were unable to collect more than final results of fourth and seventh in Sunday’s Australian Grand Prix. The Italian team admits that crucial technical and strategic improvements must be put to effect in Malaysia.

“We have a lot of work ahead of us, that’s for sure," explained Assistant Technical Director Pat Fry, who moved to Ferrari from McLaren last year. “This weekend, the 150Â° Italia was not as competitive as we would have liked and that’s a fact – both in the race and in qualifying Red Bull and McLaren were quicker than us.

“In terms of how we managed our strategy, I think that with Fernando we made the right choices, given what happened on the opening lap, when he found himself back in ninth place. Thanks to the pit-stops and some good passing moves, the Spaniard managed to move up the order to fourth and he was fighting for a podium finish right up to the final lap.

“However, with Felipe we probably made a mistake towards the end, which cost him maybe one place. Now we all have to roll our sleeves up, at the track and back home, to try and arrive in Malaysia in better shape."