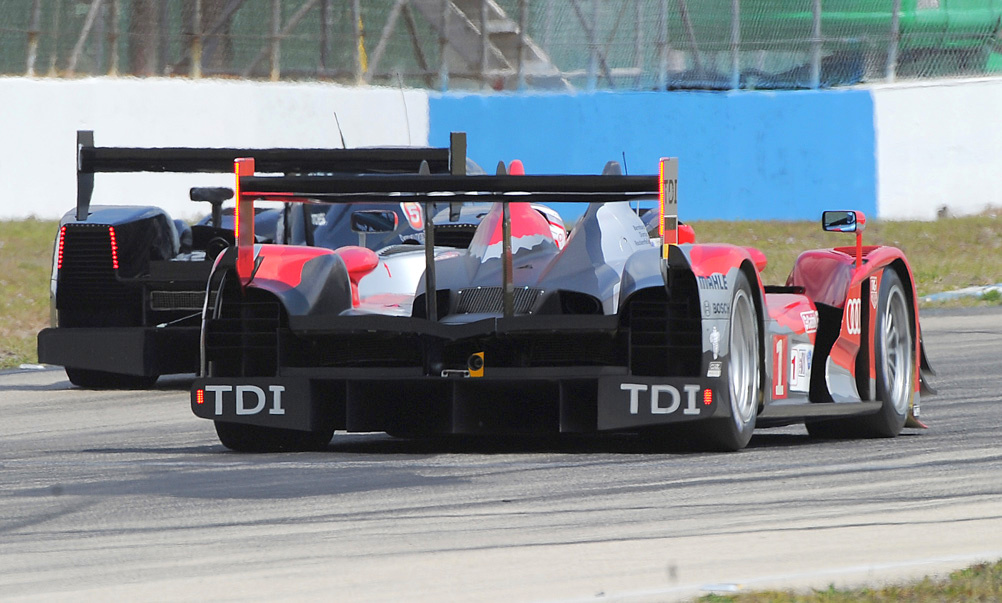 Monday and Tuesday were considered 'test' sessions. Romain Dumas laid down the gauntlet for Audi Sport in the opening practice for the 59th Mobil 1 Twelve Hours of Sebring presented by Fresh from Florida. The flying Frenchman set a best lap of 1:49.253 in one of Audi Sport Team Joest’s Audi R15 Plus prototypes Thursday morning in the lead-up to the season opener for the American Le Mans Series presented by Tequila PatrÂ¢n.

Dumas, driving with fellow Le Mans 24 Hour winners Timo Bernhard and Mike Rockenfeller, was 0.784 seconds quicker than Allan McNish in the second factory Audi. McNish, who will drive with Tom Kristensen and Dindo Capello, had the quickest time until about the 45-minute mark of the hour-long session. The Audis are back at Sebring for the first time since winning the 2009 race in the debut for the R15.

Team ORECA Matmut’s Nicolas Lapierre set the third fastest time of the session on his final lap – a 1:50.296 in the Peugeot 908 HDi FAP that he will drive with Loic Duval and Olivier Panis.

In the GT class, Toni Vilander set the class’ fastest time on his final pass in Risi Competizione’s new Ferrari F458 Italia. His lap of 2:02.251 in the car he will share with Jaime Melo and Mika Salo was just 0.109 seconds better than Bill Auberlen in the first of BMW Motorsport’s BMW M3 GT. The car of Auberlen, Augusto Farfus and Dirk Werner had been quickest in three of the four test sessions earlier this week.

Auberlen was just 0.277 seconds ahead of Dirk MÃ¼ller in the second BMW, who set a time of 2:02.637. He will drive with Joey Hand and Andy Priaulx as BMW starts what it hopes will be a repeat of last year’s class manufacturer championship.

Lucas Ordonez kept Signatech Nissan on top in LMP2, as it was during the Monday and Tuesday test days. The Spaniard’s lap of 1:57.991 in the Nissan-powered ORECA 03 outpaced both of Level 5 Motorsports’ Lola-Hondas, among others. Luis Diaz was next-quickest in the team’s open-top prototype at 1:59.964 that he will drive with team owner Scott Tucker and Ryan Hunter-Reay. Level 5’s coupe of Tucker, Joao Barbosa and Christophe Bouchut – who set the car’s fastest time at 2:01.236 – was up next.

In the team’s first on-track session at Sebring, Proton Competition’s Porsche 911 GT3 RSR was first in GTE Am thanks to Richard Lietz’s lap of 2:04.305 in the car he will share with Christian Ried and Gianluca Roda. Next up was Krohn Racing’s Ferrari F430 GT of Nic Jonsson, Michele Rugolo and team owner Tracy Krohn, who posted a time of 2:06.752. Larbre Competition’s Corvette C6.R sat third with Gabriele Gardel’s lap of 2:10.709; he will drive with Julien Canal and Patrick Bornhauser.

Ryan Lewis’ final lap of 1:56.679 for PR1/Mathiasen Motorsports topped the LMP Challenge field. Lewis will drive the team’s ORECA FLM09 with Henri Richard and Ken Dobson, and the Englishman was 1.305 seconds quicker than Ryan Dalziel in the first of CORE autosport’s two entries that he will share with Jon Bennett and Frankie Montecalvo.

In GT Challenge, Leh Keen went quickest in Alex Job Racing’s Porsche 911 GT3 Cup entry that he will share with Brian Wong and Bill Sweedler. The fact that Keen, who set a time of 2:07.155, went quickest shouldn’t surprise. He set the class’ 20 fastest race laps in a victory last year with AJR.

Black Swan Racing’s Sebastiaan Bleekemolen was a scant 0.024 seconds back of Keen in the car that he will drive with Damien Faulkner and team owner Tim Pappas. Black Swan won last year’s class championship but did not race in the 12 Hours.

Sean Edwards was next up in the NGT Motorsport Porsche that he will drive with Carlos Kauffman and Henrique Cisneros with a lap of 2:07.245.