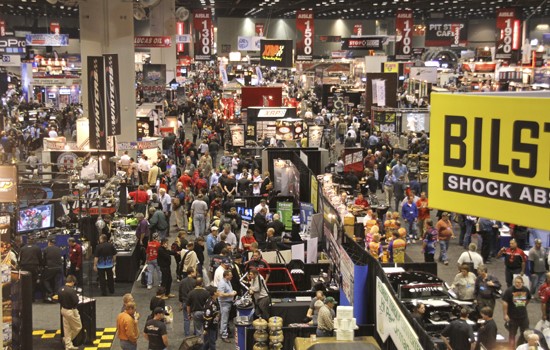 The 2010 PRI Trade Show opened to big crowds and excited buyers and exhibitors on the first day of the three-day show at the Orange County Convention in Orlando, Florida, Thursday. The event is widely viewed as the three biggest business days in auto racing.

The day began with a packed opening day breakfast as SPEED’s Dave Despain brought a live version of the popular Wind Tunnel program to the day’s festivities. He was joined on set by SPEED personality Robin Miller, NASCAR driver Ken Schrader and racing legend Bobby Rahal, as well via a phone by Hall of Fame promoter Humpy Wheeler.

“We couldn’t have asked for a better start," said Steve Lewis, PRI Trade Show producer. “We were busy from the opening Breakfast until the close of the show today. It appears people are in a buying mood – and traditionally, Friday is our busiest day, so things should be even better tomorrow. It’s a great sign for the entire industry."

Representatives from throughout the racing industry were on hand today as the show opened for business.
“PRI gives us a chance to get a lot of things done," said Kody Swanson, winner of the recent Turkey Night Grand Prix Sprint Car race, who was here representing TK Motorsports. “I’ve been coming to the PRI Show since 2005 when I turned 18 and we’re always looking at product. PRI has really helped us develop relationships with companies that are known for their outstanding product and that enables us to be on the front edge of the latest technology being introduced."

In addition to his appearance on Wind Tunnel, Rahal also was seen later on the show floor in his role as a team owner for Rahal Letterman Racing.

“I think this is a fabulous show," said the 1986 Indianapolis 500 winner. “Frankly, there’s a lot for everybody. No matter what part of the sport you’re in, you can learn from seeing what other people are doing. There’s just so much here that you don’t know where to start."

Of course, you didn’t need to be a racing legend to enjoy what the PRI Trade Show had to offer as buyers came from around the world to inspect the latest technology on hand.

Similar reports of heavy sales came from the exhibitor end, as well.

“This has been a real strong show, said Drew Pate, of Safety Kleen. “There’s been a lot of people and a lot of activity. People are spending their money. In fact, some are paying cash right here on the spot and we’re delivering product by as early as next Tuesday. We’re very happy."

Over 35,000 racing business people from all 50 states, and 65 countries, are expected to be in attendance this year’s PRI Trade Show to get current with the latest in racing technology courtesy of the 1,000 motorsports companies introducing their new lines in racing products, machining equipment, motorsport engineering solutions and more.