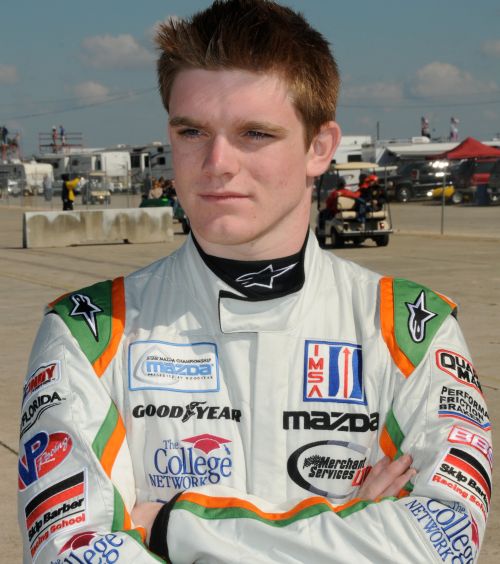 With Indianapolis native Conor Daly leading the way, drivers from six countries took to the track for two days of intensive testing at O'Reilly Raceway Park. After eight 45-minute on-track sessions, a total of six hours, Daly's lap of 20.187 sec. (122.336 mph) around the .686-mile oval asphalt oval in his #22 Juncos Racing / INDECK / The College Network / Merchant Services Ltd. / Tom Lange Co. Mazda put him among the open-wheel elite who have made their mark at this historic track.

"The track temperature makes a huge difference here, and we qualify in the afternoon and race at night," says Daly, who graduates from Heritage Christian High School on May 14th. "So we might or might not out-qualify the Midgets, but either way the fans are in for a hundred laps of wheel-to-wheel Star Mazda racing. The fast line around the track is right up next to the wall where the banking is the steepest, so the keys to the race will be qualifying up front, managing your tires and setting your car up so you can move to the inside to pass when you start hitting traffic. The Iowa oval was probably the most fun race last year so I'm really looking forward to the Night Before the 500 and I know the Juncos Racing team will give me a competitive car."

The O'Reilly Raceway Park / Night Before the 500 race will be Round 4 of the 11-weekend, 13-race Star Mazda Championship 2010 schedule. This is one of two ovals the Series will compete on during the season, including the 1.0-mile Iowa Speedway track on June 19th of the IndyCar weekend. As part of both the IRL 'Road to Indy' program and the MAZDASPEED Motorsports Driver Development Ladder, Star Mazda drivers receive a comprehensive education, competing on road courses, street circuits and both long and short ovals.

"I did a midget test at few years ago, and I've run a couple of Legends races at the Las Vegas bullring, but this will be my first oval-track race in a high-downforce open-wheel car with wings and slicks," says the resident of San Clemente, California. "O'Reilly Raceway Park is a high-risk track because you have to run so close to the wall to be fast, but once you've got the car set up and the rhythm of the place figured out, its good racing. There are a lot of variables for the driver to deal with, qualifying in the day and racing at night, fuel loads, tire wear and track temperature, which has a huge effect on handling and lap times. The key to the race will be engineering a consistent car that maintains its performance over the course of the race – and staying out of trouble."

On-track activities for the Star Mazda Championship begin with multiple practice sessions starting Friday afternoon at 4:10 pm and ending with a final 1-hour session from 9:50 – 10:50 pm. Single-car qualifying begins at 2:30 pm Saturday, May 29, with the field scheduled to take the green flag for the start of the 100-lap/45 minute race at 8:10 pm.

Activities surrounding the O'Reilly Raceway Park / 'Night Before the 500' event begin with a Road to Indy autograph session during Community Day at the Speedway on Wednesday, May 26. Thursday, May 27 will be taken up with various Road to Indy activities at the Speedway. On-track action begins with a 3:00 pm practice session on Friday, May 28. Sessions alternate between Star Mazda and USF2000 until 10:00 pm in the evening. The 1-hour qualifying session for Round 4 of the 2010 Star Mazda Championship begins at 2:30 pm, Saturday, May 29, with the green flag scheduled to wave for the start of the 100-lap / 45-minute race at 8:10 pm. The record for a 100-lap USAC Midget race was set in 1965 by Bob Wente; he covered the distance in 44:04.38 at an average speed of 93.391 mph.