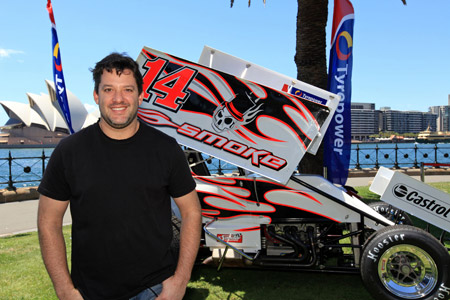 Two-time NASCAR Sprint Cup Champion Tony Stewart landed in Sydney, Australia today ahead of his four-night campaign at Tyrepower Parramatta City Raceway over the next fortnight.

Stewart, 38, is one of the world’s most successful motorsport drivers having won not only in the highest level of Stock car racing but he was also crowned the 1997 IndyCar Series Champion.

His visit this year, which coincides with a well-earned end of year holiday, will see him take to the famous Parramatta dirt oval track against some of the world’s best drivers behind the wheel of an 800-plus horse-powered SprintCar.

The past 12 months has been one of the busiest periods in Stewart’s life having completed his first year as a driver/owner in the NASCAR Sprint Cup Series with Stewart-Haas Racing and he is using his Australian trip to relax while combining it with some racing.

“I’m really looking for some time off after a really busy year. I really didn’t have an off-season last year as we spent so much time putting everything together for my first year as a driver/owner with Stewart-Haas Racing," said Stewart.

“This trip will be the first time in almost two years that I’ve been able to get away and not have to worry about a schedule. I’m really looking forward to enjoying some relaxation, mixed in with a bit of racing."

“Apart from the racing I really don’t have any plans. I’m just going to take everything as it comes.

“My life seems to be scheduled in five-minute increments, so whatever I end up seeing is going to be more spur-of-the-moment than anything."

With four wins throughout 2009 that led to him finish sixth in the points standings Stewart believes that the debut year for Stewart-Haas Racing was a successful one.

“There was a lot of change for everyone who came to Stewart-Haas, and to get all the people organized, get them working together, along with getting all of our equipment ready, I think we did fairly well, and from that standpoint, I don’t think I could be any happier.

“Obviously, we wanted to win the championship this year and after leading the point standings, we felt like we had a good shot. We just couldn’t get that run in the last 10 weeks that we wanted. But we’ll do whatever we can next year to try and pick up on that and improve on it."

While pleased with his own performances this year Stewart has also been impressed by Australian Marcos Ambrose since he made his debut in the NASCAR ranks.

“Marcos has really done a great job. You can tell he wants to not just be there, but be successful there. And he’s done that," said Stewart.

“He’s won Nationwide Series races on the road courses, and he’s also gotten better and better on the ovals. Each year, you see him up front more often. He’s very motivated, and that’s the way you have to be in order to find success."

After competing in 36 Sprint Cup races throughout the year, along with a number of events on the short track – which included a win aboard a Sprintcar at the Lou Blaney Memorial race in Ohio, USA – Stewart could have been forgiven for wanting some time away from racing. However, he says that he a true racer and is really looking forward to having some fun over the next fortnight.

“Racing is what I do, and it’s also what I love. Dirt track racing, especially with Sprint Cars and Late Models, is fun," said Stewart.

“So, yeah, it’s still racing, but it’s the kind of racing I love to do just for fun. I’m also looking forward to hanging out with a lot of my friends from the SprintCar side and having the opportunity to race with them."

Stewart raced at Tyrepower Parramatta City Raceway during the formative years of his career and has some fond memories of the venue.

“God, it’s been a while… but I remember it being a good, racy track. You could move around and make things happen if the car was handling," said Stewart.

“Obviously, the local fans are pretty passionate about sprint car racing, so it creates an exciting venue to race at."

The American trio will take to the track for the first time on Saturday December 26 for the Valvoline Australian Sprintcar Grand Prix before backing up a few days later (December 29) for the Hogs Breath Sprintcar International. The December 29 event will also feature a Demolition Derby.

On the first weekend in the New Year (January 2 & 3) Stewart, Schatz and Shaffer will be joined by fellow American Jason Johnson and Australia’s best including Brooke Tatnell, Max Dumesny, Robbie Farr, Ryan Farrell and Kerry Madsen to battle for the $50,000 to win Scott Darley race presented by Coca Cola.