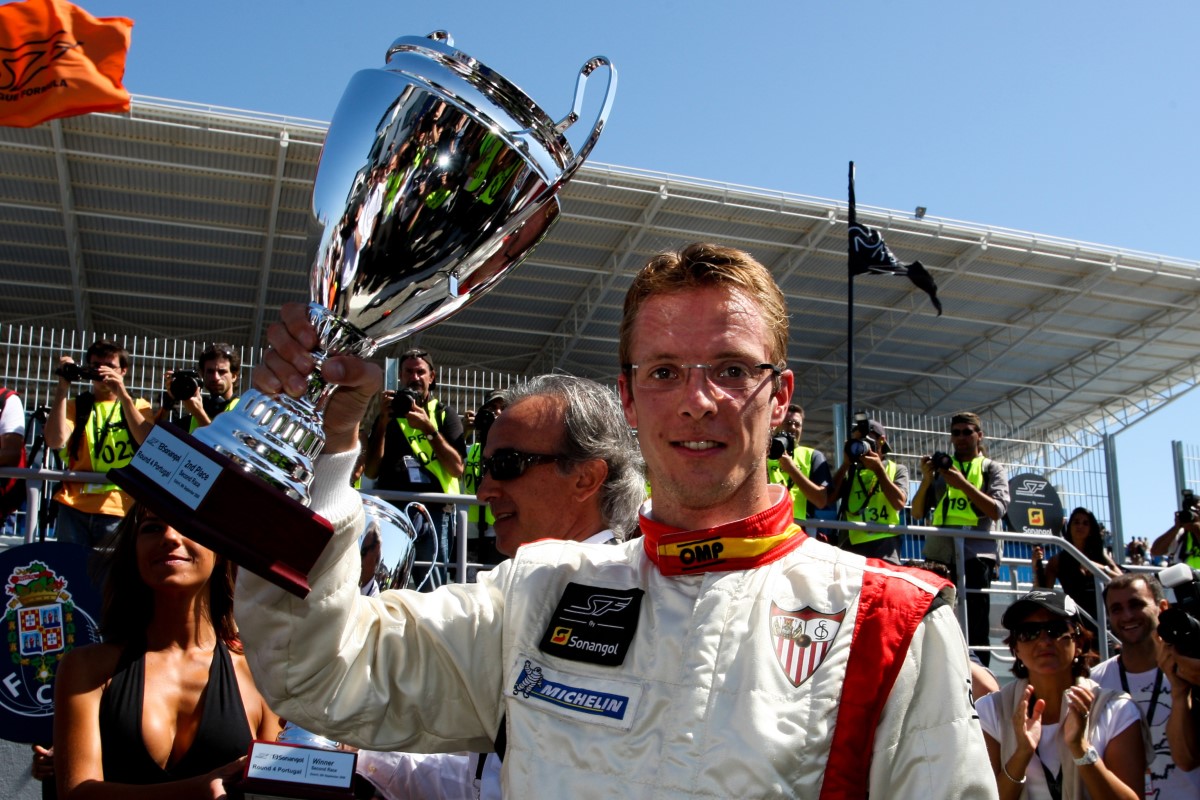 UPDATE Added photos of Bourdais below.

The Frenchman, who recently lost his place on the Formula One grid, bounced back in the best possible fashion by producing a stunning drive, taking second in race 2 to qualify for the weekend-ending six-car sprint, before going on to win.

Starting from fourth in the five-lap Super Final, he dived past Anderlecht into turn 1 to take third and was into second when Corinthians driver Antonio Pizzonia slid wide and out of the lead in turn 4.

With just Liverpool standing beaten him and a memorable debut victory, Bourdais sliced up the inside of Adrian Valles’ car before the end of the lap and never looked like losing his lead from thereon.

Olympiacos’ Esteban Guerreri, who earlier took a superb win in race 1, followed Bourdais past Liverpool for second, having started from fifth, with Valles holding off Anderlecht driver Yelmer Buurman for the final podium spot.

Spaniard Valles may have missed the top prize in the Super Final, but he boosted Liverpool’s championship hopes massively during the weekend with a strong points haul from the two main 45 minute races. He extended the English club’s lead at the top of the Superleague Formula by Sonangol League Table to 58 points as both his major rivals hit trouble.

FC Basel, whose young driver Max Wissel starred in the last round at Donington, were lying in second going into the weekend but didn’t even start the first race due to gearbox problems before finishing 11th in a troubled race 2. Tottenham Hotspur’s Craig Dolby, third heading to Portugal, managed a solid eighth in race 1, but retired on the first lap of the second race. Although Spurs moved to second in the table, the London-based club has lost significant ground in the title race to their FA Premier League rivals.

Earlier, the 45 minute-long race 2 saw a popular ‘home win’, despite Estoril very much being Sporting Lisbon territory, for FC Porto whose fans celebrated Alvaro Parente’s victory, the Portuguese club’s second triumph in as many weekends after Tristan Gommendy took the race 2 honors at Donington.

From the front row of the grid following his race 1 retirement, lifelong Porto fan Parente beat pole sitter Galatasaray off the line but was still in second at the first corner as Flamengo’s Enrique Bernoldi made a stunning start from row 3 to lead.

Sevilla’s debutant Bourdais was also a fast starter as he went from seventh to third on the opening lap ahead of AS Roma’s Franck Perera who made similar gains going from 12th to fourth!

Bernoldi was three seconds clear at the pit stop, but Flamengo’s decision to bring its car in after all their rivals didn’t pay off as he lost his lead to Parente.

Bourdais then demoted Flamengo to third and began the pursuit of the Porto car five seconds up the road. The Frenchman showed stunning speed as he closed the gap to under a second, but Parente responded in the last five minutes to ensure victory for the reigning Portuguese League champions.

Bourdais was second for Sevilla, with Bernoldi holding onto third for Flamengo. Yelmer Buurman produced a star performance to finish fourth for Anderlecht, despite being forced off the track at turn 2 at the start. He stormed back through the field, passing AC Milan and Corinthians in the final stages to just miss out on a podium.

Antonio Pizzonia was fifth for Corinthians after charging through from 16th on the grid whilst Giorgio Pantano was sixth for Milan. Ho-Pin Tung, who started from pole on the fully reversed grid, was seventh for Galatasaray, holding off John Martin for Rangers and the table-topping Liverpool car of Valles who settled for strong points after main challengers Tottenham and FC Basel suffered problems. PSV Eindhoven’s series debutant Carlo Van Dam completed the top ten.

Perera’s fine drive in the AS Roma machine didn’t earn its due rewards as a problem at his pit stop put him out of fourth place and left him outside the top ten at the checkered flag. Race 1 winner Olympiacos, starting from the back of reversed grid, suffered some contact on the opening lap which forced Esteban Guerrieri to pit for a new nose. He rejoined two laps down and showed prodigious pace on his way to 14th.

Sevilla FC: Sebastien Bourdais (FRA)
“This feels pretty good! It’s nice to be back on the top step of the podium again. This has been a rollercoaster weekend with lots of ups and downs. We started slowly but picked up the pace all the way through and now it has finished with a massive high. I’ve never even attempted a standing start in this car before, but it went pretty well in the Super Final. I was using a new set of tires that allowed me to push and I was able to get through to win. This championship is pretty tough. There are lots of very good drivers all using the same machinery which makes it a real challenge. But if I can continue to learn the car and repeat what we achieved here in the next two rounds, then I am definitely up for it!"

Olympiacos: Esteban Guerrieri (ARG)
“I’m really proud for the team who has done a very good job all weekend long. The car has been consistently fast which we showed by winning race 1. In the Super Final I tried to push Sebastien as hard as I could to force him into a mistake, but he drove really well. I’m happy for all Olympiacos fans and now I’m hoping to stay with the team for the final two rounds of the season."

Liverpool: Adrian Valles (ESP)
“Our aim before the start of this weekend was to create a big gap to our rivals in the championship race and we have done that. We’re extremely competitive and more wins are possible for the rest of the season and we need to keep pushing to increase our advantage ahead of the final round at Jarama. We can’t relax because everyone is really quick and teams like Corinthians have shown real pace this weekend which can make them a threat."