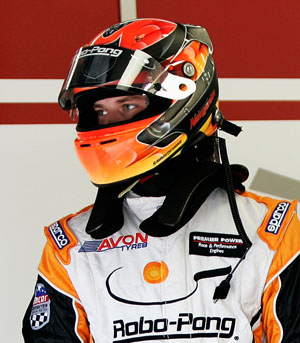 Rising American talent Josef Newgarden resumes his chase of a European championship title this holiday weekend (September 5-6), with Rounds 19, 20 and 21of the MSA Formula Ford Championship of Great Britain at the famed Brands Hatch Circuit. The Joe Tandy Racing rookie enters the first of back-to-back events at the English race circuit second in the championship fight, and as a six-time series race winner.

For Newgarden, the seventh event of the 2009 British Formula Ford season marks his return to the track where he scored the most significant victory thus far in his burgeoning race career. As a member of the prestigious Team USA Scholarship program, Newgarden made history last fall at Brands Hatch, when he became the first American to win the world renowned Formula Ford Festival, earning the Kent class victory. The 18 year-old followed up that historic moment this past spring with two additional wins at the high-speed road course, taking two of three in the season-opening Formula Palmer Audi Championship as a guest driver.

Given Newgarden’s previous success at the Brands Hatch Circuit, it should come as no surprise that the No. 21 Robo-Pong/Race of Tomorrow Ltd/Joe Tandy Racing/Mygale SJ08 Premier Power car will be one both the fans and fellow competitors will be keeping a close eye on throughout the three-day event.

Running in conjunction with the lone German-based DTM touring car series event in England, Newgarden will be focused on reducing the gap to the championship leader. With race wins in five of the six events contested thus far, the JTR race pilot, who now resides in Oxford, England, has not only taken over control of the Rookie of the Year fight in the British Formula Ford Championship, but also positioned himself to challenge for the overall title when the final checkered flag waves in early October.

“I’m not putting any extra pressure on myself due to the points championship," commented Newgarden. “As always, I plan on getting the most out of my car this weekend and executing a smart race strategy. No matter how the championship ends up, I’m looking to move up next year! Hopefully, my performance during the final few events will catch the attention of the right people in the racing industry."

Newgarden’s JTR Mygale will feature additional livery this coming weekend, with the American joining the “MAKE ROADS SAFE" campaign. The program calls on the international community to recognize road traffic injuries as a global health epidemic, and to take urgent action to stop the daily tragedy of preventable deaths and injuries. More information at www.makeroadssafe.org

Official on-track action for Newgarden and the rest of the MSA Formula Ford Championship of Great Britain competitors commences on Friday (September 4) via the lone qualifying session. Round 19 will take place one day later, followed by Rounds 20 and 21 on Sunday (September 6).

Supporters, fans and media can keep abreast of Newgarden’s rookie season of European racing via the newly designed and developed website www.raceroftomorrow.com

For direct contact, please email Josef Newgarden at raceroftomorrow@gmail.com Those interested in networking with Newgarden via Racer of Tomorrow Ltd, please contact Rick Gorne via representation@gomansport.com

American Josef Newgarden has established himself as one of the leading up-and-coming drivers in junior formula car racing. A former race and championship-winning driver in the karting ranks, the Tennessee native has continued his winning ways behind the wheel of a race car. In 2008, Newgarden won three times and started from the pole position a series-high six times in the BFGoodrich/Skip Barber National presented by Mazda series, en route to narrowly finishing second in the championship fight. Newgarden made history a few months later, becoming the first American to win the historic Formula Ford Festival in England, when he took home top honors in the Kent class as a member of the prestigious Team USA Scholarship program. In 2009, Newgarden competes full-time in Europe as driver for Joe Tandy Racing in the 25-race MSA Formula Ford Championship of Great Britain Formula Ford Championship. Newgarden is sponsored by Racer of Tomorrow Ltd and Newgy/Donic Robo-Pong ping pong robots.