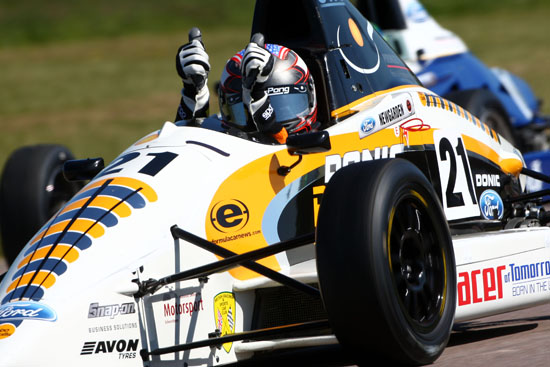 The battle for the lead of the MSA Formula Ford Championship of Great Britain came alive at Donington Park this weekend, Josef Newgarden closing to within 17 points of season-long series leader James Cole, with Newgarden, Chrissy Palmer and Daniel Erickson sharing the Donington victory spoils.

There were celebrations also for reigning Formula Ford Champion Wayne Boyd, who underlined the promise he displayed so often last season with a masterly victory at Donington in round 12 of the Cooper Tires British F3 International Series. It was his maiden Formula 3 win.

Having annexed the pole by a quarter of a second, 21-year-old Erickson repelled an early attack from Ben Barker's Van Diemen as they blasted away from the start line, and he pulled into a clear lead by the end of the first lap. His getaway was aided by the absence from the race of the cars which should have started from row two – the Mygale of championship leader James Cole and the Van Diemen of Garry Findlay – which collided on the warm-up lap.

Barker's hopes of keeping in touch with dashing Dan were soon quashed by assaults on his position by Alex Jones's Spectrum and Josef Newgarden's Mygale. Jones made it past Barker on lap three, with Newgarden diving past both of them to snatch second for himself through Redgate Corner next time around.

By the this stage Erickson was two-and-a-half seconds clear and, try as he might, Newgarden couldn't breach the gap by race end, though he did reduce Daniel's advantage to 1.6s. "That was awesome," said Erickson of his first victory. "I didn't get the best of starts but I was able to hold off Barker and then I managed to get a bit of a break and hold on to it."

"I wish I could have gotten the win," said Newgarden. "It was definitely possible but when you get a gap in Formula Ford it's so difficult to close it down. But second is very good for me in the championship, particularly with Findlay and Cole failing to score."

The KMR team's delight at its first win of the season was more than doubled by Jones claiming third – his first podium result – and the other Spectrum, that of Daniel Cammish, taking fourth as well as the Scholarship Class win. "It's been a long time coming," said Jones. "I'm really happy for the team. It's been a fantastic day for Kevin Mills Racing."

Chrissy Palmer battled up from 12th on the grid to fifth by lap five, but could not find a way past Cammish to progress further up the leaderboard. Barker slipped to sixth, finishing well ahead of the battle for seventh, Snetterton victor Jordi Cunill beating Josh Hill to the honors. Kieran Vernon, Fabio Gamberini and Liroy Stuart finished next up, with Jerseyman Dan de Zille 12th – his best result – for the Minister International team. Pat McKenna recovered from a lurid first-lap spin at Goddards to take 13th.

Race 2
Sunday morning's race saw another good start from pole-sitter Erickson, but his hopes of making another getaway were dashed by a two-lap safety car period necessary to remove Liroy Stuart's stricken Mygale from the grid. After the restart Daniel held on in front for a lap before Cole snatched the lead through the Goddards chicane.

Next time around, Erickson, pursued by Newgarden, Findlay and McKenna, charged past Cole, bumping the championship leader down to sixth.

The leading protagonists crossed the line five abreast at the end of lap 11, Newgarden then overhauling Erickson for the lead through McLeans. Josef pulled clear by nine-tenths over the last two laps, posting a new lap record on the penultimate tour.

With McKenna spinning away his hopes of a podium finish, Cole staged a brilliant fight back to third, then snatched second from Erickson near the end. "That was a good race," said James. "I was sixth at one point and I thought that that was it, so second is a great result. I want to win every race, but I can't. You have to take what points you can, when you can."

Newgarden, savoring his fifth win of the season, said: "That was the toughest race of my career, and what a way to come back from a disappointing qualifying… I'm ecstatic, and so happy for the team."

Fluid team-mates Findlay and Barker completed the top five, with Palmer sixth ahead of Jordi Cunill, and Fabio Gamberini an excellent eighth in his Van Diemen to bring to an end Dan Cammish's 13-race Scholarship Class winning streak. Cammish was right behind for ninth, with Alex Jones 10th.

Race 3
Chrissy Palmer drove an absolute peach of a race in the rain-affected 15th round of championship to secure a richly deserved victory – a stunning effort from ninth on the grid which gave the Jamun racer his second win of the 2009 season.

At the start, and with all drivers electing to run on treaded tires due to a rain shower prior to the off, pole-sitter Newgarden got away well to lead on the run to Redgate as Findlay held on to second ahead of McKenna.

Cole made a rapid getaway to pass fourth-placed starter Hill but the best start of all came from Palmer who, from the fifth row, rocketed up the order into third on the first lap. This pushed Cole back to fifth, behind Findlay, who lost some ground after his initial spurt.

Into lap two Newgarden already held a very handy two second advantage over the chasing back which, by the time they reached Redgate, was led by the seemingly unstoppable Palmer, who took the place with a great pass around the outside of McKenna.

The instant he got into second, Palmer began to lap quicker than fellow Mygale runner Newgarden and the American started to come under huge pressure as the laps ticked by. Into the fifth tour, his lead had been cut to just seven tenths of a second and, a lap later, Newgarden headed Palmer by only 0.2s.

At Goddards on lap five the inevitable pass came, Palmer moving ahead of Newgarden for the lead as McKenna continued to hold on to the final podium place ahead of Cole – who took fourth on lap three – Van Diemen runner Findlay, and Hill. The Scholarship Class, meanwhile, was comfortably headed by the Spectrum of Cammish in eighth overall.

Even though Palmer had convincingly moved into the lead early on he simply couldn't shake off Newgarden who, at the end of lap seven, was a mere 0.392 seconds behind and just over a second clear of McKenna.

The Safety Car had to be deployed at the beginning of lap nine following an accident at Hollywood for Luke Williams a lap or so earlier. At that point the order of the top eight was Palmer, Newgarden, McKenna, Findlay, Cole, Hill, Erickson and Cammish.

The restart came on lap 11 with just over two minutes remaining on the clock and Newgarden was fully aware this would probably offer him his best chance of retaking the lead. Diving to the outside of Palmer on the run to Redgate, he was unable to make the attempt count and had to tuck back in behind through Hollywood and down Craner Curves.

Into the final lap of racing, Newgarden again had a look at Palmer going into the first corner and then remained tight to his tail through the Old Hairpin, Schwantz and up to McLeans. At Coppice, the JTR driver looked very well placed to enjoy a great slipstream and although he pulled out to try to pass Palmer on the run to Goddards, the latter held on for an excellent win.

McKenna rounded out the podium with a great drive to third place, keeping Findlay at bay in fourth and Cole in fifth. Erickson finished in sixth place, after passing Hill on the final lap, with Cammish eighth and a clear Scholarship Class winner.

Palmer said: "That was the best race I've done all year. I got an awesome start and by the first corner I was up to fourth I think. It really was a lot of fun, to win like that makes it even more special."

Scholarship Class victor Cammish commented: "That was a hard race, it's the first ever wet race I've had in cars so that was certainly an experience. It's obviously great to win the class, I'm pleased with how things went."