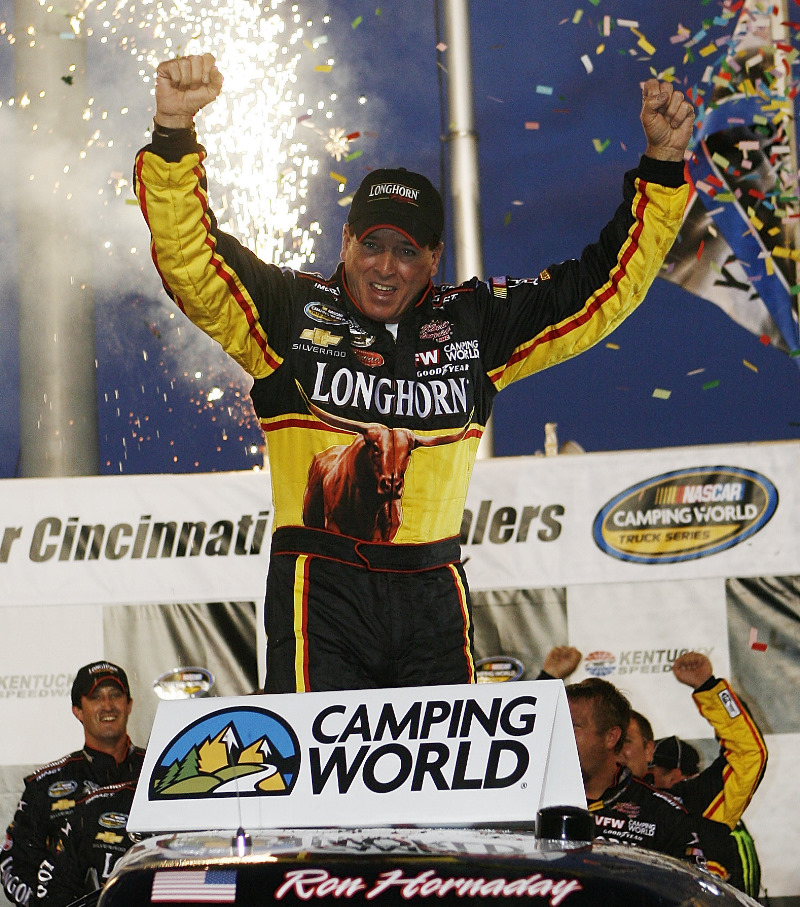 Ron Hornaday Jr. rallied in the final 24 laps Saturday for his third straight victory in the Camping World Truck Series, beating Mike Skinner by a truck length in the Built Ford Tough 225 at Kentucky Speedway.

“On Lap 45, if you had told me we’d win this race, I’d have told you were lying," Hornaday said. “We brought the truck back to where we could run (Turns) 3 and 4 wide open. We definitely had to pass some trucks."

Hornaday was sixth for the Lap 127 restart in the 150-lap race on the 1.5-mile track. Crew chief Rick Ren made chassis and air pressure adjustments to the tires on the final two stops to give Hornaday a faster truck.

Hornaday used his tremendous ability on restarts to jump up to third before another caution came out four laps later. On the ensuing restart, he passed rookie Tayler Malsam on the inside of Turn 2 and Aric Almirola on the inside in Turn 4 to take the lead with 18 laps remaining.

Skinner passed Randy Moss Motorsports teammate Malsam for third with nine laps left and inherited second when Todd Bodine had a mechanical problem under the last caution. Skinner closed on Hornaday going into the final two turns but wasn’t able to pass him on the outside.

“I kept my head on the restarts, and we took about a fifth-place truck and finished second," Skinner said. “I really thought I could pass (Hornaday) on the outside on the final lap."

Matt Crafton was third, followed by Timothy Peters and Almirola.

The victory was Hornaday’s fourth of the season and boosted him into a 96-point lead over runner-up Crafton.

Hornaday seems likely to lose some of that lead in the coming week. NASCAR confiscated a rear housing during initial technical inspection Friday and will take it to its Research and Development Center. There also could be other penalties.

“We buy it from a manufacturer in good faith," Ren said. “The housing was not built to order. We measure it, but not the part that is illegal per the rulebook. We brought it to the racetrack, we’re responsible and we’ll be penalized. It slipped through so many cracks. We’re talking about a quarter of an inch, and the discrepancy didn’t make any difference as far as performance.

“It’s in black and white in the rulebook, but it was built wrong. I don’t want people to think we’re cheating."