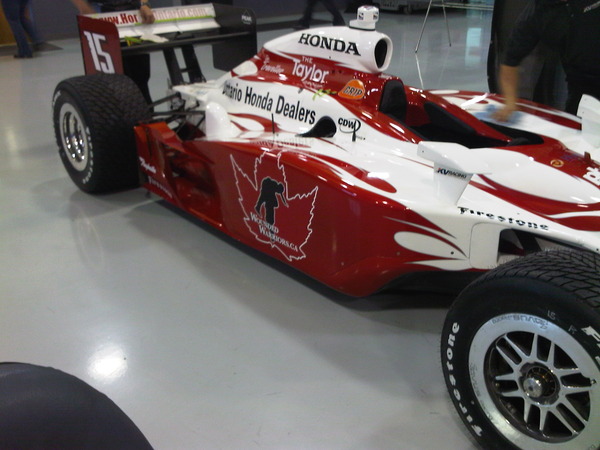 Here is a photo of Paul Tracy's car in his new livery for this weekend's Honda GP of Toronto Indy Car race.

06/23/09 Canadian Paul Tracy’s KV Racing Technology car will be sponsored by the Ontario Honda Dealers Association, and will support Wounded Warriors.ca., at the Honda Indy Toronto, July 12 on the streets of Toronto, Ontario, Canada

Tracy, the 2003 Champ Car World Series champion, is one of the most successful and exciting drivers in the history of open-wheel racing. The native of Scarborough, Ontario, Canada, will pilot the #15 Ontario Honda Dealers – Wounded Warriors.ca – KV Racing Technology Honda/Dallara/Firestone machine.

“We are extremely pleased that Paul Tracy will pilot a KV Racing Technology entry with sponsorship from the Ontario Honda Dealers Association in support of Wounded Warriors.ca," said KVRT co-owner Jimmy Vasser. “Having Paul drive in front of his countrymen with an organization like Wounded Warriors.ca on the sidepods of a KVRT car is an honor and a privilege. I personally want to thank the Ontario Honda Dealers Association for making this possible."

Brian Tafler of the Ontario Honda Dealers Association said, "To have the Indy return to Toronto, sponsored by Honda, and not have Paul Tracy racing didn’t make sense to us. So we decided to sponsor Paul. When someone brought up the idea of supporting our Canadian troops, the decision to do that was both immediate and unanimous. We have young men and women in harm's way in foreign lands. Not all come back unscathed. We wanted to help those in need of numerous forms of assistance. That’s why we decided to join with Wounded Warriors.ca to help bring awareness to their cause and to help raise funds for them during the Honda Indy Toronto race weekend."

Commenting on the support Captain George W. Johnston, president and founder of Wounded Warriors.ca., said, "As a soldier and the father of a soldier I think I can speak for all military members and their families when I say thank you from the bottom of my heart. We see the support for the troops every day and what the Ontario Honda Dealers have done here today, has made them corporate heroes,"

Tracy, whose talent and determination have made him a fan favorite, will be contesting his 17th race in Toronto. In 16 previous starts on the streets of Toronto he has finished in the top-10 a total of 11 times with eight top-five showings, five podium performances, two wins (1993 and 2003) and one pole.

“I want to thank the Ontario Honda Dealers Association, Kevin Kalkhoven and Jimmy Vasser for the opportunity to race in front of my hometown fans," Tracy said. “I am especially thankful because it is a tremendous honor to represent Wounded Warriors.ca. I am proud to be able to support and raise awareness for this organization that assists Canadian armed forces personnel."

The Toronto race will be Tracy’s fourth IndyCar start. In May he competed for KVRT at the Indy 500 finishing ninth. His other IndyCar events were the 2002 Indy 500, where he placed second, and the 2008 Edmonton race, placed fourth. Tracy will also compete in the Camping World Grand Prix at the Glen, July 5, at Watkins Glen International in Watkins Glen, New York in a tune-up prior to the Honda Indy Toronto race and then Rexall Edmonton Indy on July 26.

Now in his 19th season, Tracy has crafted a career that has established him as one of the top drivers ever to step into the cockpit of an open-wheel car. The resident of Las Vegas, Nevada is among the top-10 in almost every Champ Car career statistical category including wins, 31 (tied for seventh all-time), poles, 25 (ninth all-time), and laps led, 4,238 (sixth all-time). He has 75 career podium performances, 102 top-five finishes and 142 top-10 showings in 265 starts (262 in Champ Car, tied for eighth all-time and three in IndyCar). In the 15 seasons in which Tracy has competed in over 80% of the races, he has finished in the top-10 in the championship standings 10 times including eight times in the top-five, four in the top-three and captured the championship in 2003.