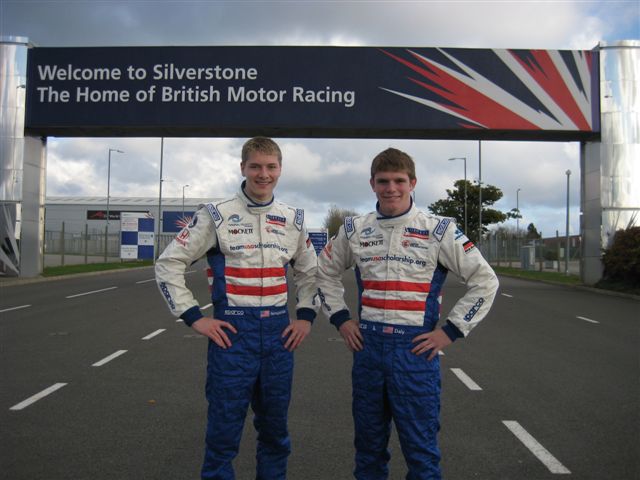 Team USA Scholarship drivers Josef Newgarden and Conor Daly are widely tipped to be among the front-runners for this weekend’s Walter Hayes Trophy event at Silverstone after their stellar performance in the recent Formula Ford Kent Festival at Brands Hatch.

Both drivers were lauded in the British specialist press after their impressive UK debut, but they will face even tougher opposition at Silverstone with the addition of several well-established names on the entry list for the event which honors one of the originators of Formula Ford.

Newgarden and Daly have been testing at Silverstone for the past two days. Their sessions have been far from trouble-free, with Daly encountering persistent engine problems as well as some handling difficulties, and Newgarden losing time today after he fluffed a gear change and over-revved the engine. Nevertheless, both of the Cliff Dempsey Racing-prepped Ray GR07/08 cars have been fast, and the drivers are excited about their prospects for the weekend.

“Yesterday’s testing was really good," declared Newgarden. “We ran in all sorts of different conditions and we made a lot of progress with the setup. The car is well balanced, and when we add new tires tomorrow it’s going to be really good because it’s good as it is right now and new tires will only help it."

Newgarden’s engine, which sustained four bent valves and a broken cam follower, was dispatched to engine builder Neil Bold’s workshop in Manchester this morning and was due to be returned this evening after a thorough rebuild.

Both drivers are relishing the opportunity to compete at Silverstone – “The Home of British Motor Racing" – and even though his two days of testing have been fraught with drama, Daly, too, is looking forward to the weekend.

“I’ve run all the sessions and we’ve been fairly fast but we’ve definitely still some work to do," said Daly. “We changed the carburetor, which definitely helped, but we’re still losing a couple of tenths [of a second] on the [main] straight. We need to get the handling a little closer too, because I have quite a bit of understeer from the middle of the corner to the exit. It’s been a bit of a struggle but I think Cliff’s got a handle on what’s going on. If it’s dry in the morning [for qualifying], I think we could be good handling-wise. Hopefully we can get the engine sorted too…."

Qualifying for the Walter Hayes Trophy will take place tomorrow (Saturday) morning, followed by the first of six eight-lap heat races starting at 11:45. Daly has been drawn into Heat One, while Newgarden will be in Heat Three. The top 11 finishers from each race will progress through to a pair of 12-lap Semi-Final races on Sunday morning. The 15-lap final will comprise the top 36 cars on Sunday afternoon.