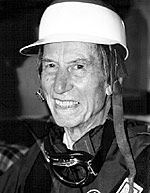 John Fitch automobile safety advocate, 1950's auto racing star World War II Aviator and POW Camp survivor is being hounded to bankruptcy by the state of Connecticut's Department of Environmental Protection for having unknowingly had a pair of 1000 Gallon Heating Oil tanks which developed leaks into the surrounding ground at his historic 241-year old Lime Rock home.

The Ninety year old Fitch, after determining that the tanks leaked, duly dug them up and had them replaced. Upon performing this task, he notified the Connecticut bureaucracy who in turn have thrown the book at him, saddling John with massive costs for alleged hazmat mitigation! This comes on top of JohnÂ¹s burden of arranging for nursing home care for his dear and devoted wife.

Personally, I recognize that "hazardous materials," are bad! But I have to wonder about a state that is one of the original 13 colonies applying what have to be draconian modern requirements against property that predates the Constitution of the United States!

I was born and raised in Connecticut and as a youngster watched John Fitch race at Thompson Speedway and Watkins Glen (NY). I also attended the first races at Lime Rock Park, a circuit that John Fitch founded, designed and operated in 1957. I hitchhiked from Litchfield to Lime Rock for those races. (Not something I'd recommend today).

Leaving aside the historic significance of the Fitch home and the Fitch family name, there are the contributions and sacrifices made by John Fitch personally. As a World War II aviator, John Fitch successfully flew numerous combat missions over enemy territory. He is credited with being one of the first American to shoot down a Messerschmitt ME 262 Jet Fighter before being shot down and interred in a German Prisoner Of War camp. Upon his return to freedom, Fitch raced sports cars successfully starting with the iconic MG TC in 1948.

In 1951, John Fitch became the SCCA's first Road Racing Champion. He also became a part of the racing team fielded by Connecticut's Briggs S. Cunningham in his (Cunningham's) attempts to field an American built Sports Car to race in international competition including the 24 Hours of Le Mans. Fitch went on to set a string of records in the early Chevrolet Corvettes.

John Fitch also invented those sand filled yellow protection devices called Fitch Inertial Safety Barriers, that you find along the highways to soften the blows from crashing into bridge abutments and highway off ramps.

To learn more about John Fitch and his accomplishments visit his web site: http://www.racesafety.com/

To learn more about the Fitch Family name and its significance to American History, of which the current John Fitch has contributed greatly, I recommend "The Life of John Fitch The Inventor of the Steamboat" by Thompson Westcott (1875) at: http://www.history.rochester.edu/steam/westcott/

Visit SpeedStyle Magazine at http://www.speedstylemagazine.com for even more information affecting a true hero and patriot!