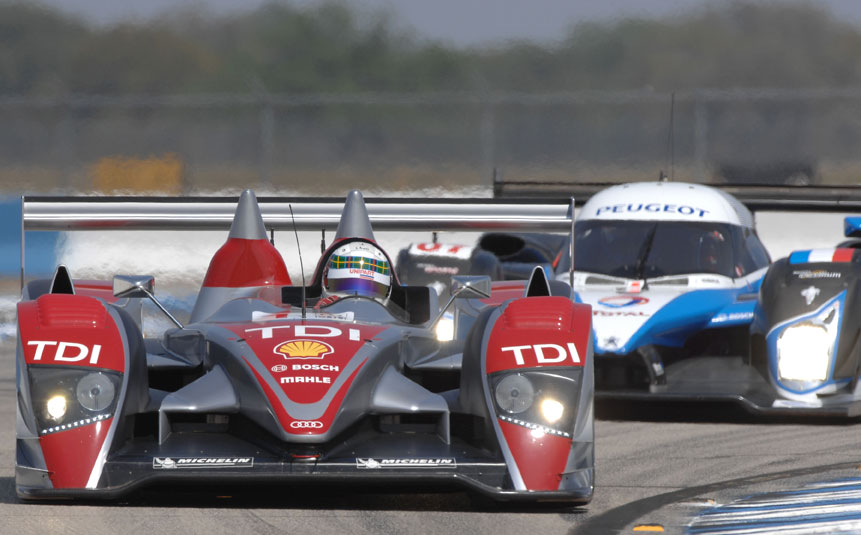 The Audi R10 TDI remains unbeaten after 22 races. In a turbulent 12-hour race at Sebring (US state of Florida), Audi achieved a 1-2 victory in the LM P1 category with their diesel-powered sports cars. Following eight Sebring victories in a row, however, Audi had to be content with class glory in the American endurance classic for the first time. In the overall classification, the two R10 TDI prototypes finished third and sixth.

At the mid-point in the race, the two Audi R10 TDI cars were running in front of the field. Lucas Luhr, Mike Rockenfeller and Marco Werner had a 40-second lead over their team mates Dindo Capello, Allan McNish and Tom Kristensen, when the right turbo charger and the front brake discs had to be changed on their R10 TDI. This cost them 16 laps and any chance to fight for victory. An off track excursion at dusk plus two stop-and-go penalties further delayed them.

The number 1 "sister car", which had started from pole position, lost 30 seconds due to a stop-and-go penalty in the opening stages of the heated battle. At the start of the eighth hour, the push-rod of the right front suspension had to be fixed while less than an hour later, the front brake discs had to be replaced.

Almost four laps down, Dindo Capello, Tom Kristensen and Allan McNish impressively fought their way back to the front, making it back onto the lead lap and eventually finishing third overall. They missed the outright victory by just 67 seconds – after losing almost ten minutes in the pits.