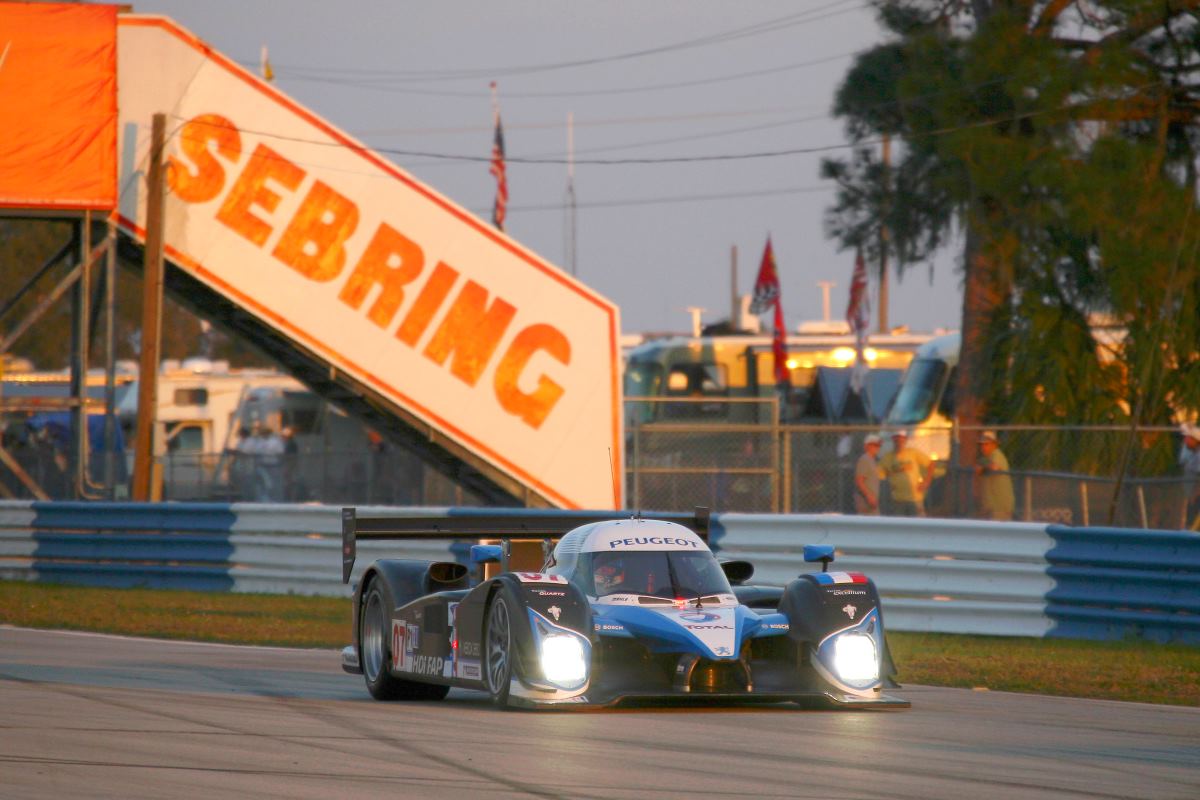 When the decision was taken to enter a single 908 HDi FAP for the 2008 12 Hours of Sebring, Team Peugeot Total was clear about its objective which was to prepare for this year's priority, the Le Mans 24 Hours. The race enabled it to accomplish that mission and the overall result was finally positive for the team which saw the 908 overcome technical problems to finish the race after spending more than two hours in front and with the fastest race lap under its belt.

Despite the frustration of not being able to start from pole position after the results of the qualifying session were scrubbed, Nicolas Minassian started the race for Peugeot intent on being first into the opening corner.

Watched closely by the entire Team Peugeot Total squad, he achieved his goal and the car went on to pull out an assertive lead as Portugal's Pedro Lamy and fellow Frenchman Stéphane Sarrazin took over at the wheel of the 908 HDi FAP. Its lead was practically 35 seconds after the first two hours of racing. However, 52 minutes later, a hydraulic leak forced Stéphane Sarrazin to make a lengthy pit stop. Despite losing nine laps, the Frenchman rejoined the race and soon came out on top of his ensuing duel with Allan McNish before having to make another stop, this time for 45 minutes, again because of a hydraulic problem.

The incident saw the 908 HDi FAP drop to 22nd place, 25 laps behind the leader, but the three drivers and the team's engineers then worked closely together to put in a string of fastest race laps which culminated in Pedro Lamy bagging the best time of the day with a 1m 44.536s (an average of more than 207kph) after eight hours of racing. This impressive run was interrupted two hours before the checkered flag when the rear left wheel-bearing had to be changed, and then by another stop to repair a leak in the air intake system. Determined not to give up despite these difficult conditions, the team continued to give its all and Pedro Lamy eventually crossed the line in 12th place.

Michel BARGE: "The purpose of this race was to see how the car performed over such a long distance and to work on the reliability of certain technical solutions. At the end of the 12 hours, the global result was positive. We posted some excellent, consistent lap times and put the pressure on our main rivals, but we do not lose sight of the fact that we still have a great deal of work to do. Last but not least, the heat made it a first class practice run for the team."

Bruno FAMIN: "The race went pretty much as expected. We wanted to show the car's potential and validate certain parts and I think it would have taken a great deal of luck to have made it all the way to the flag without any problems! The 318 laps we completed taught us a great deal, including the performance and consistency of our 2008 Michelin tires. We lost ground to begin with when we had to stop to repair a hydraulic leak and then when we had to fit a new rear left wheel-bearing before a leak in the air intake system resulted in a fall in power. None of these problems are particularly alarming."

Stéphane SARRAZIN: "Like all drivers, I like to win and I am obviously a little disappointed because the car was fantastic. I enjoyed the race, especially my scrap with Allan McNish. I really wanted to come out of that on top to show that we were the quickest!"

Nicolas MINASSIAN: "It was important to lead into the first corner. The team deserved it, and I pushed as hard as I could each time I was at the wheel."

Pedro LAMY: "The car was really fast. Despite our misfortunes, I am confident for the rest of the season which has only just started. I am looking forward to Barcelona!"