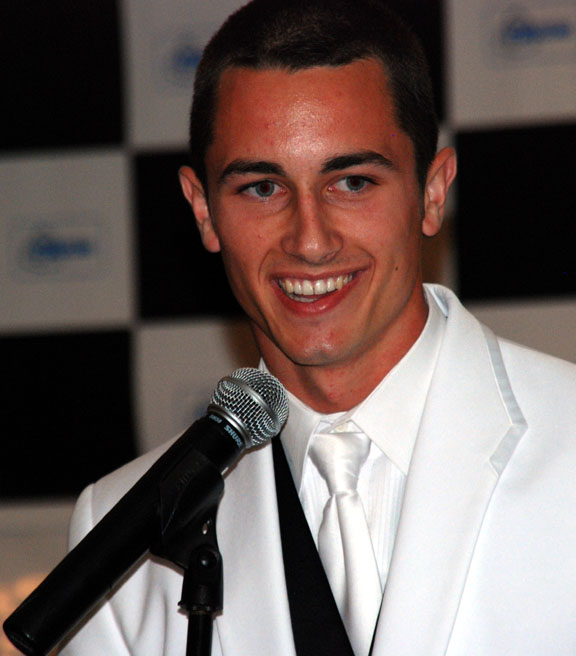 Rising open-wheel racing racer Dane Cameron has picked up a pair of prestigious awards to add to his already crowded trophy case. The Sonoma, California native, who won the 2007 Star Mazda Championship and will race in the 2008 Champ Car Atlantic Championship courtesy of a full-season sponsorship from the MAZDASPEED Motorsports Development Ladder, has been awarded both the 15th annual Gorsline Scholarship and selected as the 45th annual Open Wheel Road Racer of the Year by the Motor Sport Press Association.

The Gorsline Human Performance Institute Scholarship is presented at the annual AARWBA Auto Racing All America Banquet by The Gorsline Company, which specializes in providing insurance and financial planning for high-risk professionals such as racing drivers. The award was created to improve the sport by promoting talented, rising young stars by supporting them in their quest to reach their driving pinnacle. The award recognizes and rewards performance and potential. Previous winners of the Gorsline Scholarship include Indy 500 winner Buddy Rice, Danica Patrick, Katherine Legge, Colin Braun, Patrick Long, Bryan Herta and Butch Leitzinger.

As part of the Gorsline Scholarship, Cameron will be working with Dr. Jacques Dallaire, Cofounder of the Human Performance Institute, with an individually designed Performance Enhancement Program. Dallaire, Director of Performance Prime, has personally worked with more than 600 drivers in 35 countries from all forms of motorsports.

“Winning the Gorsline Scholarship is a big deal for a driver and I’m proud to be in such elite company," says Cameron. “In addition to working with Dr. Dallaire, who has been so instrumental in the careers of so many top drivers, I’ve had the opportunity to attend several major Motorsports functions with John Gorsline and he’s introduced me to some of the top people in auto racing worldwide. In racing, who you know is almost as important as how fast you go, and the Gorsline Scholarship is helping me take a huge step forward in both."

Cameron’s second award, Open Wheel Road Racer of the Year, comes from a group close to home but with a thorough knowledge of the wide world of motorsports. Begun in 1963, the award is presented by the Motor Sports Press Association, an organization comprised of professional motorsports and automotive journalists and photographers located in Northern California and throughout North America. Through newspapers, radio, television, magazines, specialty publications, and photography, members reach an audience of more than 55 million.

Cameron will receive the MSPA Open Wheel Racer of the Year Award at the organization’s annual banquet on March 5. In addition to his award, Peggy Haas and Jackie Doty, the two women who created the legendary Lynx Racing racing team and driver development program of which Cameron is a part, will be inducted into the MSPA Hall of Fame. Other Lynx drivers over the years include Patrick Carpentier, Memo Gidley, Alex Barron, Buddy Rice, Michael Valiante and Bryan Sellers.

“The MSPA award is very special to me because it’s a group that includes a lot of the media people who took an interest in me back when I was just starting to race karts," says Cameron. “The stories they did about me helped me get where I am today by keeping my name out there in front of teams, sponsors and other people who have had a big influence on my career. And I’m really happy to be sharing the award podium with Peggy and Jackie; Lynx Racing is one of the most unique and successful teams in all of racing and I’m proud to be a part of it."

In between award presentations and ‘working the room’ at auto racing trade shows Cameron continues the process of settling in with his new Champ Car Atlantic team, Sierra Sierra/ProWorks, and getting ready for his Atlantic debut in the Long Beach Grand Prix, April 18-20.

“The Sierra Sierra team has returned intact from last year when they won the championship and that’s a huge advantage for me," says Cameron. “It gives me the luxury of focusing completely on my driving rather than having to deal with team issues. The Atlantic car has a lot more adjustments available than the Star Mazda car I won the championship in last year and we’ve been running through all the variations to see how the car responds. My teammate, Jonathan Bomarito, and I have pretty much been the two fastest guys on track in recent tests, but the upcoming Spring Training at Mazda Raceway Laguna Seca where all the teams will be running will be the real indicator of where we are. Having been part of several championship-winning teams in the past couple of years, I have to say that Sierra Sierra has that special feel about it."

Cameron has won three championships (and finished second in another), as well as winning two Rookie of the Year awards in the past three years. In 2007, he was the series champion and Rookie of the year in the Star Mazda Champion. In 2006, he was the F2000 Rookie of the Year and finished second in the championship. That same year, as a Team USA Scholarship driver, he won the Palmer Audi Winter Championship in Europe. In 2005 Cameron was the SCCA Formula Jim Russell Series champion and Rookie of the Year. His karting career, beginning in 2000, was similarly successful, including the 2003 Jim Russell Karting 80cc Junior Shifter Championship and a 2004 finalist in the Red Bull Driver Search.

Cameron’s climb up the ladder was made possible by a variety of supporters, including Mockett.com, Nearburg Exploration, JDC Motorsports, Lynx Racing, O’Neill Construction, Ocean Tomo, Rett.org, Red Line Oil and Sparco USA. Cameron will also continue to be a member of the Finlay Motorsports Driver Development program as he races for Sierra Sierra in the Atlantic Championship. Rising NASCAR driver Michael McDowell (will drive the #00 Toyota Camry for Michael Waltrip Racing in the 2008 Sprint Cup) is the other member of the highly successful program created by racer/businessman Rob Finlay.