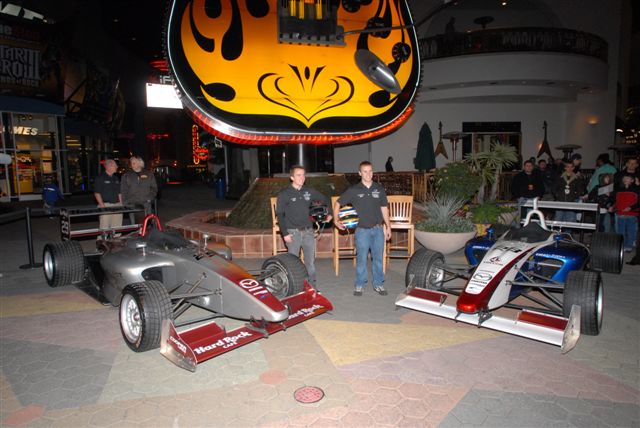 PCM team director Tyler Tadevic made the announcement under the famous Hard Rock guitar at a media event at the Hard Rock Cafe at Universal Studios tonight in Hollywood. Attended by a large contingent of entertainment and sports media, Tadevic commented on the team’s desire to return to their racing roots, “We’re really proud to be returning to the series where we won the 2004 championship, and we are looking forward to continuing our winning tradition. As a graduate of the series, Alex is a believer of the product; this is an important program to him. Shane has a history of running championship winning teams and we saw this as a terrific opportunity to return to Atlantic competition." Tadevic continued, “We feel we’ve got two exceptional young drivers on board. They’re both quick and very professional, we’ve got an exciting season ahead of us."

Carl Skerlong, 19 of Mukilteo, Washington will drive the #28 King Taco/Mazda/Swift. Skerlong made an impressive debut in the Atlantic series in 2007 with two podium finishes and a top-ten finish in the series championship. Skerlong will be paired with two-time Atlantic championship winning (2003, 2004) race engineer Burke Harrison, “I am so excited about this opportunity. I am really happy to be able to continue my relationship with Shane, but grateful for the tools and resources racing for Pacific Coast Motorsports will offer. I have one goal this year, and that is to win the Atlantic series title and the $2 million prize in the #28 King Taco car."

Frankie Muniz, 22 of Los Angeles will drive the #29 PCM/Mazda/Swift in his sophomore season of Atlantic competition. Most people will recognize Frankie as an Emmy and Golden Globe nominated actor, but 2008 will mark his third season as a professional racecar driver. “Joining PCM is a huge step forward for me in my racing career," said Muniz. “In the three tests I have already completed, I have learned so much and really developed my skills as a racing driver. Tim Lewis, my race engineer has a championship winning record behind him and we have gelled really well. I just can’t wait for the season to start in April at the Long Beach Grand Prix and I am thrilled to represent a professional racing team like Pacific Coast Motorsports."