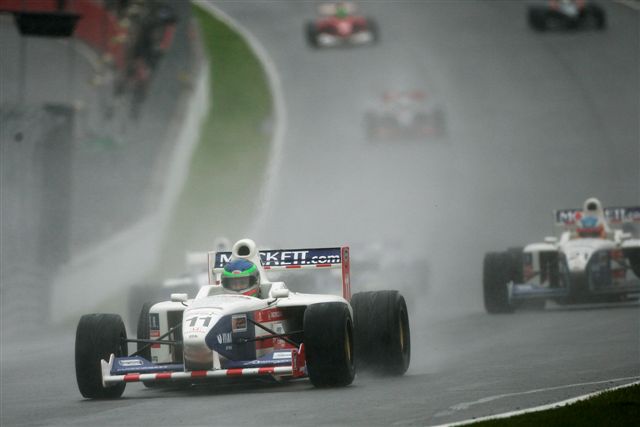 Their ultimate results were disappointing but Barrett, in particular, showed impressive pace, especially in Race One when he ran similar lap times to the leaders after spinning out of sixth place following contact with another car. His race finished in the gravel trap at Druid’s hairpin on the final lap – while he was attempting to regain fastest lap of the race from Jonathan Legris – but he still came away encouraged.

“It was fun, very enjoyable," said Barrett. “Any time there’s rain, I’m happy. I got by [Alex] Brundle [for sixth place, after starting ninth] on the front straightaway, using the power-boost, but then he tried to repass me going into the hairpin, and his left-front wheel hit my right rear and I went off into the gravel."

Barrett lost a couple of laps before his car could be restarted. Miller, meanwhile, ran 10th before making a mistake at Paddock Hill Bend and crashing out of the race on lap 8.

“My fault," he admitted. “I was on the boost, trying to make a pass, and I got in a bit too deep, locked up, and once I got on the paint [at the edge of the race track], I was history."

Race Two was similarly disappointing. Barrett made a great start to run among the top five before missing a down-shift on the approach to the challenging Paddock Hill Bend and plunging into the gravel trap.

“I couldn’t engage fourth gear," he related. “By the time it went in, I was going too fast, couldn’t match up the revs and just went into the kitty litter. Really disappointing."

Miller was troubled by a front-end vibration after his car had been hastily repaired following his earlier “off" although at least he steered clear of trouble en route to a 12th-place finish.

“Right away from the start I had a pretty good vibration, and under braking it just intensified," said Miller.

Race Three was red-flagged after two cars spun off on Lap 3. Barrett again made a strong getaway at the restart, and was up into fifth place by the fourth lap, with Miller in ninth. Barrett then made a mistake on the exit of Clearways and was fortunate not to make contact with anything solid.

After rejoining in 12th, Barrett quickly moved back inside the top 10, turning a series of competitive laps as he closed rapidly onto the tail of Miller in a battle for eighth.

“I finished – that was the important thing," said Barrett. “It was a bit frustrating behind Joel, but he drove a good race and didn’t make any mistakes. I got a top 10 so I’m happy, and I’m much better prepared now going into [the final weekend of racing at ] Snetterton."

Miller held off his faster compatriot as he notched the team’s best finish of the weekend.

“I just kept plugging away at it," said Miller. “I’ve only ever done one wet race before – in a Skip Barber car at Laguna Seca – so it was tough out there. I had a lot to learn. I’m looking forward to next weekend with a lot of lessons learned – note the plural!"