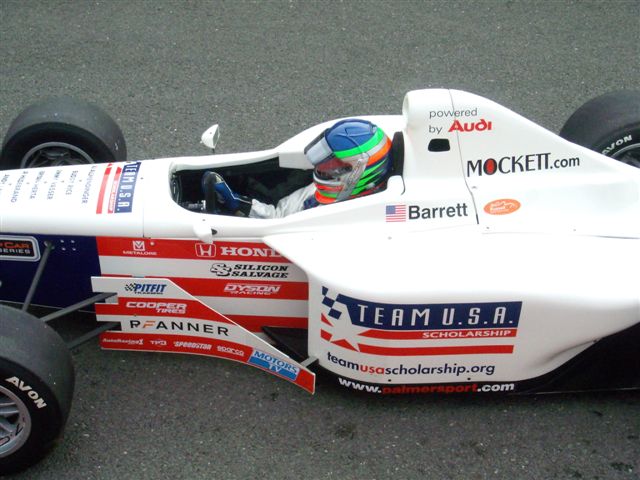 Dartford, England – A quality field has been attracted to this year’s Formula Palmer Audi Autumn Trophy, and young Americans Patrick Barrett and Joel Miller certainly raised a few eyebrows by qualifying consistently among the top 10 for the trio of races that will take place tomorrow on the famed Brands Hatch “Indy" Circuit.

“I thought the boys did an extremely good job," said FPA founder and ex-Formula 1 driver Jonathan Palmer. “Brands is a tough little track, especially in these cars, which are not easy to drive fast, so to be knocking on the doors of the guys who have been racing here for a few years was a very good effort."

Barrett and Miller contented themselves by running just a bare minimum of laps during a practice session held first thing this morning, intent upon making sure they looked after their one and only set of fresh Avon tires which will have to last throughout the weekend. The meat of the day then included three separate 30-minute qualifying sessions to set the grid positions for Sunday’s 28-lap races.

In Qualifying 1, Barrett set the ninth fastest time at 45.186 seconds. Miller was 12th on 45.434. Experienced Formula Renault racers Will Bratt and Richard Keen claimed the top two grid positions at 44.422 and 44.457, respectively.

“I was able to get some good rest last night and get myself properly prepared for today," said Barrett, 18, from Los Osos, Calif. “I had some time to think about everything – where to improve, what to do and what not to do. I felt much more comfortable [than yesterday] and I think I saw a major improvement, especially in Q2.

“Q3 saw a lot of consistency, but I wasn’t able to pull out a really fast lap," he continued. “That was a bit frustrating, but overall it was a great learning experience and I’m really looking forward to the races tomorrow."

Teammate Miller was equally upbeat: “All in all, we’re in the top 10 so today was a good day. You’re never happy with that but we definitely took a good step forward. We were much closer to the front-running pace than yesterday, so that feels good. The data shows that I’m pretty close [to the pace] on the second half of the lap. I sat down with the data guys and they said if the race went from Druid’s [hairpin] to the start/finish line, I’d be in good shape. Each time out is a learning experience. We’re getting better and making progress. My first goal for tomorrow is finish all the races; goal number two is to finish in the top five."