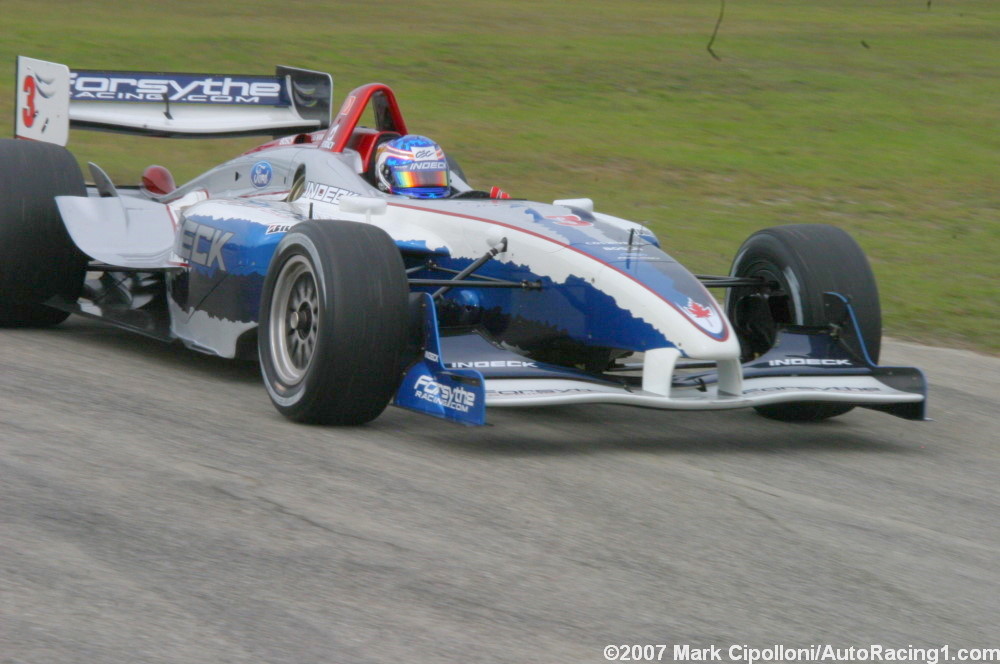 Sebring, Florida – Forsythe Championship Racing and Paul Tracy officially began their hunt for the 2007 Champ Car World Series Championship today by taking part in the first of three days of official testing at Sebring International Raceway. It was a historic day for the Champ Car World Series as the teams came together for the competitive debut of the brand new Panoz DP01 chassis, designed from the ground up to provide close racing with special aerodynamics intended to reduce downforce disruptions for cars running close together.

For the Forsythe Team the new chassis is not the only change since last year. Today the team showed off its new colors; a slick blue, white, red and silver livery laid out in premium quality Sherwin-Williams paint that is certain to capture the eye of race attendees and TV viewers around the world.

The 2006 season proved to be a difficult one for Tracy and the Forsythe Team, but both have worked harder than ever over the winter preparing for this year’s attack. Tracy has spent his entire off-season training and preparing himself for the 2007 Season, continuing with his strict physical training routine and keeping his driving skills sharp by testing Daytona Prototype cars. Although today was the first time that the Forsythe #3 hit the track this year, the Forsythe Team engineers have already been working on the development on the car for months – a crucial factor due to the limited amount of testing permitted during the pre-season. Tracy and the Forsythe Team have begun the 2007 season with only one goal in mind, to win the 2007 Vanderbilt Cup.

Tracy completed 57 trouble-free laps today with his #3 Indeck Panoz setting a fast lap of 51.708 seconds, placing him third on the time charts.

Paul Tracy (#3 INDECK Ford-Cosworth/Bridgestone/Panoz)
Third Fastest
51.708s / 116.199mph
“It’s been a good day, we are able to do a bunch of laps and get a lot of little issues resolved that you always expect with a new car. The car feels great, it feels like a Champ Car but it’s obviously quicker, we were almost as fast as the old car today and we still have a lot of work to do setup-wise. We spent most of the day making sure all the systems were working and started making adjustments towards the end, I also had to get used to the paddle shifters. We still have to learn what the car likes and what it doesn’t, everybody is staying late tonight working on the car and looking at the data trying to understand the car and make it go faster."

Phil LePan, Team Manager
“The test today went fairly well, we had a few minor glitches but you always expect that with a brand new car but all in all it was not bad. We spent most of the day just making sure that all the basic components of the car were working, the cooling systems, the brakes, the steering, etc. During the afternoon session we were able to do some setup work but nothing very dramatic. Tomorrow we’ll keep working at it and keep trying to figure the car out, we have a fairly extensive test plan and we’ll do our best to fit it all in the time we have left."