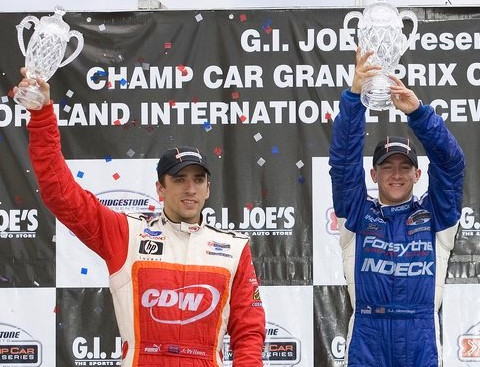 It's no secret that AJ Allmendinger had a great relationship with his former teammate at RuSPORT, Justin Wilson, but he reveals something about how special that relationship was in this interview with AutoRacing1.com President Mark Cipolloni.

"Justin and I had a great relationship, and we still do," said Allmendinger. "We had one as teammates. Now we just have one as friends. (At right Justin Wilson shares the Portland podium earlier this year with race winner AJ Allmendinger. Photo courtesy of Champ Car)

"I think he was genuinely happy for me when I won. I was the same for him in Edmonton. He's an amazing driver. He did a lot for me in my career to really learn from and understand somebody with his wealth of experience, and he never hid anything to try to keep me down.

"What I respect him most about was this – there was no secret about how much I was struggling at times and how frustrated I was. I think any other teammate, a lot of people, would have used that against me because ultimately we're compared to our teammates. That's who you're always compared to. That's the nature of the beast.

"He could have easily just really put the knife in me and turned it and kept turning it until I couldn't take it any more. But he never said a word about it. We could go out and hang out after a race at home, since we live near each other. We'd never say a word about it.

"I don't know many people that would have done that. I don't know if I would have been that good about it. But he was. He more than anything tried to help me instead of trying to use it against me. That's really where my respect comes from and just, you know, a lot of thanks to him for that."