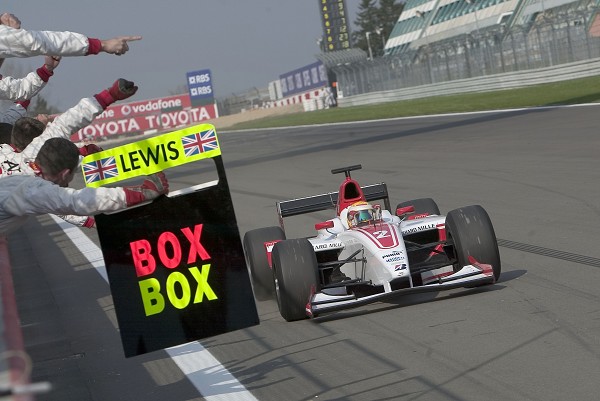 The potential Lewis Hamilton has shown in the first two rounds finally came to the fore in race one at the Nurburgring, where he dominated the field to win by almost twenty seconds. The amiable Briton had the race under his control right from the start, setting the pace throughout and beating teammate Alex Premat and Adam Carroll to the finish despite a taking a drive through penalty for speeding in the pitlane.

The warm up lap ahead of the race start was slightly delayed after four drivers briefly stalled on their getaway, stretching out the grid and leaving front row starters Nelson Piquet Jr and Franck Perera with a long wait before the lights came on.

Both men suffered at the start, bogging down and being swamped by a fast charging Hiroki Yoshimoto and Hamilton as they headed towards turn one. The Japanese driver was first to the corner, but Hamilton dispatched him quickly and never looked like being headed again.

Behind the pair came Jose Maria Lopez, Adam Carroll, Ernesto Viso and Alex Premat, with poleman Piquet next up as Perera's car came to rest by the side of the track, retirement a bitter pill to swallow after a strong job in qualifying.

Next time by Premat and Nicolas Lapierre headed a group of five early stoppers into the pits as Hamilton set the first of a string of fastest laps, with Lopez also finding a way past Yoshimoto and up into second position.

The stops meant that Piquet was up to fifth place but he and Andreas Zuber came in for their stops on lap five, coming out behind the previously stopped French drivers, and the Brazilian was immediately piling the pressure onto Viso, with the South American pair swapping positions for laps without either man establishing himself over the other.

Back at the front Hamilton was running qualifying laps to establish a gap for his stop, which came on lap eleven. With most of the other drivers having stopped he re-entered the track in third, behind Carroll and Xandi Negrao, who were yet to come in.

Negrao was finally in on lap 15, while race-leader Carroll was the final man to make his compulsory stop next time around, and despite losing time on track he was still able to rejoin in seventh.

Hamilton was back in the lead, and all of his early hard work looked to have paid off. Unfortunately he soon learned that he had been handed a drive through penalty, the result of speeding in the pitlane, and the race seemed to be falling away from the Briton.

With the bit between his teeth Hamilton was lapping 1.5 seconds quicker than his teammate, and he circulated twice before coming in on lap 20, rejoining behind new leader Premat but solidly in second place, and the hunt was on.

Premat was unable to push, being unlapped by Timo Glock (who had stalled at the start but was running at a fierce pace after being restarted in the pits), and it looked to be only a matter of time before the teammates were together on track.

Behind them Lopez in third was at the front of a train fighting for the final podium position: Lapierre, Piquet and Carroll were all over his rear wing, but the fight between the trio was the only thing keeping the Argentine from dropping down the order.

And a lap later that very order was changed: Piquet muscled his way past Lapierre at the Veedol chicane, locking up his left front as he did so, with Carroll forcing his car through at the final corner, while on the other side of the circuit Hamilton finally disposed of his teammate and started to tear off into the distance.

The order was now Hamilton, Premat, Lopez, Piquet, Carroll, Lapierre, Viso and Zuber, the latter pair being rapidly caught by Yoshimoto, out for revenge after a poor stop spoilt his early race, and Negrao.

Piquet was clearly in the wars though, and a straight line through Veedol was the most obvious outward sign of his troubles. A large flat spot on his left front tire was beating his car continuously, and Carroll sensed an opportunity

With five laps to go Carroll saw his chance and sailed past Piquet, pulling Lapierre with him at the chicane. And then it was all over for the Brazilian: suspension problems and a delamination meant he was across the gravel and into the wall, and Piquet's day was done.

Once again Lucas di Grassi finished the race early, retiring in the gravel with two laps to go. Zuber's strong showing was also snuffed out when he stopped a lap later after a strong fight with Yoshimoto, the Austrian another victim of delamination after flat-spotting his front right tire.

But out in front Hamilton was untouchable: he stormed to his first GP2 series victory as his team hung over the pitwall in salute, with Premat 19.6 seconds behind in second.

Carroll, who had fought his way up to the tail of Lopez, was the next man through after forcing his way past the now fourth placed Argentine on the final lap, and Lapierre was just 0.2 seconds from following suit.

Viso finished a mostly lonely race in fifth place, with an ecstatic Negrao closing up after having leapfrogged the Zuber / Yoshimoto battle, the latter filling the final points paying position and claiming tomorrow's pole.

But all eyes were on Hamilton, whose innate ability was as clear to see as the beaming smile he wore on the podium as his national anthem was played for what may be the first of many times in 2006.