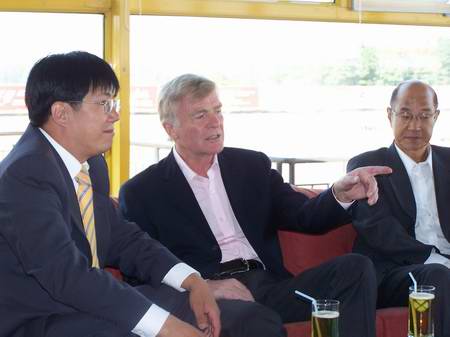 Max Mosley, FIA President, visited Beijing's Goldenport International Circuit on the afternoon of September 23rd. He met with Mr. Shi Tianshu, chairman of FASC and Mr. Ye Mingqing, CEO of Goldenport. Mosley took a tour of the track. Below left, Mr. Ye gives him an introduction of Goldenport’s expansion plans.

No recent word on Champ Car's plans to actually race there after signing a Memorandum of Understanding back in April of this year. As we reported, at issue is who will pay for the upgrades to the track to bring it up to a class 2 facility given there are plans to move the race to the Beijing Olympic site after the 2008 Olympic Games. Champ Car's Memorandum of Understanding (MOU) was with (BSAM) Beijing State-owned Asset Management Company and its Chairman Li Aiqing, not with the track owner Jim Ye Mingqing, who would have to foot the bill for the extensive track upgrades required. Mark C.