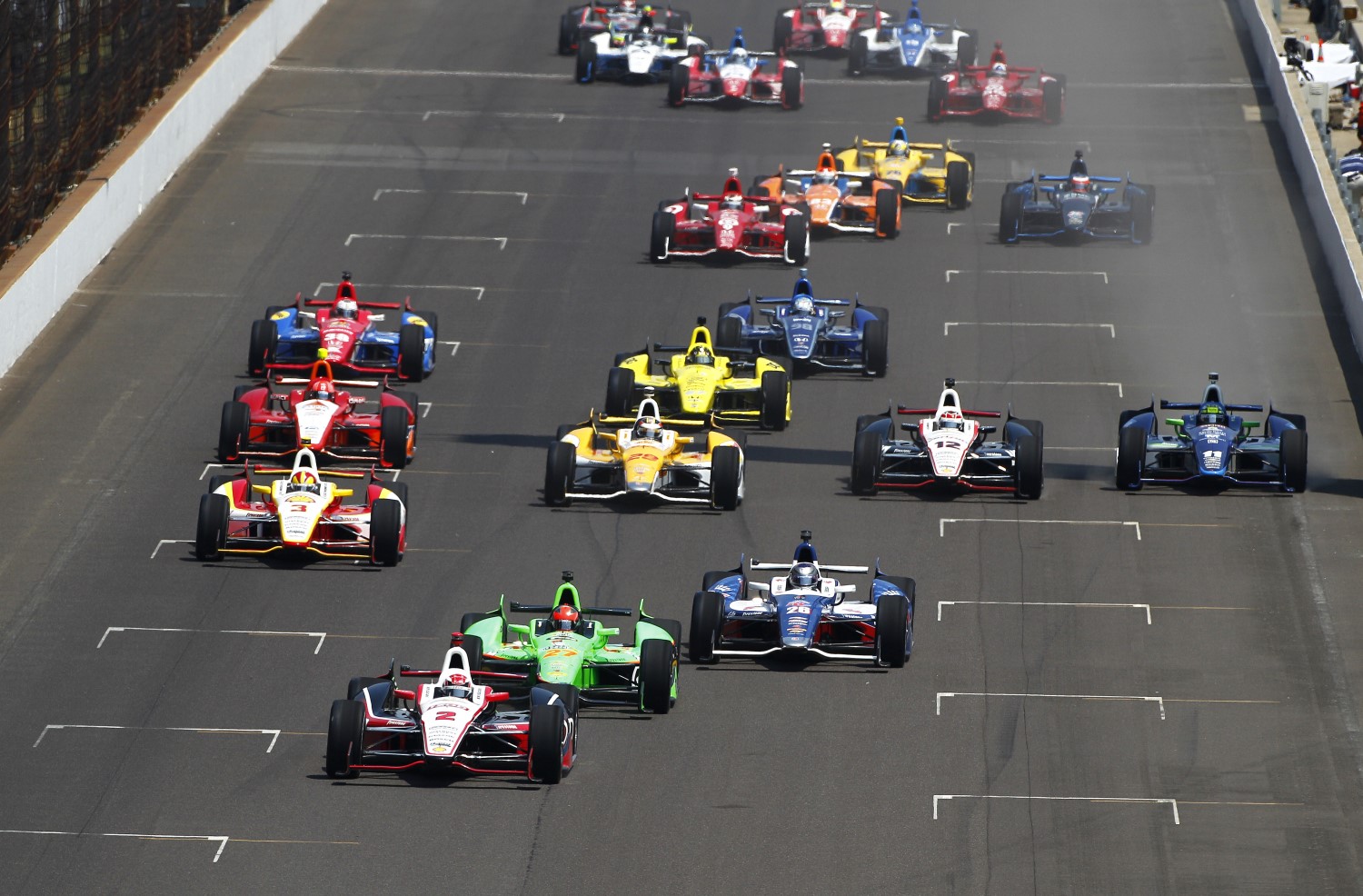 Once upon a time, I may have gotten on board with the tradition thing.

But I'll be honest: glorified taxi-cabs running at the Holy Grail of IndyCar, 33 becoming "just a number," and the great Indianapolis 500 used as a political pawn in a sickening power struggle for control of Indy car racing, sort of soured me on tradition.

Jaded, skeptical, and no longer dreaming about the moonlight on the water, I've moved on to a cold reality. A reality that acknowledges the world of sports entertainment, and IndyCar in particular, are vastly different from what they were twenty, even ten years ago. And while sentiment denouncing the idea of an IndyCar race on the IMS road course based on such tangible matters as tradition, seems to be the majority opinion, the reasoning behind such thinking is rooted in an antiquated reality.

Of course, leading the charge against an IMS road race is SPEED's Robin Miller.

In a column last Monday, Miller offered a host of reasons against an IndyCar race on the IMS road course. Citing the late Speedway savior Tony Hulman's example of the circus, Miller argued that for the 500 to remain "special," IMS should hold only one IndyCar race a year.

But here's the thing: the circus, albeit in different forms, has been coming to town multiple times annually since 1994. Yes, IMS has hosted multiple events since 1994, when the Brickyard 400 debuted. Another glaring omission from Miller's article is the fact Hulman and Company, has secured a $100 million loan from the state of Indiana to upgrade the venerable facility. Yes, you read that correct. IMS, which thrived for generations off one annual event, now has three. And while the finances of Hulman and Co., the parent company of IMS, INDYCAR, IMS Productions, and Clabber Girl Baking Powder are not public, it is very clear, they are seeking to do business in a way they haven't previously. The financial reality indicates as much.

And if Hulman and Co., is changing the way it plans to do business, a few issues that Miller did not address need to be raised. To start, if Hulman and Co., is committed to maximizing the bottom line on events at the Speedway, wouldn't an IndyCar event of some kind make sense. Also, what does said change in business plan mean for IMS' second most prestigious event, the Brickyard 400?

Born in an era of Indy car civil war, the Brickyard 400 enjoyed a smashing debut in 1994. A capacity crowd saw a former open-wheel standout Jeff Gordon capture the inaugural running. The Brickyard would continue to thrive for nearly a decade, padding the IMS war chest in Tony George's quest to rule Indy car racing. Ultimately, of course, George succeeded in bringing Indy car racing under the IMS roof in 2008.

Simultaneously, however the bloom slowly began to fade from the Brickyard rose. Boring racing, sweltering heat, and an economic downturn have combined to make for smaller crowds and suddenly the Brickyard is just another race.

Of course, from a financial perspective, the Speedway does profit from the Brickyard. But at what cost?

Remember, the Brickyard gives NASCAR, a competitor of IndyCar, a platform at the Mecca of Indy car racing. NASCAR enjoys a week of media coverage and exposure leading up to the usually dull race. And since NASCAR isn't drawing 250,000 spectators anymore, why would IMS persist in keeping the Brickyard?

Yes, IMS might make more money by hosting NASCAR for the Brickyard than say an IndyCar road course race. However, such thinking misses the big picture.

While IMS certainly makes money off the NASCAR event, they lose a potential opportunity to invest in, showcase, and promote their own property, the Izod IndyCar Series. Instead, IMS welcomes their sport’s archenemy to their most sacred cathedral.

Instead of Helio Castroneves, Ryan Hunter-Reay and James Hinchcliffe enjoying the fruits of Indianapolis' media coverage, and promotion, Brad Keselowski, Tony Stewart and Jimmie Johnson are the beneficiaries. Instead of paying a bountiful purse to the cash-strapped IndyCar teams, NASCAR teams are the beneficiaries. Instead of Indy Lights and Star Mazda performing of the under card, and gaining the financial and marketing benefits of competing, Grand-Am and Nationwide, get to feast at the Mecca of racing. Instead of providing IndyCar sponsors further opportunities to showcase their products, another opportunity is given to NASCAR sponsors.

And to think, a second IndyCar race is somehow blasphemous?

Unfortunately, ranting about NASCAR's presence at the Speedway may be justified, but it does no good. Further, even if NASCAR were to get the boot from the Mecca of IndyCar, it still doesn't make that clumsy road course layout any better.

Which is why there's no reason for the Indy cars to run it unless they were to modify it to use more on the oval and take the 'Mickey Mouse-ness' out of it. The road course, in its current configuration, can be used as part of an IndyCar championship weekend, but not for the Indy cars.

Here's how it could work. IndyCars would practice and qualify Thursday night. Ideally, this would be televised. On Friday, the junior series would all practice, qualify and race. The hook would be that three championships would be determined in one evening. Afterwards, the facility would then be transferred back to oval configuration for Saturday.

Then would come Saturday night under the new lights the Speedway plans to put in.

With the qualifying order set, the Indy cars would have a warm-up in the late afternoon. At around 7:15 p.m, the green flag would fall on a 160 lap, 400-mile IndyCar finale, paying double points and a very large purse. The bonus points for this event would also be double.

Just think about the potential scenarios. The fact there are double points awarded at the last round, means it is unlikely the championship battle is wrapped up beforehand. A whole host of drivers might be still in contention for the title.

And these are merely the tangible benefits. IndyCar would benefit enormously from all the media attention IndyCar preceding the race. Throw in the chance for one fan to win $1 million if the driver they pick wins the race – that gets more fans engaged. There could be a ceremony following Sunday night in Indianapolis with ABC television crews (note we did not say NBC Sports Network TV crews) still in town, without teams having to travel. With date equity, Labor Day weekend, or another weekend if that works better, would becomes synonymous with (insert sponsor name here) IndyCar Championships at the Brickyard presented by (insert sponsor name here).

Now, there are inevitable questions that arise. For example, what about the NHRA Nationals which run in Indy on Labor Day weekend. Well, the NHRA runs its final round on Monday, so IndyCar being on Saturday night may actually be able to gravy-train off the NHRA. Further, the Saturday evening slot avoids a direct conflict.

Perhaps, more importantly, the question of whether a second oval race somehow tarnishes the Indy 500 must be raised. Well, I would offer that if anything were to taint the 500, it would be a NASCAR race – Taxicabs are not IndyCars. Why are they racing at the Mecca of IndyCar and diluting the prime product? It will be a cold day in hell before the France family allows IndyCars to race at NASCAR's Mecca – Daytona. However, it seems my opinion tends to be the minority in this case.

Nevertheless, I would contend a unique second event on the oval does not undermine the Indy 500. Sure, if the second event was simply another 500-miler that would be a different story, But in this particular case you keep the Indy 500 unique, while creating a whole other unique event; an event, in which IMS can sell corporate sponsorship, profit off the gate, redistribute some of the profits to its teams, all while not having to pay a sanctioning fee; an event in which the IndyCar champion is crowned as the sport's greatest cathedral.

Now, I am well aware, the traditionalists will be out in full-force crying blasphemy. They'll say such an idea undermines the Indy 500, as if running toilets around the Brickyard somehow doesn't. They'll whine about the small crowd, as if 15,000 at Fontana is a better way to end the season.

But removing NASCAR from the Brickyard (and throw in Moto GP while you're at it) makes IMS the Mecca of Indy car racing. Further, Hulman and Co., utilizes its greatest racing asset to create a one-of-a-kind IndyCar championship event; an event that creates a thrilling conclusion to the season every year.

Of course, such an event would certainly have its detractors, and it would not be in line with the Brickyard's many traditions. However, that may in fact be, the best argument for it.

***I'm not a huge believer in luck. However, Will Power seems to have some of the most rotten luck I've ever seen.

***If there is a good explanation for KV Racing Technology running Tony Kanaan out of fuel when he had a chance to win in his hometown race, please pass it along.

***Despite the amazing finish in Sao Paolo, I fear IndyCar set a dangerous precedent not penalizing Takuma Sato, who clearly blocked not once, not twice, but three times in the closing laps.

***Speaking of Sao Paulo, the crowd looked quite robust, at least on television. Recall our article, from this past February regarding IndyCar racing overseas, particularly the part about expanding in South America.