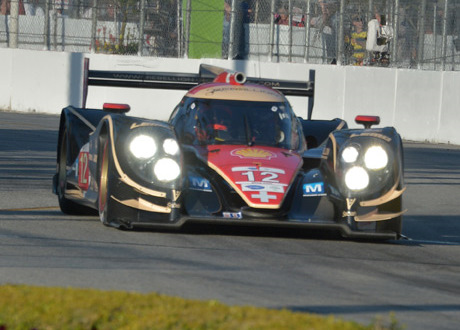 Neel Jani’s return to the Long Beach street circuit is off to a good start. In his first race at the circuit since 2007, Jani won pole position for the Tequila PatrÂ¢n American Le Mans Series at Long Beach with a lap of 1:12.600 (97.587 mph) in Rebellion Racing’s No. 12 Lola-Toyota coupe.

Saturday’s second round of the American Le Mans Series presented by Tequila PatrÂ¢n is set for 7:30 p.m. ET.

Jani previously raced at Long Beach in the 2007 Champ Car event, but didn’t believe that earlier experience provided much benefit. He was 0.682 seconds better Friday than Dyson Racing’s Guy Smith in the No. 16 Dyson Racing Lola-Mazda. Lucas Luhr qualified third for Muscle Milk Pickett Racing with a 114.004 (95.735 mph) in the No. 6 Honda Performance Development ARX-03a.

“It didn’t help having driven here before in Champ Car. Visibility is a lot better in a single-seater than our closed car," Jani said. “With our big wheel arches we have to guess where the walls are. So there are a lot of tricky factors for us on a street course."

Jani and Nick Heidfeld enter the weekend with the lead in the P1 championship following the season-opening Mobil 1 Twelve Hours of Sebring Fueled by Fresh from Florida. The team has not competed on a street circuit like Long Beach before this weekend.

“We didn’t expect it to be such a big gap (from first to second place)," Jani said. “This is the first time we are bringing this car to a street course, and the car is developed for Le Mans. We had no idea how to do the setup."

P2
Ryan Briscoe won his second straight pole position at Long Beach – he was the fastest qualifier in last year’s IndyCar race – but first in the ALMS. He turned a lap of 1:16.014 (93.204 mph) in Level 5 Motorsports’ No. 551 HPD ARX-03b that he shares with team owner Scott Tucker.

“Track position is key for sure," Briscoe said. “Speeds are so close with all the GT cars and the PC cars. We’ll be fighting all day with cars that won’t even be in our class. So tomorrow will be about who can deal with the traffic best, not get in trouble, no penalties, and not putting damage to the car. It’s a fine line, but that’s what we get paid to do."

Friday was the first time the current version of the HPD P2 prototype has gotten significant practice time in dry conditions at Long Beach. Briscoe said the car setup was a bit of a guessing game, and Level 5 guessed right.

“We didn’t have any data to go by from last year because all practice and qualifying was rained out," he said. “We’re kind of blindfolded going in. The team did a good job."

GT
Dominik Farnbacher gave Viper its first ALMS pole in 13 seasons as SRT Motorsports garnered its first fast qualifier honor. The young German set a record lap of 1:18.845 (89.857 mph) in the No. 91 SRT Viper GTS-R that he will drive with Marc Goossens.

The factory SRT Vipers made their ALMS debut in July of 2012, a dozen years since the Viper’s last pole position at Adelaide to close the 2000 season as a factory Dodge effort.

“One year ago the car didn’t exist. So it was still in the minds of the CEOs," Farnbacher said. “Last year we tried to get the baseline set, and be reliable. In Sebring it was the first time we drove really hard. It showed the car was there.

“The car will be really strong tomorrow. The fans can count on a strong viper. It will come down to strategy at half time with the pit stop. Then we’ll see how we can get a good run out of the pit."

“It means a lot to get this pole for Viper and SRT," Farnbacher said. “I’m trying to sort it in my head still. It means a lot to all of us. It’s great getting out of the car and seeing everyone in the pits smiling at you. It’s one of the things you dream about when you’re a little kid."

PC
In Prototype Challenge presented by Continental Tire, Bruno Junqueira won his first Long Beach pole in six years for RSR Racing. His best lap was a 1:16.167 (93.017 mph) in the No. 9 ORECA FLM09 that he drives with Duncan Ende. Junqueira, the 2004 Champ Car pole-winner at the circuit, set a class record and was 0.055 seconds faster than CORE autosport’s Colin Braun.

“When I was getting out of the car I saw Colin was one tenth behind me," Junqueira said. “I was very worried because on Colin’s last lap at Sebring he took the pole from me. He is driving good, and their car is good. There is such good competition in our class and it will be very exciting for the fans. The race will be flat out and we will be pushing hard."

Junqueira was fastest in class during the morning session as well. Long Beach historically has been good to him; he has a runner-up and two third-place finishes in Champ Car to his credit. Luis Diaz qualified third at 1:16.630 (92.455 mph) for PR1/Mathiasen Motorsports.

“It’s very nice. I love Long Beach," Junqueira said. “The crowd is so knowledgeable with the race being here for 39 years. I’ve had fans here with my hero card from 2001 when I first drove IndyCars so the people really know about racing."

Bleekemolen started his final lap with 15 seconds left in the session. He was 0.253 seconds behind Edwards on his last attempt.

“I couldn’t get it together in the beginning," Bleekemolen said. “I made a few mistakes and some big slides. I cooled things down and knew I’d have just enough time to do another cool-down lap and then go for it. That last lap was good. I didn’t make a mistake and was really close to the wall everywhere."

Spencer Pumpelly was third for Flying Lizard Motorsports with a 1:23.014 (85.345 mph) in the No. 45 Porsche. The three fastest cars all were under the previous class record, and the top six cars in class were within 0.895 seconds.

The Tequila PatrÂ¢n American Le Mans Series at Long Beach is the second round of the 10-race ALMS championship. ABC’s coverage begins at 1 p.m. ET on Sunday, April 21 with live coverage is available on ESPN3 starting at 7:15 p.m. ET on Saturday, April 20.