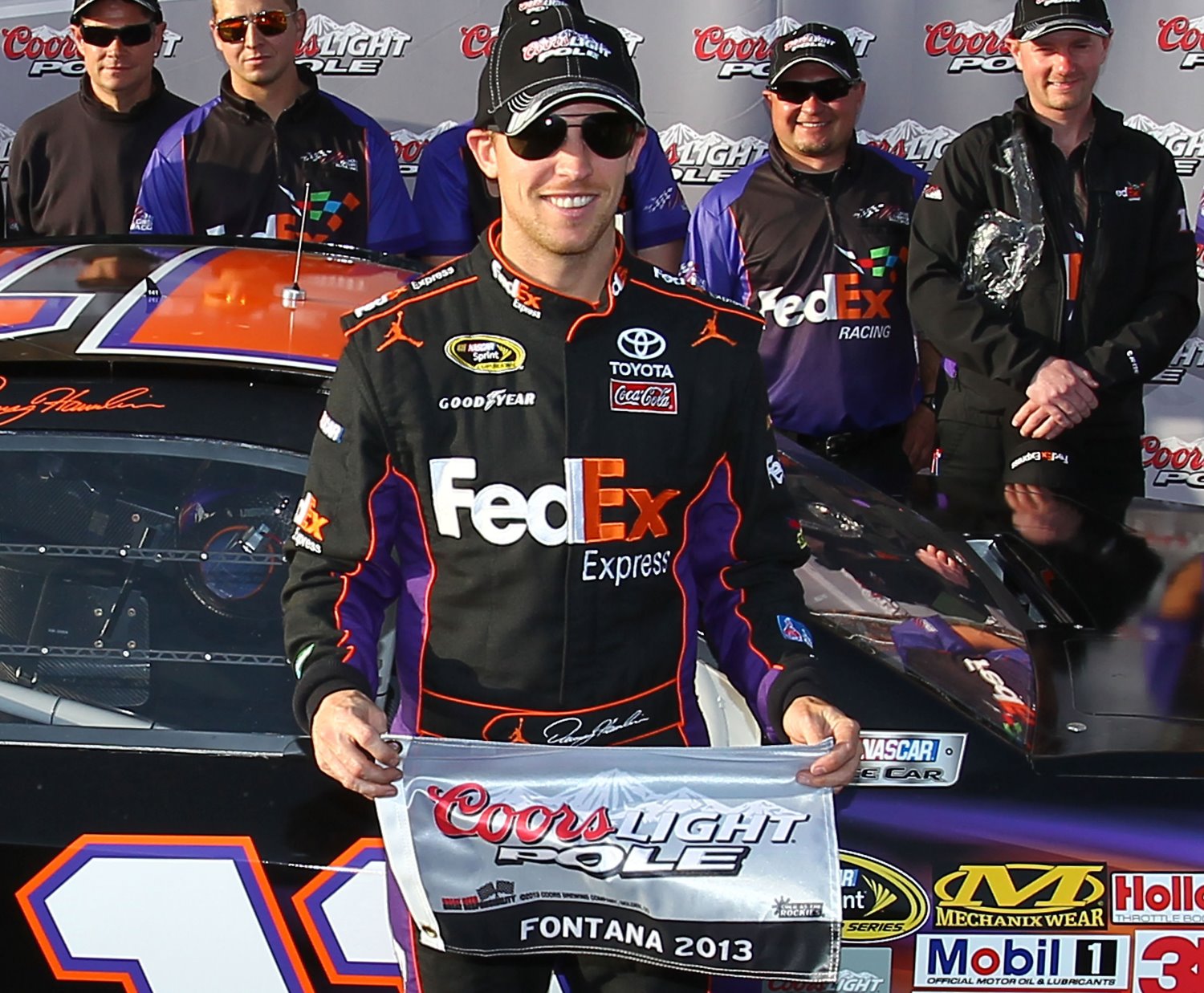 Denny Hamlin edged Greg Biffle and Brad Keselowski for the top starting spot in Sunday’s Auto Club 400 at Auto Club Speedway, but of the three top qualifiers, Hamlin will be the only driver starting at or near the front of the field.

Overcoming an early draw, Hamlin toured the 2-mile track in 38.410 seconds (187.451 mph) to win the 13th Coors Light pole award of his career and his third at Fontana.

Biffle (187.217 mph) was second fastest and Keselowski, the defending NASCAR Sprint Cup Series champion and current points leader, ran third at 187.149 mph. However, both Biffle and Keselowski will start from the rear of the field after changing their Ford engines before qualifying.

As time trials ended, Biffle’s team was tearing down his motor to determine the cause of a failure that occurred early in Friday’s opening practice. Keselowski’s team changed engines after the conclusion of practice because of an issue Biffle believed was similar to his, although neither engine had been analyzed by Friday afternoon.

Kyle Busch and Matt Kenseth, Hamlin’s teammates at Joe Gibbs Racing, qualified fourth and fifth, respectively. Joey Logano, Keselowski’s teammate, claimed the sixth starting position but will move closer to the front of the field — and to Hamlin, his nemesis from last Sunday’s race at Bristol Motor Speedway — when Biffle and Keselowski drop to the rear.

Though conventional wisdom says that drivers will post faster laps later in the day as the track cools, Hamlin, the third driver to make a qualifying attempt, felt the quality of his No. 11 Toyota made the difference.

“Honestly, I think our car was really fast," said Hamlin, who started from the pole at Fontana last year. “I knew, talking to a few people in my motor home… it’s cocky to say, but I said, ‘Man, I can almost guarantee a pole, if we have a late draw.’ When they told me we were third, I was like, ‘OK. Well, just never mind. Forget that.’

“I knew, after running so well here in qualifying before, you kind of get a feel for what you need to do as a driver to hit your points and be fast, and I think our car was just exceptional for a lap or so today."

Keselowski expressed concern of the engine issues that will send him and Biffle to the back.

“I’m a little bit nervous about the engine issues the 16 (Biffle) and the 2 cars had in practice," said Keselowski, who has finished in the top five in each of the first four Cup races this season. “Hopefully, those will subside for the race.

“It’s unfortunate, but it’s kind of what it is, and we’ll have a good time, hopefully, racing to the front."

DENNY HAMLIN, No. 11 FedEx Express Toyota Camry, Joe Gibbs Racing Starting Position: 1st
How was your qualifying lap?
"It was fast. I told my crew I could pretty much guarantee the pole had we qualified — anywhere 20th or later. I knew our car was just ridiculous fast in qualifying trim. They're dragging qualifying out so long right now for TV that it's going to get fast here at the end."

Does anything from last year transfer to the 2013 cars?
"These cars have different bodies on them. They're the same race cars we've been racing for a really long time. So, everything is pretty much correlated."

Did you expect to be good at this track?
"I love this race track. A lot of the reason is because it's bumpy and it's worn out, and we got tire fall off — like three seconds between the beginning of a run and the end of a run. That always makes for good racing. If you polled the drivers, this is one of the favorite race tracks that we go to.

Do you have any 'unfinished business' after last year's rain-shortened race?
"For the record, in my eight years in Cup, I've never benefitted from rain whatsoever. Never have we ever been on the right side of a rain strategy in my eight years. That was just another win that got chalked up to weather. We were pretty strong that day. Another one is Richmond before the Chase last year. We dominated that race and the rain screwed stuff up. We're not going to see any rain this weekend. So, it's going to be a good week."

Is there any track right now that you don't look forward to?
"For me, I really don't care. I love going to all of them, honestly. It used to be like road courses, where I was like, 'I'm not really sure we could win.' But, I think I've been working on my road course skills daily when I'm at home. Hopefully, we'll be better there. We got better road course cars coming down the line. So, I don't know if there's one real race track — maybe Kansas because it's a new paved race track and we know we're going to be on hard tires and it's going to be tough to pass. Other than that, any race track we go to we feel like we can win."

Have you talked to Joey Logano after last weekend?
"No. You guys know that we haven't talked or anything. As far as I'm concerned, there's nothing to it from here on out. Other than reading on Twitter every now and then, and then the media updates — I don't know anything else about it."

Do you regret anything after the incident with Joey Logano last weekend?
"I probably shouldn't have gave that last little jab at the end. Probably should have just left it alone after the question was asked about what he said. You can't as a driver — it's not up to me to determine where he stands among the elite of NASCAR. I think that it's the fans and the teams who decide that. I didn't need to give my opinion on that. I think that was kind of a low blow."