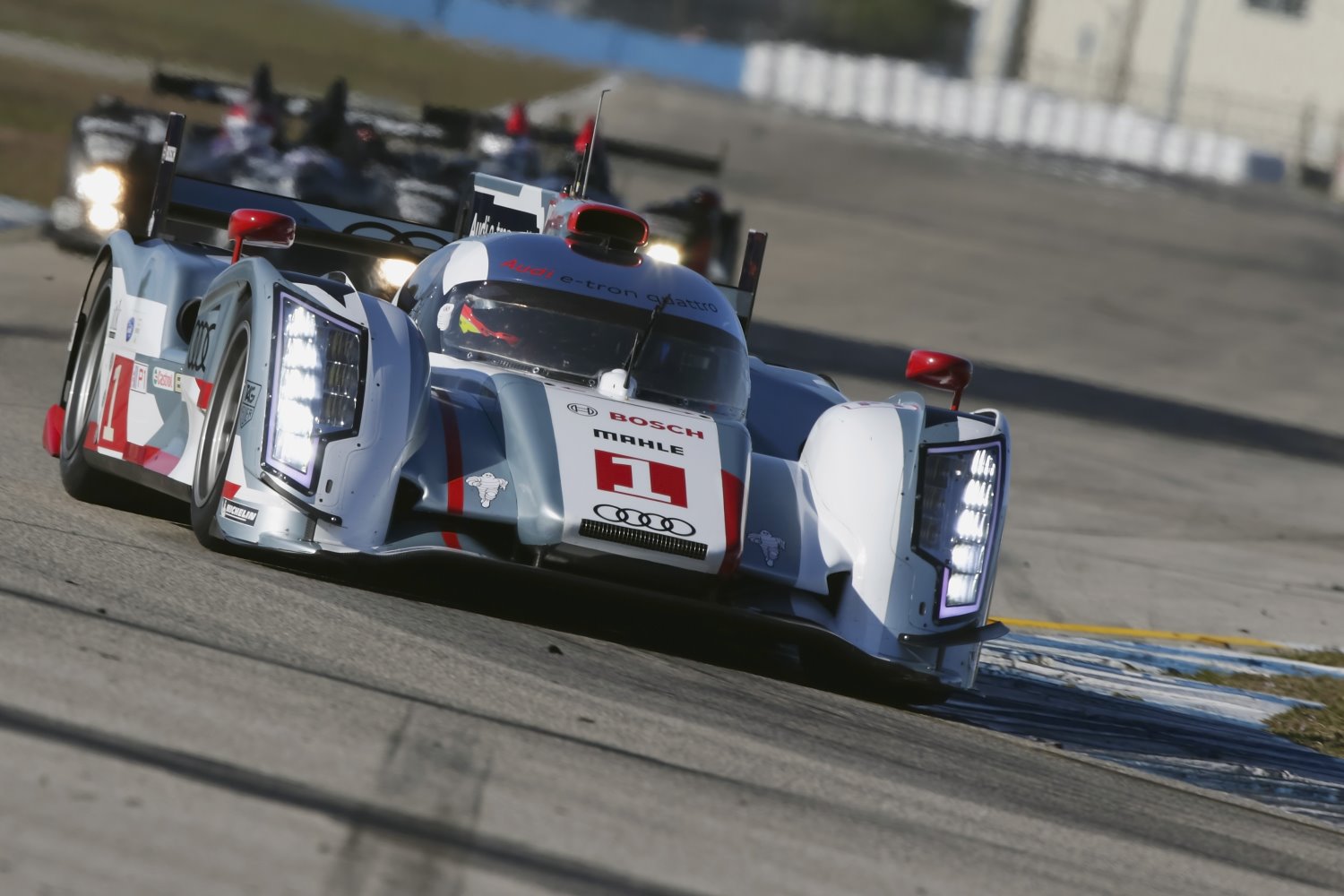 The Swiss took pole for the American Le Mans Series opener with a lap timed at 1m43.886s aboard the 2012-spec Audi R18 e-tron quattro, a mark that McNish came close to equaling on his final lap in the 2013 car.

Former Porsche factory driver Briscoe, who is racing at Sebring for the first time since 2008, set his pole lap of 1m51.159 in the car he shares with Scott Tucker and Marino Franchitti.

Risi Ferrari, Sebring 2013Gianmaria Bruni set two laps good enough for pole in the GT class on the Risi Competizione Ferrari team's return to the ALMS after a year away.

The Italian, who shares the team's Ferrari 458 Italia with Matteo Malucelli and Olivier Beretta, ended up at 1m58.896s, which put him little more than a tenth ahead of Oliver Gavin in the best of the Chevrolet Corvette C6.Rs. Bruni has now claimed three consecutive class pole positions for Ferrari at Sebring. He followed up on his 2012 and '11 poles with AF Corse on his return to Risi this year.

The fastest of the two factory Aston Martin Vantage GTEs ended up third fastest in the hands of Stefan Mucke.

Andy Lally set the pace in the GTC class for the Porsche 911 GT3 Cup, taking pole by three tenths of a second aboard the lead Dempsey Del Piero Racing entry. With years of Audi history on hand this weekend at Sebring International Raceway, Marcel Fassler proved why Audi continues to press the future in sports car endurance racing. A hybrid-powered prototype is on pole position for the first time in the 61st Mobil 1 Twelve Hours of Sebring Fueled by Fresh from Florida. Marcel Fassler set a track record with a 1:43.886 (129.604 mph) in Audi Sport Team Joest’s No. 1 Audi R8 e-tron quattro.

The pole position also is the first for a hybrid car in the American Le Mans Series presented by Tequila PatrÂ¢n, which opens its season Saturday at Sebring. Fassler was only 0.009 seconds clear of Allan McNish in the No. 2 Audi. Both cars were under the existing track record set in 2007.

“It was a really tight battle for the pole," said Fassler, who will drive with Benoit Treluyer and Oliver Jarvis. “My car was already really great yesterday so I knew I could do it. As everyone knows, it not easy to go for pole at this track. It is bumpy and easy to make a lot of mistakes, so the key is make as few as possible."

Audi is looking for its 11th victory at Sebring since 2000. It became the first manufacturer to win a major sports car race with diesel power in 2006, and last season it became the first to win the Le Mans 24 Hours with a hybrid prototype.

GT
Gianmaria Bruni added another highlight to Risi Competizione’s return to full-time ALMS competition with pole position in GT. The Italian set a time of 1:58.815 in the No. 62 Ferrari F458 Italia that he shares with Olivier Beretta and Matteo Malucelli. This marks the fifth GT pole position at Sebring for Risi since 2007 and Bruni’s third straight.

“It was a very close battle, as it always is in GT," Bruni said. “This is very challenging place for qualifying. Three poles in a row with Risi… I don't know why. I like the bumpy circuit. It makes it a bit difficult for everyone."

The top seven cars were within 0.728 seconds, and the entire class was within 1.550 seconds.

P2
Ryan Briscoe saved his best for last to take his first career Sebring pole and first in the ALMS since late in the 2008 season. The Australian set a lap of 1:51.159 (121.124 mph) in Level 5 Motorsports’ No. 551 Honda Performance Development ARX-03b prototype. His time was 0.112 seconds better than teammate Ryan Hunter-Reay in the No. 552 Level 5 entry.

The fight was a familiar one to IndyCar fans as both are open-wheel regulars.

“It's great to be back in Sebring. I haven't been here since 2008," Briscoe said. “It's great to see the hard work from the crew pay off with the pole. It was like old times dialing with Hunter-Reay for the pole. It's been interesting as usual; the track conditions change so much. The wind has a big effect on the car at this place. It's been difficult to remain patient and not chase the conditions too much."

The top four cars were under last year’s record mark, an impressive feat considering this is the first week for the class on Continental Tires. Junqueira’s time was 0.270 seconds behind Braun with Pierre Kaffer third at 1:53.838 for DragonSpeed Mishumotors’ No. 81 ORECA FLM09.

Braun and teammate Jon Bennett, driving with Mark Wilkins, placed third in last year’s race and finished second in the class championship. Braun said nothing short of PC title will do this year; Friday was a great start.

“We really worked hard figuring out the new Continental tire which are great," Braun said. “They should make for a great race. The new tire seems to hold up pretty darn good. We could go out in practice and do simulated qualifying runs. It's hard to get a sense of it with all the traffic we had in practice, but I was surprised to put in that lap at the end. We didn't get to do a lot of simulation to know the drop-off and the optimal temperature, but the tires are holding up really well."

GTC
Andy Lally captured his first career Sebring pole position and one on the debut for Dempsey Del Piero Racing with a 2:05.446 in the team’s No. 27 Porsche 911 GT3 Cup. He outpaced both Alex Job Racing’s Jeroen Bleekemolen and Flying Lizard Motorsports’ Spencer Pumpelly by 0.301 seconds. Pumpelly will start second as he was the first to post the 2:05.747 lap in the No. 45 Porsche.

Lally, driving with team owners Patrick Dempsey and Joe Foster, wasn’t in the top five when he threw down his pole lap.

“The car was really good this morning when we rolled out in the morning practice session," Lally said. “We knew it would get greasy for this session but overcompensated with too much understeer. I cooled the tires down, did an allowed air pressure change and it hooked us up."

The GTC class during the testing and practice sessions was the tightest of the five categories. Prior to Lally’s lap, Bleekemolen was on the provisional pole by less than a tenth of a second, and the top seven cars were within a half-second.

It was a remarkable story for Lally – a Porsche specialist – and the Dempsey Del Piero squad. The team formed late in 2012 and tested its two Porsches at Sebring for the first time less than a month ago. Certainly the highest-profile component of the team is Dempsey, a Hollywood star and accomplished driver in his own right who is racing professionally at Sebring for the first time. Saturday, his Porsche will start from pole position in the ALMS’ biggest race.

“This is a phenomenal car and a phenomenal track for the drivers," he said. “There is such a great history here. I’m so happy to be here and lucky to be here racing. There has a been a lot going on in the last month from when we got the car. But it’s been fun and a great challenge. It’s a great escape to get out of Hollywood and be with everyone."