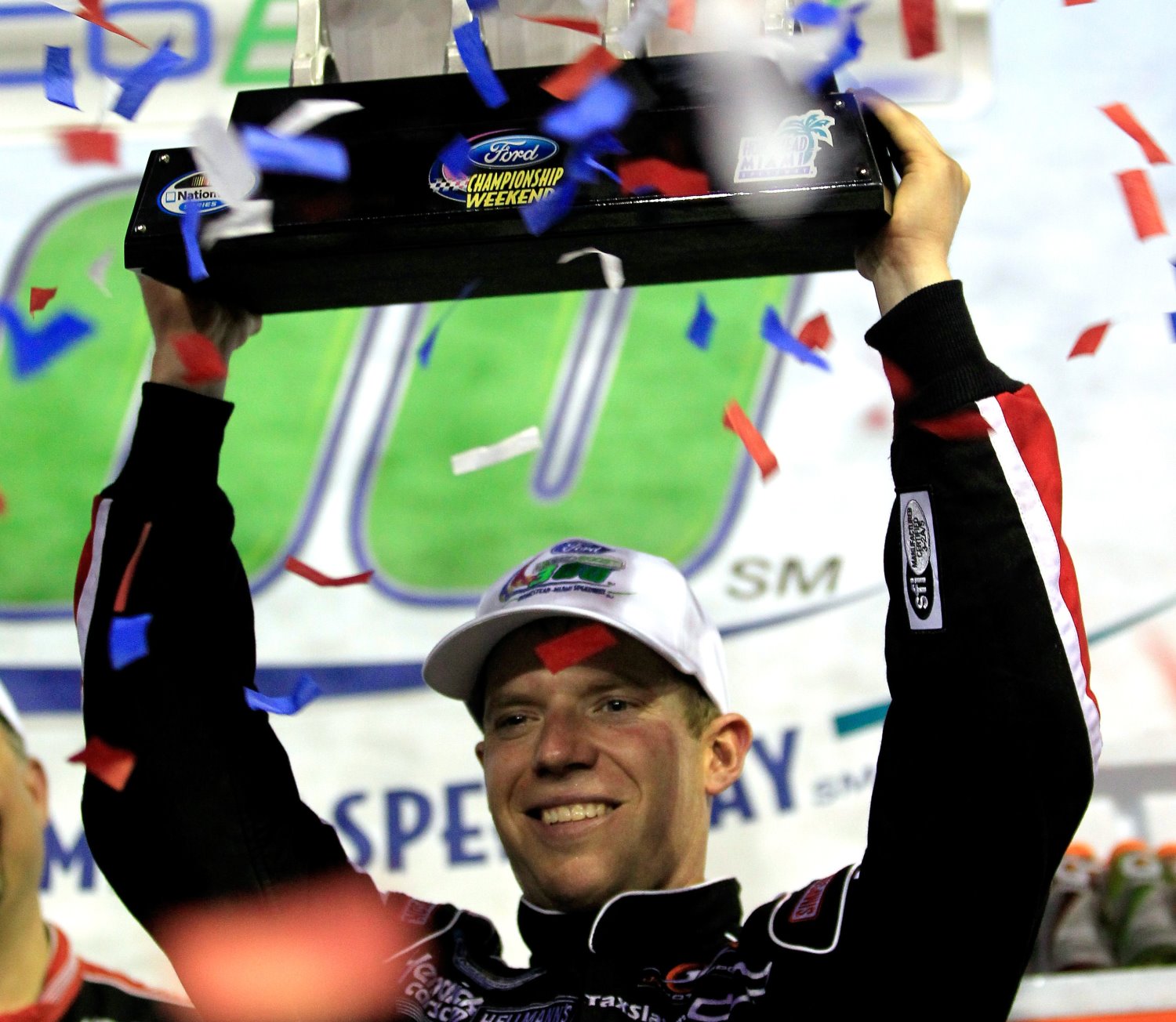 Ricky Stenhouse, Jr. became the sixth driver to repeat as champion in the history of the NASCAR Nationwide Series on Saturday as he clinched his second straight championship in his final race as a full-time Nationwide driver in the Ford EcoBoost 300 at Homestead-Miami Speedway.

Stenhouse, Jr. – who only needed only to finish 16th or better to clinch the title – came home sixth to beat out Elliott Sadler for the title for second year in row, becoming the first driver since Martin Truex, Jr. in 2004 & 2005 to defend his series title.

Stenhouse, Jr. ended the season with a series-high six wins and 19 top-five finishes – including three in the final four races – to beat Sadler by 23 points to bring home the fourth Nationwide Series title for Roush-Fenway Racing.

“It is really neat to be able to go back-to-back when only now six of us have done it. That is pretty special," said Stenhouse. “It really makes me see how hard that 48 (Jimmie Johnson) team works on the Cup side with five in a row. It was a great two years and we have had a lot of fun.

“You know, we won Rookie of the Year in 2010 and we were at the banquet, and we said that we wanted to be (champions) in 2011, and we were able to accomplish that. To sit up there last year, and we told each other that we wanted six to ten wins and another championship, we got that, just a lot of hard work by a lot of great people, and I'm just blessed to be a part of it."

The Nationwide season finale was a similar story to last year’s season finale, with Stenhouse and Sadler coming into the last race within 20 points of each other.

Knowing he needed only to finish ahead of Sadler to win, Stenhouse simply needed to stay out of trouble while Sadler had to do the same, and hope Stenhouse stumbled.

At times during Saturday’s race, Stenhouse was playing it anything but safe.

Trying to race his way to the front, Stenhouse spend much of the final laps battling Dillon, Sadler and Brian Scott, at one point going three wide for the fifth position before falling back to sixth in the final finishing order.

“There were some anxious moments for our spotter, and I got tired of listening, so I keyed up the mic so he couldn't talk to me the rest of the way," said Stenhouse. “He wanted me to let him go, and of course I wanted 20 top 5s at least, so I came up one spot short. We wanted to win the race; that's what we come to do each and every week and that's what got us in the position that we were in."

Saturday’s race was also a story of drivers heading in different directions.

For Stenhouse, it’s was his last full-time run in the Nationwide Series, as he moves up to the Cup Series in 2013 to replace the departing Matt Kenseth as driver of the no. 17 Ford for Roush-Fenway Racing; for Sadler, it’s was his last ride for Richard Childress Racing, as he will not be returning in 2013; For Busch, it was another one that got away; and for Smith, it was his first run for his new team, as he joins Junior Motorsports full time in the Nationwide Series in 2013.

Having lost his ride in the Sprint Cup Series and filling in for Dale Earnhardt, Jr. while he was out with a concussion, Smith was out to prove himself in his first start in the no. 5 Chevrolet and his first in the Nationwide Series since 2007.

Smith grabbed the lead on a restart on lap 179 with a four-wide pass on Dillon, Sadler and Kevin Swindell and then pulled away to a half-straightaway lead that he held to the finish for his first series win in 103 starts.

“You look at it outside of the champions, there's only three other people that are going to leave here happy from Homestead this year, and fortunately we're one of the teams that can," said Smith. “It's what we needed to do tonight. Our goal was to come down here and get information, get data, get knowledge for next year, figure out areas that we can do better next year."

Busch finished up in the runner-up spot for the third time this season, still looking for that first win with his own Kyle Busch Motorsports team, and, like in the truck series, went winless for the season for the first time since his rookie year in 2003.

“I think it's been well documented that this has been the absolute worst year of my career, bar none. It's been a huge disappointment," said Busch, who led a race-high 89 laps. “I'm more excited about this year being over than anything else in my entire life. You know, happy to go home this off-season, spend some time with my wife and relax and enjoy unpacking all of our boxes and everything. We've been living out of suitcases for the past three months. It'll be finally nice to sit down and get home."