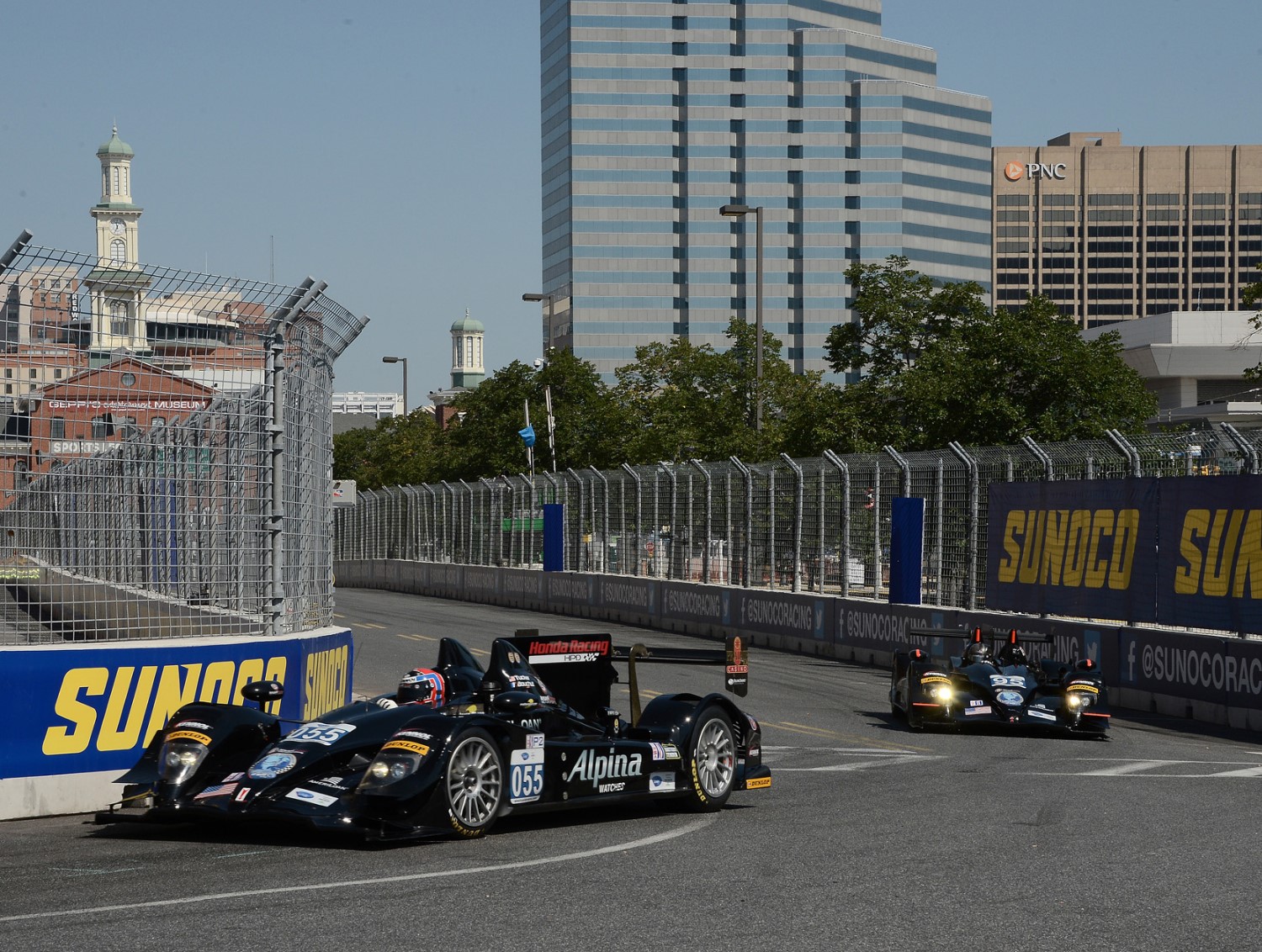 Christophe Bouchut and Scott Tucker led a 1-2 finish for Level 5 Motorsports at the Baltimore Sports Car Challenge presented by SRT on Saturday, the team’s second overall win in the American Le Mans Series presented by Tequila Patron this year. Bouchut, the P2 pole-sitter in the No. 055 Honda Performance Development ARX-03b prototype, beat Luis Diaz in the No. 95 entry by 2.158 seconds as the two P2 cars led the way in an wild race on the streets of Baltimore.

Level 5’s finish was just one of a series of unpredictable and stunning race for the ALMS at the street circuit on Baltimore’s Inner Harbor. Thirteen cars from four classes finished on the lead lap in a topsy-turvy affair.

Wolf Henzler and Bryan Sellers were repeat winners in GT for Team Falken Tire in their No. 17 Porsche 911 GT3 RSR. Sellers held off Corvette Racing’s Oliver Gavin by 2.208 seconds as the Falken Porsche drove the last 70 minutes on a tank of E85 and same set of tires. Two caution periods in the last 16 laps helped the field – including the top five GT runners – stretch its fuel mileage.

Henzler picked up two spots at the start in a Turn 1 melee that blocked a portion of the track. He was able to sneak to the inside and continue. He took Falken’s first lead 21 minutes in and pitted from the lead 22 minutes later.

“Today it was Bryan’s win and race," Henzler beamed. “He did a really good job; on all the restarts he stayed in front. I was lucky enough nothing happened to my car (at the start) and it was still in good shape after that. We talked about different strategies before and they called me two turns before the pit entry. It was the right call."

And just as he did last year in a race against BMW’s Dirk MÃ¼ller, Sellers held his own against one of the ALMS’ best in Gavin over the final 73 minutes. The two cars held their position throughout with the No. 4 Corvette C6 ZR1 unable to make a move on the Porsche. Sellers said he thought the Falken tires were better on restarts than the Corvette’s tires which allowed him to build a gap in the first handful of laps after a restart.

“One of the worst sights in racing is having Ollie Gavin behind you in a Corvette," Sellers admitted. “It was difficult to keep them back there. Our strength was certainly opening the gap after the restarts. I don't know if the Corvettes got pick-up but we could keep the pace no problem over the stint. We weren't the fastest car, but we talked about lasting the longest. The biggest thing about street course victories is the team. The strategy has to be good, and the pace has to be good. Everyone worked well together so well."

Up front, the two Level 5 cars led three times for 32 of the 67 laps in taking their second overall ALMS victory of the season. Tucker, Bouchut and Joao Barbosa were the highest-finishing ALMS drivers at Sebring in a combined event with the FIA World Endurance Championship.

Prior to that, the last P2 team to win overall was Andretti Green Racing at the 2008 Detroit street race. Saturday’s result gave Level 5 an added boost in the P2 championship it continues to lead.

“I don't think we tried to win overall. We just wanted to finish," said Bouchut, who was the P2 pole-sitter. “Now with the overall win, it is fantastic. It is the first time for Level 5 to be 1-2 overall. What can we say? It is a wonderful day."

Bouchut got around teammate Diaz with a little less than 20 minutes left for the overall and class lead. The two Level 5 cars fought throughout the race with Conquest Endurance’s David Heinemeier-Hansson and Martin Plowman.

Heinemeier-Hansson took Conquest’s first lead at the 18-minute mark when he got around Tucker shortly after the race’s first restart. The Morgan-Nissan held the lead until Heinemeier-Hansson pitted 45 minutes into the race and handed off to Plowman. It appeared that another showdown between he and Bouchut loomed for the race victory until Plowman’s suspension broke with 20 minutes left.

“The guys from Conquest have a really strong driver lineup," Tucker said. “Their car is just a better car for this track. We anticipated that. We wanted to take no chances and just be really steady with the car. This is where the infrastructure of the team comes in to place. We think we deserved it so this is a great day."

Dyson Racing’s Eric Lux and Michael Marsal won the P1 race in their No. 20 Lola-Mazda. The duo recovered from an opening-lap melee that dropped it 25 spots and went clean the rest of the way. It was the first ALMS win for Marsal and first in P1 for Lux.

“It was absolutely a mistake on my start," said Marsal, who added that the fire extinguisher in the car inadvertently went off on the pre-race grid. “I didn't have my head in the race at the start. Overall it was a major high and a major low. The impact made the car perfect; it was the final touch. The Dyson team gave us a great car, and we had a great setup. I had to drive a lot more aggressive. I had to own up and show it was my fault and make it up to the boys on the team."

“Every day you wake up and want to win the race," Lux said. “Mike gave me a great car, drove it up to the front during his stint and I didn't give it up. This track is abusive, not only the tires but the engine as well. The Mazda power really held up. It was a fun and fantastic race as a team."

CORE autosport’s duo of Alex Popow and Ryan Dalziel won in Prototype Challenge and finished third overall in their No 06 ORECA FLM09. It marked the second straight win for Popow, who won two weeks ago at Road America with Tom Kimber-Smith. RSR Racing’s Bruno Junqueira and Tomy Drissi finished second, 7.670 seconds back.

Popow made it through the Turn 1 madness unscathed, and Drissi was the only other PC car to do the same. Popow, the PC championship leader in the driver’s standings, and Dalziel led the entire race.

“I'm convinced Alex had his eyes closed on the start," Dalziel said. “I’ve done enough street courses now I know that being in the lead is the easiest time to make a mistake. I think you have to keep focused and keep pushing."

CORE clinched the PC team championship in the last round at Road America, and Popow built up his lead when the No. 05 sister car retired after just 31 laps. That makes his escape at Turn 1 that much more critical.

“It was an amazing start," Popow said. “Tomy was starting from pole on the inside. I knew the start would be my chance to get around him. You cannot know where all the cars are going, but it worked for me on an amazing start."

TRG’s Al Carter and Patrick Pilet won in GT Challenge in their No. 68 Porsche 911 GT3 Cup. Pilet held off a late charge from Leh Keen in Alex Job Racing’s No. 22 Porsche as the top four cars finished within 1.696 seconds. Keen drove with Cooper MacNeil, the leader in the GTC driver’s championship.

“It got exciting as the GTC class always is," said Carter, who started from the back of the field because the car didn’t make qualifying Friday. “I didn't go through Turn 1 very fast. I was looking to make up positions easily and aggressively."

He did just that and pitted from the lead at the 45-minute mark. Keen inherited the lead but Pilet made what ended up as the winning pass 18 minutes later under extremely tough conditions. Both drivers had issues with cool suits, Carter said. Oil covering the Porsche’s windshield in the last 15 minutes made Pilet’s task even more challenging.

“After starting last in the field with no qualifying time from a practice accident, our car was great all day," Pilet said. “Al kept us on the lead lap, and I knew I could compete for the win."

Said Carter, “Patrick drove this car as tough as anyone could, he really did a great job keeping the pace."

Damien Faulkner and Peter LeSaffre were third for Green Hornet Racing in the No. 34 Porsche.

The next round of the ALMS championship is the American Le Mans Series presented by Tequila PatrÂ¢n VIR 240 from Virginia International Raceway. The four-hour race is scheduled for 2:30 p.m. ET on Saturday, Sept. 15. ESPN2's broadcast begins at 5 p.m. ET on Sunday, Sept. 16. Full, live coverage starts at 2:15 p.m. ET on ESPN3.