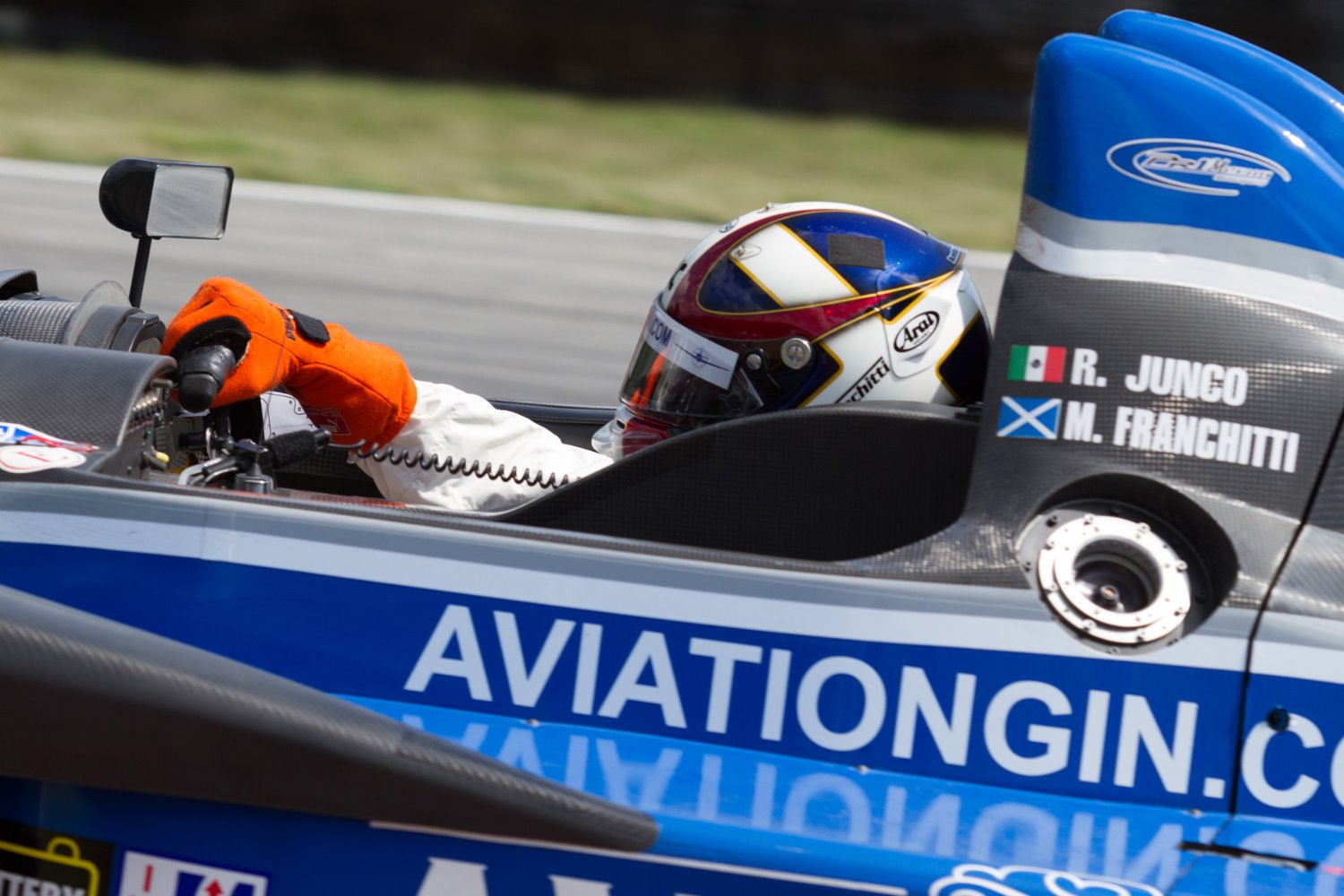 Rarely has a race driver savored a victory more than Marino Franchitti after teaming with Rudy Junco to pilot the PR1/Mathiasen Motorsports ORECA FLM09 to a Prototype Challenge win two weeks ago at Mid-Ohio. Not only was it Franchitti’s first win of the season, it came in just the second time he actually raced an automobile in competition in 2012.

It has been THAT kind of year for Franchitti . . . a season that once seemed filled with promise has more often than not delivered disappointment. A deal with Peugeot evaporated when the French automaker abruptly withdrew from the FIA World Endurance Championship in January. After Franchitti co-drove the SpeedSource Mazda RX8 to sixth place in GT in the Daytona 24 Hours, he signed on with the Nissan DeltaWing project and did the lion’s share of the testing for the innovative car’s debut at the 24 Hours of Le Mans.

Alas, an accident during the seventh hour sidelined the DeltaWing before Franchitti had a chance to race it in anger. Then he joined PR1/Mathiasen for the ALMS’ round at Canadian Tire Motorsport Park – only for the Quest Software/ Aviation American Gin entry to be eliminated in a Lap 26 crash. Needless to say, Franchitti was due to drive the second stint of the race.

So he was especially pleased to join Junco atop the Mid-Ohio podium, having grabbed the lead with two laps remaining when the class leader Ryan Dalziel pitted for a splash of fuel.

“It’s a nice debut," Franchitti said, tongue at least partially in cheek. “We were very evenly matched with Ryan, but we started reeling them in. The guys came on the radio and said he might have to pit and I thought ‘Yeah, whatever.’ I just wanted to keep pushing, no matter what … It’s nice to be back in victory lane in the ALMS."

Of course, Franchitti is no stranger to victory lane in the American Le Mans Series. Driving for the likes of Andretti Green, Dyson, Highcroft and Level 5 Racing, he has scored five wins – including the 2010 Petit Le Mans – in an assortment of machinery from the Porsche RS Spyder and Lola-Mazda to the HPD ARX-01c.

But that can’t compare to the assortment of race cars he’s driven in the past 10 months from Level 5’s HPD ARX-01g and the Peugeot 908 HDi FAP to the Mazda RX8 to the DeltaWing and now the ORECA FLM09. In less than a calendar year he’s matched some of his heroes on the versatility-meter.

“Dan Gurney, Mario Andretti, Jim Clark," he smiles. “They drove just about everything and were competitive from car to car to car. Something is lost these days when drivers specialize in just one car or one form of racing. Of course you need to do full championships, but it’s also important to race different cars. It keeps you sharp, keeps you learning.

“Peugeot, Mazda, DeltaWing, HPD, ORECA … they’re all different, all have their nuances. But it’s important that I’m competitive no matter what I drive."

Franchitti will add another car to his repertoire in mid-September when he competes in the Goodwood Revival. Last year he drove an Aston Martin DB4 GT Zagato in the RAC TT Celebration and, while his mount for the 2012 Goodwood Revival has yet to be finalized, the fact that he will drive a great race car from the past dovetails nicely with the fact that so much of this year was devoted to a race car that points to the future.

“I really enjoyed with the DeltaWing," Franchitti says. “To be involved in that program from scratch rather than developing a more or less proven product, was very rewarding and, again, similar to what went on with some of the ‘radical’ new technologies in the 1960s. I’m very proud of what we achieved with the DeltaWing, even though we only scratched its potential.

“It’s a very popular car with the fans and it would be great to have it in the ALMS. That’s not something I’m involved in, but a lot of people want to see it here in the ALMS . . . including me."

For the foreseeable future, those people will have to settle for seeing a DeltaWing driver in Franchitti. He’s clearly enjoying his new association with PR1/Mathiasen, and not just because he’s finally racing – and winning – again.

“It was a pleasure to work with Rudy (Junco) all weekend," he said at Mid-Ohio, “and I’m delighted with the whole P1 team. Mosport was more of a baptism by fire, but to come here and get pole, fastest lap and win the race was pretty much a perfect weekend. This was a very fun win, an exciting time. I'm looking forward to the next race for sure."

The key word there is “race" because, at last, Marino Franchitti is racing. And looking to up his batting average to .667 at Road America.