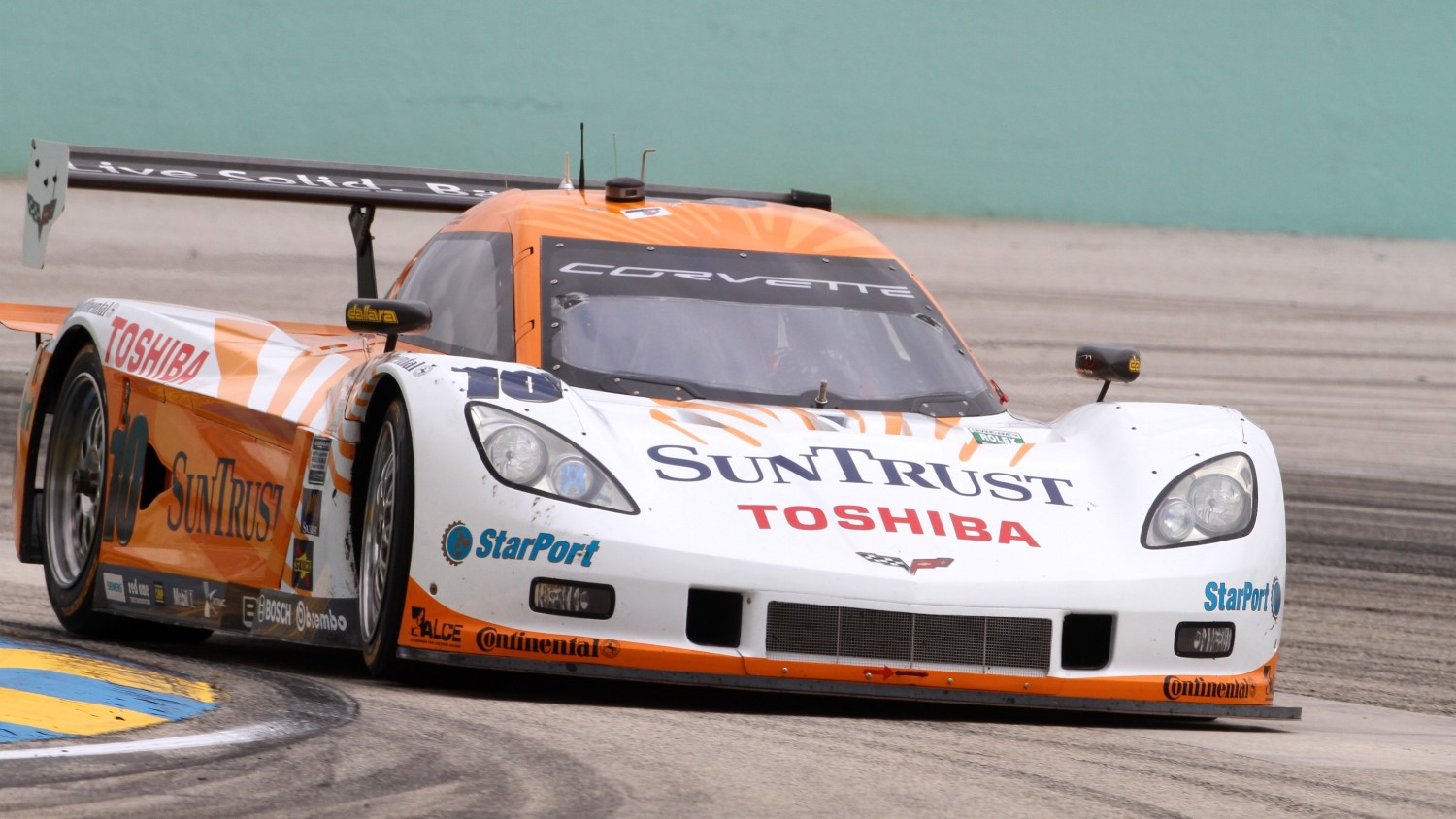 After a tough start to their season, luck was on SunTrust Racing's side at Homestead-Miami Speedway, as Ricky Taylor and Max Angelelli won Sunday's rain-shortened Grand Prix of Miami. The contest was shortened following downpours that resulted in a lack of visibility for drivers.

It was the first victory of the season for the No. 10 SunTrust Corvette Daytona Prototype (DP) and 19th career DP win followed by Scott Pruett and Memo Rojas in the No. 01 TELMEX BMW/Riley, and David Donohue and Darren Law in the No. 5 Action Express Racing Corvette DP.

In spite of the win, Ricky still had empathy for the crowd at the track: “It would have been nice for the fans. It was very wet and it’s a shame that we didn’t have better conditions."

The extremely difficult conditions, which hampered a number of drivers through the rain-soaked first half of the race, played into the hands of Taylor, who took the lead on Lap 28 following contact between the leading Spirit of Daytona Corvette DP of Richard Westbrook and the No. 8 Riley-Ford of Ft. Lauderdale-based Starworks Motorsport driven by Enzo Potolicchio.

“It was really, really wet. I was hoping to go on the inside of the 8 car, and I saw he carried quite a bit of speed," Taylor said. “I guess he got into the back of the 90, and then I just saw them both going around and just tried not to get involved."

University of Miami graduate and 2010 Grand Touring (GT) class winners Jeff Segal and Emil Assentato, aboard the No. 69 AIM Autosport Team FXDD, took the top spot in GT to score the first victory for the new Ferrari 458 Italia Grand Am. With the win, Segal and Assentato take over the championship points lead after three rounds of the GRAND-AM season.

“I definitely consider this one of my home town tracks," said Segal. “We’ve had some success here [at Homestead-Miami Speedway] and both Emil and I like it. It's absolutely fantastic to give Ferrari its first win back in the Rolex Series in only our third race is spectacular. Emil drove his butt off today. It was treacherous in the end but we had a lot of fun racing in. I charged my way through the field and had some fun there. I'm happy to get this win.""

Steady rain fell throughout the event causing conditions to deteriorate and leading race officials to halt the event after two hours (45 minutes short of the scheduled distance).

Dane Cameron and Wayne Nonnamaker took second in the No. 42 Team Sahlen’s Mazda RX-8, followed by Robin Liddell and Ronnie Bremer in the No. 57 Stevenson Auto Group Chevrolet Camaro.

Max Angelelli and Ricky Taylor’s victory in Sunday’s Grand Prix of Miami may be accompanied by an asterisk in the record books thanks to its rain-shortened finish, but they and their No. 10 SunTrust Corvette Dallara DP of Wayne Taylor Racing teammates feel it’s perfectly appropriate to punctuate its efforts in today’s rain-soaked GRAND-AM Rolex Sports Car Series race at Homestead-Miami Speedway with an exclamation point.

Angelelli, the veteran Italian who has been the SunTrust team’s finishing driver in sprint races since joining the Rolex Series in 2004, made his first non-endurance race start today and masterfully moved the SunTrust Racing machine from its starting position of ninth to third during his opening stint, which took place under rainy and oftentimes treacherous conditions on the 2.3-mile speedway road circuit.

He then handed the racecar over to his 22-year-old, third-year SunTrust Racing co-driver during a yellow-flag stop 27 laps and just 40 minutes into the scheduled two-hour, 45-minute race. The SunTrust team was one of just a small handful of competitors to pit at the point, and Taylor resumed in third behind the No. 90 Spirit of Daytona Corvette DP of Richard Westbrook and the polesitting No. 8 Starworks Motorsport Ford Riley of Enzo Potolicchio, neither of whose teams opted to stop during the caution period for heavy rain.

When the race finally restarted on lap 27, Taylor deftly slipped past on the inside when Potolicchio bumped Westbrook off the track and out of the lead in turn two and put the SunTrust Corvette DP in the lead for the first time this season. Taylor smartly yielded when Potolicchio challenged him on the ensuing lap, but Rolex Series officials penalized the Starworks Ford driver for the earlier contact with Westbrook, putting Taylor and the SunTrust Corvette DP in the lead for good when Potolicchio served the penalty on lap 30.

From there, Taylor maintained a hefty 17- to 22-second lead over defending series champion Scott Pruett in the No. 01 Chip Ganassi Racing with Felix Sabates BMW Riley over a 13-lap green-flag span in continuing rainy conditions until the yellow flag waved once again on lap 42 with just over an hour left on the race clock. This one was for the No. 9 Action Express Racing Corvette DP of Joao Barbosa that was stopped on course. Taylor continued to lead the field behind the pace car while the rains intensified and the track conditions became more and more treacherous.

Rolex Series officials decided enough was enough and, on lap 54, the checkered flag was waved to bring an end to the race 52 minutes before its scheduled conclusion. Pruett, whose Ganassi team was one of the only other teams to pit when the SunTrust team did on lap 27, finished in the runner-up position while the No. 5 Action Express Racing Corvette DP team of David Donohue and Darren Law finished third.

“It was a good day for SunTrust Racing and the Corvette DP," said Angelelli, who scored his 19th career Rolex Series win, a total that includes five with Taylor as his co-driver the past three seasons. “Obviously, we had a good car. We felt we could really get this done during the (Sunday-morning) warm-up. In the rain, our car was really good. It was also good during practice in the dry. Obviously, we’re very happy."

Today’s victory vaulted the SunTrust team from ninth to fifth in the Rolex Series standings after three of 13 rounds this season. It trails the new series leaders – the No. 01 Ganassi BMW of Pruett and Memo Rojas – by nine points (87-78).

“Every year we come here, we’re not really looking forward to it because our car doesn’t normally suit this track," said Taylor, who co-drove with Angelelli to a third-place finish here last year after leading a race-high 47 of 116 race laps in the dry. “Our guys did a great job today. I think, even in the dry, we had a winning car. And then, in the race, Max did an unbelievable job as always, getting up to third, so all I had to do pretty much was avoid the crash in turn two and then not crash myself. It was pretty good."

Team owner Wayne Taylor, who co-drove to SunTrust Racing’s last Grand Prix of Miami win alongside Angelelli in 2005 en route to that year’s Rolex Series championship, was especially proud of today’s much-needed victory in light of his team’s shockingly early exit at the season-opening Rolex 24 At Daytona, despite the fact it was a rain-shortened victory.

“Firstly, a win is a win, no matter what," Taylor said. “That’s what we do. Actually, on our way down (to Homestead from the Taylor residence in Orlando on Wednesday), Ricky and Max said we’ve had so many problems at this track over the years that it might be a great thing for us if it rained here this weekend. And it rained. We had a good car, a great engine, Max and Ricky did a fantastic job, nad the guys worked up a great strategy. But it was still tough. It’s not like we were just cruising around in the rain all day. There was a lot of racing today. Max did a fantastic job coming from ninth to third. He was calm on the radio despite the conditions, he never put the car under any kind of stress. He was the Max I’ve always known who knows how to win. And Ricky was Ricky. He did great. He said that he could manage the pace, no problem. Today’s result helped us quite a lot in the points. You always need those kinds of things to happen, and now we’re right back in the championship."

The next event on the 2012 Rolex Series tour is the Global Barter 250 at New Jersey Motorsports Park in Millville on Sunday, May 13. Race time is 1 p.m. EDT with SPEED carrying the television broadcast live.