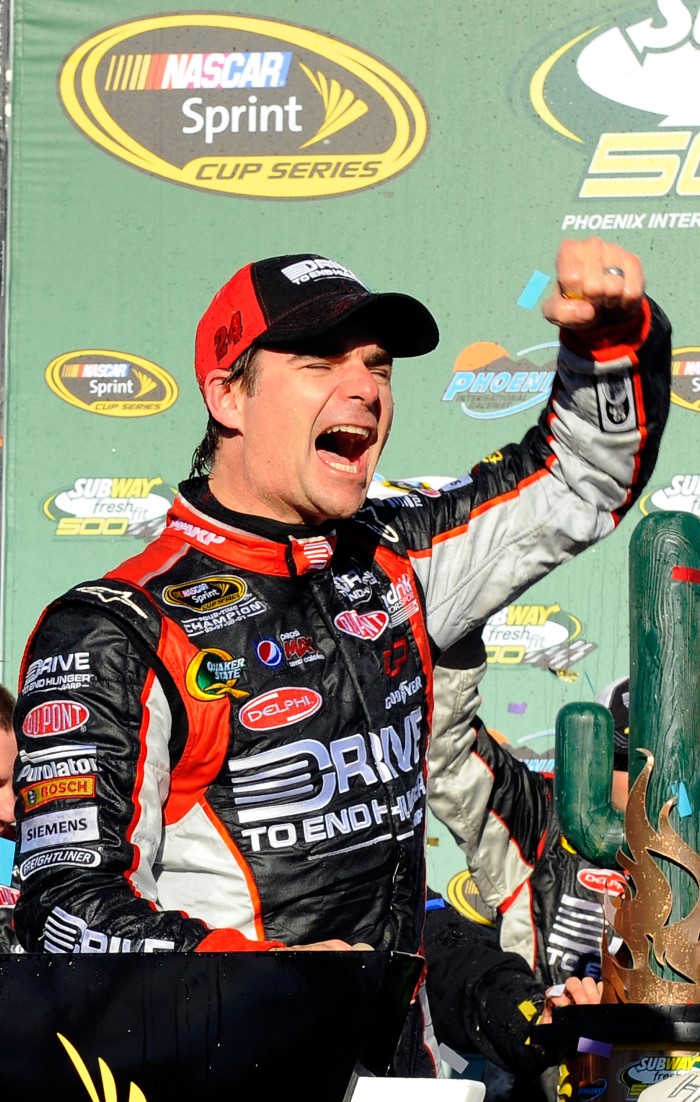 After a long, and even bizarre, weekend at Daytona, the elite of the NASCAR Sprint Cup Series will be criss crossing the country to the valley of the sun for three hundred plus laps on the Phoenix International Raceway. The Subway Fresh Fit 500 (k), on PIR's one mile oval, will be a drastic change from last weekend's Daytona elements such as restrictor plates and bump drafting. It's already being regarded by many of the teams as the return to "real racing."

We, of course, already know what the number one NASCAR racing story will be during the Phoenix weekend. You will hear a lot about the recent penalties levied against the Hendrick Motorsports #48 team after they failed to pass a technical inspection at Daytona. Throughout the weekend this story will be scrutinized, editorialized and everything except vaporized.

Crew chief Chad Knaus, along with car chief Ron Malec, were suspended for six races. Knaus was additionally fined $100,000 and the team was docked 25 driver and owner's points. You will hear a lot of back and forth debate about the fairness and the harshness of these penalties.

Knaus and Malec will be in the Phoenix garage this weekend conducting business as usual. That's because of the appeal filed by team owner Rick Hendrick. Their suspension will not become effective until the NASCAR Board of Appeals has rendered a final decision.

You will also hear speculation regarding how these penalties, especially the loss of the championship points, could become a major distraction for driver Jimmie Johnson. Don't even give that a second thought. Once this five time champion places that racing helmet on his head, he will be activating his outstanding ability to focus on the job at hand. His Phoenix numbers are strong. In fact some prominent Las Vegas sports book agencies has him favored to win Sunday's race. They also have him favored to win his sixth Sprint Cup championship this year. Also remember that the last time this driver had to go without the services of Knaus, due to a suspension, he won two races. Jimmie Five Time is going to be just fine.

The other huge story you will hear a lot about, from Phoenix this weekend, involves last Thursday's announcement that said Roger Penske will be switching to Fords beginning in 2013. This is not Penske's first association with the Blue Oval" group. He had a successful run with Ford from 1995 to 2002 before switching to Dodge during the last eight years. It appears that Ford has made a long term commitment with Penske Racing that also may include business ventures outside of NASCAR racing such as Penske's new car dealerships.

However the one aspect of this announcement that will create a lot of speculation this weekend is centered around Dodge's future plans in NASCAR. The Penske organization was literally their banner team in the sport. Signing another high profile team owner will be extremely difficult, if not even impossible, at this point in time because many of the teams are already locked into long term manufacturer's contracts.

Also bearing some attention at Phoenix this weekend will be the performance of the new electronic fuel injection engines under "real racing" conditions. The season opener at Daytona, with drafting being such a huge factor, was not regarded by crew chiefs as being a true representation of what to expect from these engines. The computer data they will accumulate this weekend will be far more valuable and will apply to many of the tracks coming up on the racing schedule. This is especially true in the area of fuel mileage.

Crew chiefs will also be busy this weekend adding to their Phoenix notebooks. This will be only the second race ran on the raceway's new configuration which was completed late last year. Last November's race at PIR is currently the sole source of crew chief notes at the moment.

To get a more accurate idea regarding who's going to be having fun in the valley of the sun, we once again turn to the number crunching professionals from the "Las Vegas Insider", (LVI), who has a long track record of racing accuracy.

Topping the "LVI" rankings for Phoenix is Jimmie Johnson at 5 to 1 odds. Johnson will be a man on a mission this weekend. A lap two crash at Daytona, combined with the recent loss of 25 driver's points from the aforementioned penalties, has Johnson at the bottom of the standings at negative 23 points. The good news here is this driver's outstanding Phoenix numbers which could help his road to recovery. In 17 starts, Johnson has a series high, among active drivers, four wins along with 11 top five finishes and 14 top tens. He also has an outstanding average finish ratio, (AFR), of 5.4. That makes Johnson an outstanding wager consideration.

Next in line, at 6 to 1, is Kyle Busch, a previous Phoenix winner with two top fives, eight top tens and a 14.6 AFR. While his PIR numbers aren't the strongest in the world, we have to remember it's Kyle Busch behind the wheel. If anyone can charge to front and win Sunday's race this is the guy.

Leading the Ford group is Carl Edwards, at 7 to 1, who has some impressive numbers at Phoenix that includes a previous win, six top fives, ten top tens and a healthy 12.3 AFR.

At 8 to 1 you will find Jeff Gordon who is the defending race champion. Like his team mate, Jimmie Johnson, Gordon also finds himself in a first race of the season points hole due to a blown engine at Daytona. However, PIR is an excellent place for Gordon to rectify that situation. He's a two Phoenix winner with ten top five finishes, 18 top tens and a very healthy AFR of 10.9.

At 9 to 1 you will find the duo of Tony Stewart and Kasey Kahne. Stewart is a previous winner at PIR and has eight top fives, 11 top tens and a healthy 11.3 AFR. That makes the reigning Sprint Cup champion a solid wager consideration.

Kahne won the Phoenix race last November after spending a season with Red Bull Racing while waiting to begin his new ride with Hendrick Motorsports. Kahne also has two top fives, five top tens and a 19.1 AFR. There has been a lot of, and highly justified, pre season chatter that says expect a lot from Kahne and his new team. That makes him a worth long shot wager consideration. Interestingly enough, Kahne will be using a chassis that has already made two trips to the PIR victory lane. Kyle Busch drove that chassis to a win back in 2005 and Mark Martin scored with it back in 2009.

At ten to 1 is the tandem of Kevin Harvick and Matt Kenseth. Harvick, at these odds, is also a worthy long shot consideration. He a two time Phoenix winner with four top fives, eight top teams with a 14.1 AFR.

Can Daytona 500 winner Matt Kenseth make it two wins in a row? He's a previous PIR winner with five top fives, eight top tens with an 18.1 AFR. Also remember he has one of those high powered Roush Yates engines under his hood.

Turning to the "LVI's" middle tier, you will find Greg Biffle and Brad Keselowski at 16 to 1 odds. At 18 to 1 are Kurt Busch and Ryan Newman both, of whom, are previous Phoenix winners. But it's Dale Earnhardt Jr, at 20 to 1, that could be an interesting long shot consideration. Phoenix could be a good track to rid himself of that 130 race win less streak. He's a two time winner there.

At 28 to 1 you will find the trio of Clint Bowyer, A J Allmendinger and two time Phoenix winner Jeff Burton. Martin Truex Jr is ranked at 30 to 1 this week followed by the duo of Joey Logano and Juan Pablo Montoya at 35 to 1.

At the lower end of the "LVI" Phoenix numbers are Paul Menard and two time race winner Mark Martin. Jamie McMurray is ranked at 50 to 1 this week. Regan Smith is rated at 60 to 1 followed by Marcus Ambrose at 75 to 1. The quartet of David Ragan, Bobby Labonte, Robby Gordon and David Reutimann closes out the rankings at 100 to 1. All other drivers, not mentioned here, are automatically on the 50 to 1 "others" list.

Now for the disclaimer: NASCAR wants us to remind you that these numbers are for information and entertainment purposes only. They neither encourage nor condone the placing of wagers on their races. But if you're going to do it anyway, then you may as well have the latest, and best, information from the professionals at the "Las Vegas Insider."

You can also consider using your gambling budget to make a contribution to the Chad Knaus legal defense fund, (settle down everyone, I'm only kidding).

The race has 44 entries vying for the 43 starting positions. Nine of those entries are on the go or go home list meaning they do not have a guaranteed start in the race because they are currently outside of the top 35 in NASCAR owner's points. These teams will have to rely on qualifying speed to earn a starting berth.

The defending race champion, from February 2011, is Jeff Gordon. Kasey Kahne won the fall race in Phoenix held last November. The first NASCAR Sprint Cup race at Phoenix was held in 1988 and was won by Alan Kulwicki. Since that time PIR has hosted 31 Cup events that has sent 22 different winners to victory lane.

Jimmie Johnson leads the active driver's win list with four trips to the Phoenix victory lane. Chevrolet seems to be the weapon of choice at Phoenix. The bow tie brigade has 15 wins there. The Chevrolet teams from Hendrick Motorsports has won seven of the last ten Phoenix events.

The Phoenix International Raceway was officially opened in 1964 featuring a one mile oval with a connecting 2.5 mile road course. PIR is basically a flat track. There are only 11 degrees of banking in turns one and two and nine degrees in turns three and four. The front stretch measures 1,179 feet and is banked at three degrees. The back stretch measures 1,551 feet with nine degrees of banking. Pit road measures 1,140 feet. The pit road speed is 45 MPH. The raceway presently has seating for 55,000 fans.

Weather should not present a problem for the drivers this weekend. The Phoenix forecast calls for sunny skies and 73 degrees on Saturday. The Sunday weather will also be sunny with a high of 82 degrees.

The Subway Fresh Fit 55 (k) will be broadcast live by the Fox Network with the pre race show beginning at 230 pm eastern time. The race re air will be on Wednesday, March 7th, at 12 pm et on the SPEED Channel.