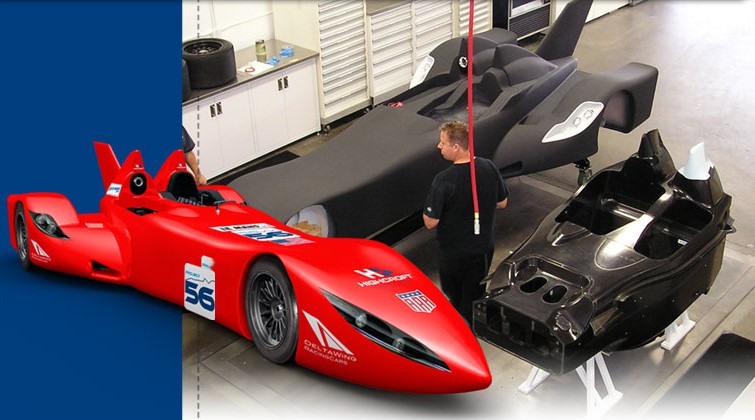 Over the past 46 years Dan Gurney’s All American Racers organization in Santa Ana, California has produced 157 individual racing cars which have won in Formula 1, the Indy 500 plus major international sportscar events.

But for Gurney, the latest machine to come out of his facility has the 80-year-old American racing legend feeling like a kid at Christmas again.

The revolutionary DeltaWing sportscar is being designed and built at Gurney’s facility and will hit the track for the first time later this year with 2-time American Le Mans Series champions, Highcroft Racing

Not only are two race cars being built, the extensive “to do" list also includes two wind tunnel models and a show car.

“When I was growing up as a young boy I used to really look forward to Christmas morning when all the presents would be downstairs under the tree," Gurney said.

“I now feel the same about this project – we’ll need a lot bigger living room and a significantly larger tree!

“It is a great challenge ahead but all of us have ‘been there and done that’ when it comes to building racing cars.

“Now we are well underway on the DeltaWing, everyone has a great sense of anticipation about seeing it run for the first time."

The DeltaWing project was awarded the 56th entry for next year’s 24 Hours of Le Mans – a place on the grid reserved for technologically advanced technologies.

The new car features all the performance of a traditional LMP1-spec sportscar but with half the weight, half the aerodynamic drag and half the horsepower.

“We’re very pleased with the way things have been unfolding and guys can’t wait to get more and more into the project," Gurney said.

“It is a tremendous effort which everyone is very proud of.

“All of us love to lead the pack and this car has a great opportunity to re-shape the industry. That is a great motivating force for everyone.

“Ben (Bowlby) and the other design guys have fitted in exceptionally well with our existing people. There is a lot of trust and confidence already."

The DeltaWing brings together Gurney’s All American Racers group, who will build the new machine; Ben Bowlby and DeltaWing Racing Cars handling the car’s design and engineering; Highcroft Racing to run, test and race and the new machine; and American Le Mans Series founder Don Panoz as a key advisor and as a provider of the unique recyclable REAMS bodywork material.

“The progress so far has actually been far better than I dare hoped," Bowlby said.

“The guys working on the design are doing an outstanding job and everything is coming together exceptionally well.

“The details of the front suspension/nose module are complete and we have been working with the ACO and the FIA on arranging the crash testing for those components.

“The tub itself actually conforms to full LMP1 chassis regulations. From the drivers’ perspective, their “office" will be the same whether driving the DeltaWing or another LMP1 car.

“The rear suspension chassis module is a space frame which cradles the engine and gearbox and supports the suspension itself – its design is also complete and we’re now tooling up to building parts."

Bowlby is enjoying the opportunity to work with Gurney’s organization – a group whose race credits feature 78 total victories, including three Indianapolis 500s, a Formula 1 win, 83 pole positions and eight championships.

“It’s great to be here at AAR, they are an amazing group of racing people," Bowlby said.

“Everyone is so excited about bringing this project to fruition, getting the car on track and surprising the world.

“The level of commitment and ‘get it done’ factor is extraordinary. Dan and Justin (Gurney) have provided an amazing design office for us and they have tremendous manufacturing capabilities here.

“Dan himself comes up to the drawing office to check on progress, to talk about the car and always brings perspective from projects they have done in the past."