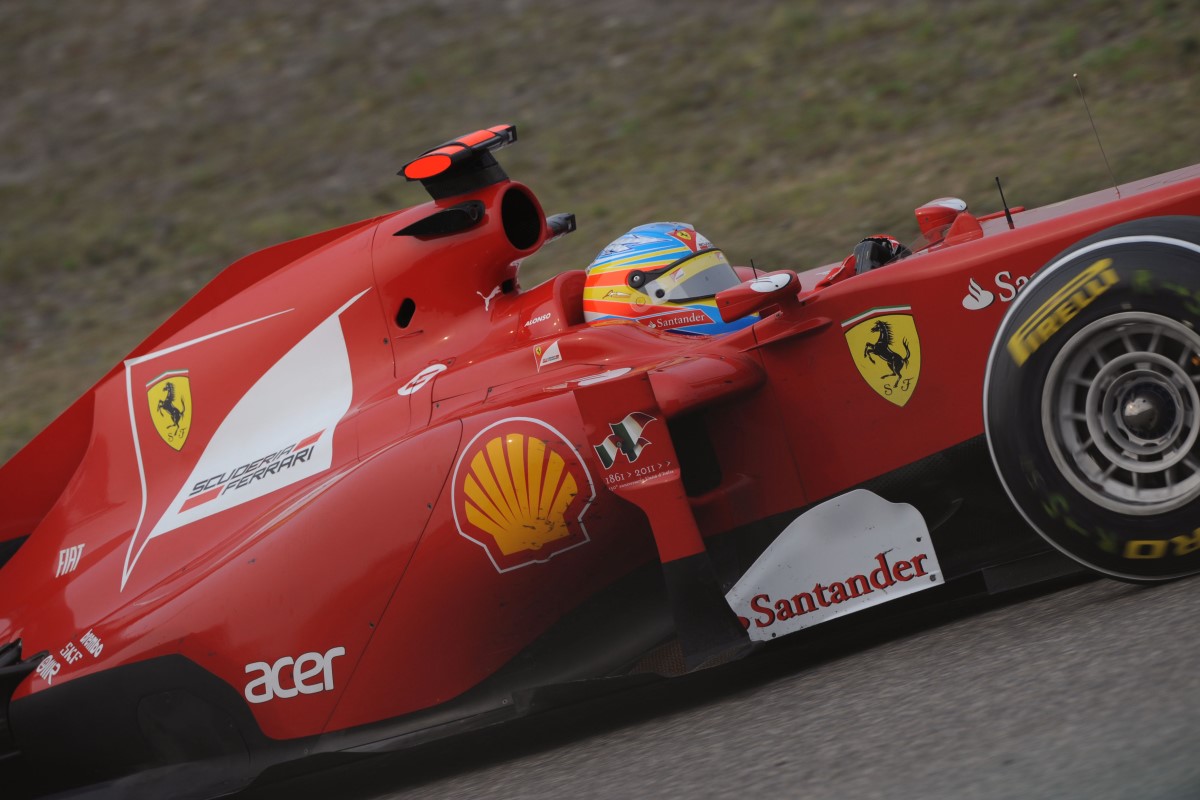 Pirelli ignores Ferrari's call for softer tires
(GMM) Italian tire supplier Pirelli has shown it does not favor Ferrari by deciding to take its hardest compound to Silverstone next week.

Team boss Stefano Domenicali as well as Ferrari driver Felipe Massa had openly admitted they hoped Pirelli would swerve the hardest tire because the Italia 150 car has struggled on it elsewhere this season.

But having originally announced a month ago the hard/soft combination for the British grand prix, Pirelli re-confirmed that decision on Wednesday.

"Silverstone is one of the quickest tracks of the year, requiring the use of the hard tire to cope with the sustained high speeds that are a characteristic of the British circuit," the marque said in a media document.

Said motor sport director Paul Hembery: "We are confirming the decision we took a few weeks ago, after once more consulting all the teams".

Italy's La Gazzetta dello Sport quotes him adding: "Silverstone is a big challenge for us and probably one of the hardest circuits that we face during the year."

Hembery told ANSA news agency: "Ferrari should not be unhappy, as after Barcelona their engineers understood the problems they have had."

Commented Massa's Ferrari teammate Fernando Alonso: "The tire choice is the same for everyone and there's no point discussing if the pair of compounds chosen is more suited to one team or another."

The F1 Commission met recently and decided to scrap the ratified four-cylinder rules for 2013 in favor of a turbocharged V6 formula, to debut in 2014.

"The new power plant will be a V6 1.6 turbo unit with energy recovery systems," confirmed the FIA after a fax vote of the World Motor Sport Council.

A report on F1's official website said the new energy recovery systems, to be known as ERS rather than KERS, "are expected to be more powerful" than the current ones.

"They will ensure overall power outputs remain similar to current levels, despite an anticipated drop in the permitted rev limit," added the report.

Clampdown to cost Red Bull five tenths – Horner
(GMM) Red Bull could lose up to five tenths of a second per lap when the exhaust blowing clampdown takes effect at Silverstone next weekend.

But team boss Christian Horner has thrown a cat amongst the pigeons by saying on Austrian television Servus TV that, until now, the RB7 has only been benefitting from "cold blowing", not the "hot" concept that is so effective when the drivers are off the throttle under braking and in corners.

"In our case, this (effect) happens only with cold-air blowing. Other teams blow hot air and get even more benefit," said the Briton.

If true, Red Bull's key rivals might fall even further away from the pace of the dominant RB7 in Britain and beyond.

"How this affects us compared to the others, we will only see at Silverstone. According to our simulation it's as much as 3 to 5 tenths and perhaps a bit more with some other teams," said Horner.

Former F1 driver Karl Wendlinger said: "I believe Red Bull's superiority will be greater at Silverstone. The (exhaust) system is being banned for all but Adrian Newey is a genius in aerodynamics and this is very important at Silverstone."

But McLaren reserve driver Pedro de la Rosa told EFE news that "nobody has the foggiest idea" how precisely the field will line up in Britain.

"It will have a strong impact and the cars will be slower because of the lost downforce," he said.

"There is a ray of hope, as we all know which car was the pioneer of the technique and have been able to maximize the performance better than anyone else," said the Spaniard, presumably referring to Red Bull.

At least Timo Glock is aware of the effect that the clampdown will have on his struggling Virgin car.

"We have never benefitted from this technology, so for us, everything stays the same," the German told Auto Motor und Sport.

After Montreal, Austrian legend Lauda – now the regular pundit for Germany's RTL coverage – called McLaren's Hamilton "completely mad" and warned that his aggressive driving "will result in someone getting killed".

Lauda subsequently met with team boss Martin Whitmarsh in Valencia and "smoothed things out", according to the German report.

"I'm a fan of Hamilton's," the 62-year-old insists. "I only wish he would sometimes use more of his brain."

Buemi insists 'clearly faster' than Alguersuari
(GMM) Sebastien Buemi has hit back at claims he has become the driver under pressure at Toro Rosso.

Rumors in Valencia had indicated the Swiss' teammate Jaime Alguersuari was most in danger of losing his race seat to Daniel Ricciardo after struggling to match Buemi's pace so far in 2011.

But Spaniard Alguersuari, 21, drove strongly to two consecutive eighth places in Montreal and Valencia, triggering new speculation that it is Buemi whose future is now most in doubt.

"I am working harder and at some point it will pay out," Buemi told the Swiss newspaper.

He insists that although Alguersuari's race results were better in Canada and Valencia, the truth is more complex.

"I was clearly faster than Alguersuari in both qualifyings," said Buemi. "And in Valencia he had another set of tires because he missed the first hurdle in qualifying!" he exclaimed.

"Of course I have to live with it, and what counts in the end is the speed, and I have that," added Buemi.

Council votes to put US GP back on track
(GMM) The 2012 US grand prix is back on the right track after the Austin council signed off the Circuit of the Americas' Texan state funding.

After a vote was delayed last week and a dissenting new member was sworn in, it was feared a negative outcome could sound the project's death knell.

But local reports reveal that the council voted 5-2 in favor of the project receiving $25 million annually in state funding for the next decade.

It seems the next twist in the road will be efforts to move the race's provisional debut date, with the US grand prix currently paired with Canada in hot June next year.

"Mr. Ecclestone has most of the say for when these races are scheduled," said project attorney Richard Suttle, according to the Austin American Statesman.

"If you ask my personal preference," added circuit president Steve Sexton, "I would prefer it be in the fall."

Toro Rosso shifting focus to 2012 car
Scuderia Toro Rosso is currently exceeding personal expectations, with points positions in the last three races having risen the squad formerly known as Minardi to seventh in the Constructors’ Championship. However, the Italian outfit will soon be switching all attention to its 2012 chassis, the STR7.

“We have already played our two major hands in terms of car development while I think the English teams will produce a mighty effort for this race," says Toro Rosso Technical Director Giorgio Ascanelli.

“And when a man with a pistol meets a man with a rifle, the man with the pistol is a dead man! So we need to be very clever to get the most out of our package."

Ascanelli, who developed a clever twin floor idea for his car this year, went on to admit that focus will soon turn to 2012:

“We are approaching that time of year when we must start looking to the new car for 2012. However, there are further developments in the pipeline for the STR6; there will be some very small things at Silverstone and some of the following races. Apart from that, the Italian Grand Prix will see changes to the car simply because Monza is such a unique circuit that we need to dedicate some attention to it. After that, our focus really has to shift to STR7 or we will not have a car for next year."

Reverting to 2011, he admits that Toro Rosso are ahead of their objective, which is to finish eighth overall for Constructors’ honors.

“Currently, we are slightly ahead of our target in terms of our position in the championship," he said. “Whether we stay there depends on how well we work and it also depends a bit on luck, how our closest rivals perform and how much of their resources they can continue to devote to their 2011 cars."

Buemi carried large piece of debris in Valencia
Toro Rosso has praised Sébastien Buemi's drive in the European Grand Prix. The Swiss, who started 17th on the grid, failed to make as much progress as team-mate Jaime Alguersuari and was 13th at the finish, as opposed to the Spaniard’s eighth. However, his pace was hindered by a piece of debris picked up on-track.

“By introducing some significant updates in Valencia, we are probably out of phase with the majority of British teams who will no doubt be having a big push for the race at Silverstone," explains team Technical Director Giorgio Ascanelli. “That had some influence on the fact that Jaime was able to finish so many places higher than he started on Sunday in Valencia.

“Sébastien’s performance was also good, if less apparent, because we have just discovered that he picked up a large piece of debris on his car which caused significant loss of downforce for half the race.

“Nevertheless, he still made up four places by the end of the race, running a three-stop strategy like the majority of cars, whereas Jaime’s result owed something to his two-stop strategy."