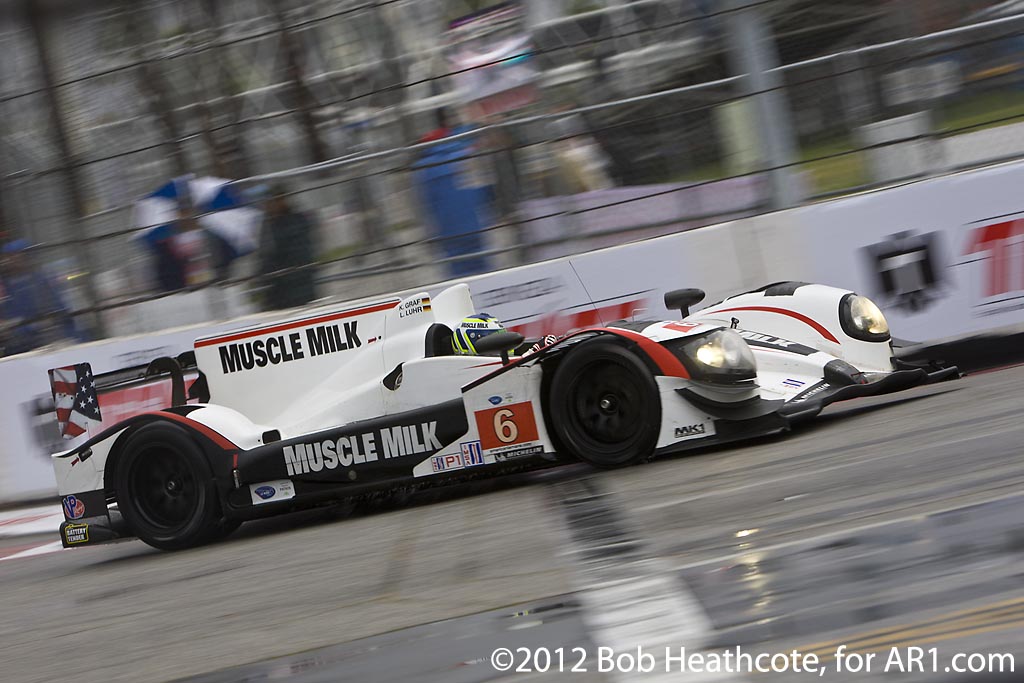 Fuel strategy won out at Long Beach on Saturday with Klaus Graf and Lucas Luhr winning the Tequila PatrÂ¢n American Le Mans Series at Long Beach for the second straight season. The Muscle Milk Honda Performance Development ARX-03a stopped twice during the race’s sole caution period and ran the final 56 minutes without another stop to win over Dyson Racing.

The Graf-Luhr pairing became the first to repeat at Long Beach in the ALMS’ six visits. Graf and Luhr now share the P1 championship lead with Chris Dyson and Guy Smith. The race marked the end of a hectic weekend in which Friday’s qualifying was washed out, and the first time the field saw a dry track came in the race.

“It was a really difficult week. We didn't have any dry times," said Luhr, now a three-time winner at Long Beach. “We are driving a new car so we had no data to use from previous races. We took our best guess, and the engineers and the guys from Michelin did a perfect job. The tire choice was excellent for here. It all worked out well.

The Muscle Milk car lost the lead on its first pit stop when the team suspected the car didn’t get a full fill of E10 – an issue that harkened back to the team’s disastrous closing moments at Sebring when it lost the race due to fueling rig problems.

Saturday’s curse turned out to be a blessing as the quick splash just before the restart ensured the car could get to the end without fueling again.

“It was not the plan for the extra fuel," Graf said. “We did a good driver change and usually by that time we are ready to go, but I'm not sure why it took so long. We weren't sure if we got a full fill, and with one yellow we knew it would be very tight. We just had to be sure we were safe on fuel until the end. I did a number of qualifying laps just to catch up to Chris. Once I was close to him we were side by side going down the front straightaway. I got just ahead of him, kept ahead, and maintained the lead."

“Klaus and I had a chat about Sebring, I think we were almost over it, then we saw a video about Sebring and it all came back to mind," Luhr admitted. “The Sebring is the Super Bowl of Sports Car racing. It still hurts, and at the end of the day you have to get over it. A good team comes back strong and that is what we did today. So hopefully we continue to win races the rest of the year."

Muscle Milk Pickett Racing proved that clean, fast and efficient can coexist by also claiming the Michelin Green X Challenge prototype victory. This was the team’s second consecutive MGXC victory at Long Beach and ninth since the conception of the challenge.

“HPD and Honda have proven to be a reliable and fuel efficient combination," said winning co-driver Klaus Graf. “We feel very strongly that in long-distance races a big part of the race is to go the furthest, fastest and use the least amount of energy. Future rules will change in that direction and we are pleased to partner with HPD to have success both in the race and in the Michelin Green X Challenge."

Milner won for the first time in ALMS and was part of a dynamic opening fight between Corvette and BMW.

“I've had some great podiums and big heartbreaks after chances to win," Milner said. “With an unknown car from the rain sessions, it was great to get a win that meant something. I learned a bit from last year where I had put myself in bad situations so I focused on keeping out of them this year. It's a big team win today."

Following the restart, it didn’t take Gavin long to track down MÃ¼ller in the leading BMW M3 GT. The Englishman felt he had the superior car and with 46 minutes left, finally got the break he needed on the late part of a lap to get around MÃ¼ller and drive away.

“It certainly was a great job from Corvette Racing putting together a great car right off the truck," Gavin said. “I learned a lot from Tommy. He was a bit of a Guinea pig for me today. Seeing how the tires lasted, seeing it through the longer run. It was harder to get ahead of (MÃ¼ller); I finally managed to squeeze through. Then it was about managing and saving the tires. The Michelin tire was great, I was pleased with the performance. It got a bit hairy, with extra traffic, and there were a lot of cars going off. It kept you on your toes. But I had enough gap to stay ahead of the BMW."

Through the Green Racing initiatives in the ALMS, including the Michelin Green X Challenge, oil consumption at the 2012 race at Long Beach was reduced by 38.8 percent compared to the all oil-based fuels used prior to 2005. For the 2012 ALMS season to date the amount of oil savings total 40.6 percent.

Level 5 Motorsports’ Christophe Bouchut took the P2 lead with six minutes left as race-leader Martin Plowman had to pit late. Bouchut and Scott Tucker won in class at Long Beach for the second straight year, this time in a HPD ARX-03b. The duo recovered from an early-race spin after Tucker was hit from behind, and the HPD completed the race on a single stop.

“It could have been a lot worse," Tucker said. “I was able to get the car turned around. It didn't have any damage so I kept it running. The balance came way out, but we were able to stick with it and it eventually worked out for us."

Bouchut ran the majority of his stint in second behind Plowman’s Morgan-Nissan. As was the case with the Muscle Milk entry, the earlier spin may have been a positive situation in the end. Level 5’s engineers told Bouchut to change the on-board fuel mapping to conserve fuel in hopes that the Frenchman would not need to pit again.

“Sometimes you need some (luck) to win, and this was a rich result for us here," Bouchut said. “I knew the (Conquest entry) needed to pit again. After just three laps in my stint, I knew the times I was doing were not very good. I asked two or three times (for his engineers) to repeat (changing the fuel map) because I knew I needed the power. In the end it was great because I finished the race on reserve fuel. I thought I might have run out, but it was perfect."

CORE autosport won its second race of the season and consecutively at Long Beach with Alex Popow and Ryan Dalziel victorious in Prototype Challenge. The CORE ORECA FLM09 was 19 seconds quicker on its lone pit stop than runner-up Muscle Milk Pickett Racing, and that proved key to the outcome.

Dalziel and Memo Gidley dueled in the early part of their stint before the CORE entry pulled away late and won by a lap.

“This was my first race when I moved to the US in 2002, and I bugged CORE to let me race here and help Alex extend his lead in the championship," Dalziel beamed. “The pit stop was a great success. It was difficult staying ahead of Memo. We tried to pace and save fuel. At the end they gave me the green light to extend it and I had a lot of fun putting it through the paces."

Popow led in a rough-and-tumble opening stint that saw some of his closest challengers fall by the wayside via spins or penalties. He had a close call himself with a slower car that allowed Michael Guasch in the Muscle Milk car to take the lead just before the caution.

“It was a little stressful for me first time driving at Long Beach," said Popow, who increased his lead in the team championship. “(Friday) I just did three laps, and I said it would be a big challenge for me starting on pole. But from the first lap I started to pull away and then started to save fuel in the second half of my stint."

In GT Challenge, Green Hornet Racing’s Damien Faulkner drove a strong second stint in a hard-fought battle with Alex Job Racing’s Leh Keen as the Irishman and Peter LeSaffre won in class over Keen and Cooper MacNeil. Faulkner broke away and finished 3.107 seconds ahead of Keen following a tense series of laps following the race restart.

Both drivers took turns posting the fastest race lap for the class in their Porsche 911 GT3 Cup entries until Faulkner gained the upper hand with less than 20 minutes to go.

Like Tucker in P2, LeSaffre had a few dramatic moments in the opening part of the race. He was part of a multi-car pileup on the opening laps that damaged the Porsche’s splitter but had no other damage. The victory was his first in ALMS as well as the first for Green Hornet.

“It was an interesting start," LeSaffre said. “It was kind of tough driving without the splitter, but we just fought and I handed it over to Damien. It was definitely a street fight. I'm excited for the first victory. Hopefully there are a lot more to come."

Saturday’s win was Faulkner’s second in ALMS but first on a street course. The Irishman said his hands felt like they had large blisters after his fight with Keen. He had still more work to do after a relatively long stop under yellow to fix the Porsche’s headlights that were damaged in LeSaffre’s incident.

“[LeSaffre] was unlucky getting into the Lotus," Faulkner said. “Then when I got in, the headlights didn't work. When they came on and the officials released us, I was in fourth. I took my stint to take time picking off car after car after car."

The American Le Mans Series next travels to Mazda Raceway Laguna Seca for the third round of the 10-race championship. The six-hour American Le Mans Monterey presented by PatrÂ¢n is set for 4:30 p.m. ET on Saturday, May 12 from the 2.238-mile circuit in Monterey, Calif. ESPN2 will air the race at 5 p.m. ET on Sunday, May 13. Live coverage is available starting at 4:15 p.m. ET on ESPN3.

Viewers outside the U.S. can watch the Monterey round and all ALMS races live on ALMS.com. The Series’ website offers additional content such as live in-car cameras and timing and scoring for all users around the world.