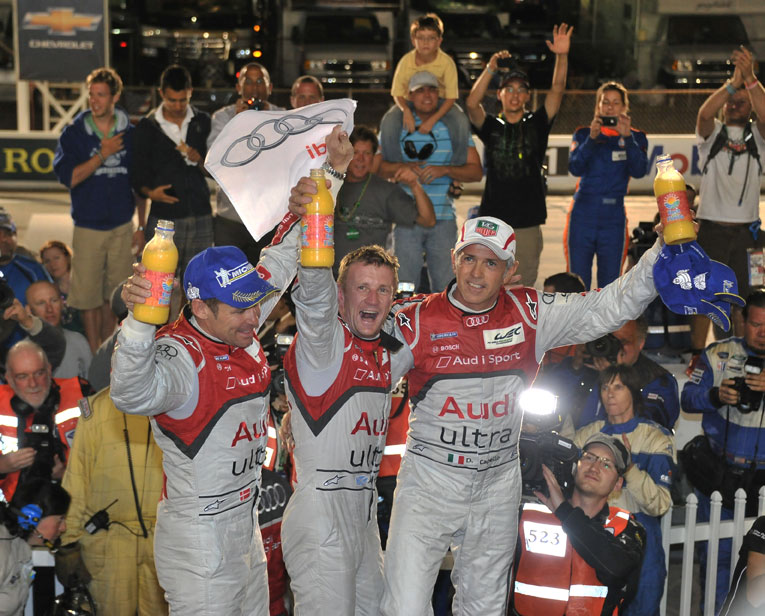 Audi returned to victory at Sebring International Raceway for the first time since 2009 on Saturday with a convincing victory in the 60th Anniversary Mobil 1 Twelve Hours of Sebring Fueled by Fresh from Florida. Dindo Capello, Tom Kristensen and Allan McNish completed 301 laps in their Audi R18 to win by four laps in the opening round of the American Le Mans Series presented by Tequila Patron and the FIA World Endurance Championship.

Audi finished 1-2 at Sebring for the first time since 2005. Kristensen extended his Sebring record with his sixth overall victory. Capello now has won five times and McNish four. The winning trio gained control in the second half of the race as gearbox problems beset the pole-winning No. 1 Audi and the second-place R18 suffered contact with a slower car in the last hour.

"We had some small things to worry about, but the 3 car never crossed our mind," Kristensen said. "We focused more on the keys like keeping the corners right. You have to keep doing this every lap. Lap after lap, you have to make sure that he knows you're there. The key is to look for the rhythm."

Their victory Saturday came within a week of testing the new Lola-Mazda for the first time. On the other end of the spectrum, the Muscle Milk crew was devastated by their final-hour fueling problems. Klaus Graf, Lucas Luhr and Simon Pagenaud were in the running for an overall podium finish for much of the race’s second half in their HPD ARX-03a prototype.

“I was really delighted with the performance the team put in the last couple days," Dyson said. “After just getting the car 12 days ago with a lot of hours put in since then, this was a reward for their efforts. I am excited about what the rest of the year holds. I’m really looking forward to defending the championship now."

Both P1 winners persevered through a race that started 62 cars and had 51 running at the end. It made the race more about patience and opportunity – and some good fortune.

“Every lap, every corner, you had to be focused to not make a mistake or make a stupid maneuver," Audi’s Capello said. “We were careful, we finished with just little scratches on our car; nothing serious. It was one of the keys to our success today."

Joey Hand won GT for BMW Team RLL after a wild last two laps that ended with the team’s second straight Sebring victory with the BMW M3 GT. It was a frantic race for much of the second half with six cars in position for the lead. Hand, who battled the last three laps with AF Corse’s Olivier Beretta, appeared to lose the lead on the final lap when he was forced off course by Gimmi Bruni in an AF Corse Ferrari F458 Italia.

Hand went off track but never stopped or lost the lead thanks to a remarkable recovery.

“We talked about this – what we had to do for this race," Hand said. We knew we didn’t have the ultimate lap. We knew we had the smartest guys – starting with Bobby Rahal – then BMW, Dunlop, a lot of great people. We had four or five issues that could have taken us laps down."

“This wasn’t GT; this was touring car," said Mueller, who won the class championship with Hand last season. “We were flat out like a sprint the whole time. The win was really fantastic. Joey mentioned everybody; it's not a driver's job. It’s a team sport. Where we are now with the team is really special."

Corvette Racing’s trio of Jan Magnussen, Antonio Garcia and Jordan Taylor also got around Beretta at the finish and ended 6.3 seconds behind the BMW. Beretta, Andrea Bertolini and Marco Cioci placed third in their Ferrari F458 Italia.

“(Hand) wants to win, we want to win and that was just racing," Beretta said. “He was on the outside line and there is not as much grip especially on the last lap of the race. It was just the racing circumstances."

It was a successful opening round in Level 5’s title defense of the ALMS P2 championship. Barbosa, Christophe Bouchut and Scott Tucker were the highest-finishing ALMS team in the class and overall standings.

“It was a good battle with the WEC car even though it is not a championship we are in," said Tucker, who won the P2 title last year with Bouchut. “Overall my teammates did great today and we are really pleased with them. That is something we worked really hard on in the offseason and we are really pleased with all the developments in the class. We think there can be four to six cars in P2 and make it a really competitive class in ALMS."

It was a remarkable comeback for the Level 5 team after a huge crash in qualifying Friday that left Bouchut in the outside tire wall at Turn 1. The team began the race from the rear of the field after changing tires.

“We have a great team with really hard workers," Barbosa said. “I was 100 percent confident that we were going to have good car and we had no issues. We just had to get the car going, and it was perfect from that point."

Black Swan Racing placed second among the ALMS runners in class in its first P2 race since moving up from GT Challenge. Tim Pappas, Bret Curtis and Jon Fogarty completed 298 laps in their HPD-powered Lola B11/80 coupe.

They were ahead of Conquest Endurance, which finished third among the ALMS P2 finishers in the team’s first race with the Series. Martin Plowman, Jan Haylen and David Heinemeier Hansson drove their Morgan-Judd.

The 60th Anniversary Mobil 1 Twelve Hours of Sebring Fueled by Fresh from Florida also marked the start of the fourth season of the Michelin Green X Challenge.

Defending 2011 MGXC champions BMW Team RLL captured the first win of the season in the GT class edging out No. 4 Corvette Racing.

The event saw an unprecedented starting grid with 62 cars from the American Le Mans Series presented by Tequila PatrÂ¢n and the FIA World Endurance Championship. All cars competed on one of four alternative fuels – clean diesel, E85, E10 and isobutanol.

CORE autosport opened the defense of its Prototype Challenge championship with the team’s first victory at Sebring. E.J. Viso, Alex Popow and Burt Frisselle drove their ORECA FLM09 to a one-lap victory over PR1/Mathiasen Motorsports.

Butch Leitzinger, Rudy Junco and Ken Dobson finished second in another class fight that went down to the final hour. CORE’s sister car also took third on the class podium with the trio of Colin Braun, Jon Bennett and Eric Lux.

“Sebring is a place that is very special to have the opportunity to come here and drive," Frisselle said. “Thirty-five years ago my father won this race and it is very special for me. The traffic was intense and without the brilliant driving and hard work from my teammates and CORE autosport, I would not be sitting here. I am proud I got to take part in Sebring history."

Viso drove the final 2:15 and rarely had a lead of over a minute. It was an amazing result for a team with two drivers – Viso and Popow – who had never driven the car before this week. Frisselle had only driven the ORECA once – a victory at Petit Le Mans in 2010 with Level 5.

“We were told when we got here Sunday that we think we have a chance for the championship," Popow said. “And it is here; we did it. We got first place. The team did a professional job and we just drove hard all day."

Alex Job Racing won in GT Challenge at Sebring for the second time in three years. Bill Sweedler, Townsend Bell and Dion von Moltke outlasted the field for a one-lap victory over the team car of Cooper MacNeil, Leh Keen and J.P. Dumoulin.

The winning Alex Job car recovered from a couple of early-race issues that resulted in damaged tires and a spin after von Moltke was hit at the final turn in the 10th hour. After that, however, von Moltke drove a steady and clean race as other challengers fell by the wayside in the race’s second half.

“I had to push the last two hours and was able to get a gap, make the last stop and bring it home for the win," said von Moltke. “The car ran flawless all day. The crew put a great car under us, and we delivered."

AJR won at Sebring for the eighth time. The next round in Long Beach marks the start of a new chapter in the team’s history as Sweedler and Bell debut a Lotus Evora GTE in the Series’ GT class.

“What a way to go out. It is just unbelievable," Sweedler said. “Dion is spectacular and Townsend did a great job. The team put together an awesome car and what a day! It couldn’t have gone better."

In GTE Am, Team Felbermayr-Proton’s Christian Ried, Gianluca Roda and Paolo Ruberti won by a lap in their Porsche 911 GT3 RSR. The Felbermayr team placed second in the class last year at Sebring.

This time they finished ahead of Larbre Competition’s Corvette of Christophe Bourret, Pascal Gibon and Jean-Phillippe Belloc.

“We had a bit of trouble in the last hour," Ruberti said. “I did the last stint without the power steering but kept the car on good pace with good results. The Ferrari is a little faster than us, but we were in fact in the best position. In this place we need to now finish all the races for a good championship result."

The 12 Hours of Sebring airs on ABC at noon ET (3 p.m. PT) on Sunday, March 18. The full 12-hour program will be archived on ESPN3.com for three weeks and on ALMS.com for on-demand viewing.

The next round for the ALMS is the Tequila PatrÂ¢n American Le Mans Series at Long Beach on Saturday, April 14. The race will start at 7:30 p.m. ET with live coverage on ESPN2. The second round of the championship also will be shown live on ESPN3 in the United States.

The race is available to international audiences on MotorsTV in Europe, Fox Latin America, ESPN International, Fox Mideast and on ALMS.com.