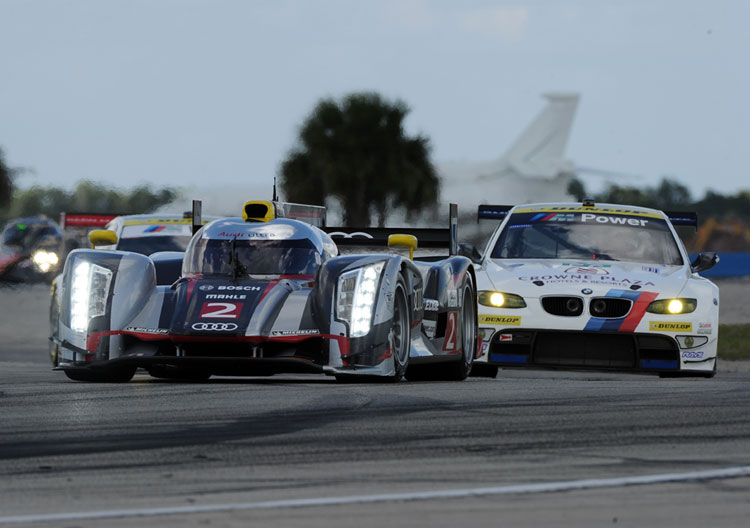 Tom Kristensen’s Audi R18 was the only one of the three diesel-powered factory prototypes to emerge unscathed from a hectic nighttime practice session Thursday at Sebring International Raceway. The Dane made his fortunes count with the fastest time on the evening – a 1:47.049 in the Audi R18 that he will share with Allan McNish and Dindo Capello in Saturday’s 60th Anniversary Mobil 1 Twelve Hours of Sebring Fueled by Fresh from Florida.

The riveting night practice ended a day that saw a different Audi lead each of the three practice sessions in the run-up to the American Le Mans Series presented by Tequila PatrÂ¢n and the FIA World Endurance Championship season-openers.

Kristensen was just 0.328 seconds clear of Andre Lotterer in the sister car at the end of the session that was extended 20 minutes due to multiple red-flag periods.

There was a bit of drama in the Audi camp a little more than midway through the session. Duval ran into the back of Nick Heidfeld’s Rebellion Racing Lola-Toyota after Heidfeld had to stop in order to avoid NGT Motorsport’s spinning Porsche 911 GT3 Cup. Loic Duval couldn’t get his car restarted and was hit from behind by Marcel Fassler – Lotterer’s teammate – in a second Audi.

Fassler’s car appeared to sustain the brunt of the impact with damage to the front end but was able to return. Duval wasn’t as lucky as his car didn’t turn another lap. It still held the third-fastest lap thanks to Duval’s time of 1:48.752.

Stephane Sarrazin posted the fastest P2 time on his second-to-last lap with a 1:51.824 in Starworks Motorsports’ HPD ARX-03b. The Frenchman was a second quicker than Oak Racing’s Olivier Pla in his Morgan-Judd with Ryan Hunter-Reay another 0.32 seconds back in the first of Level 5 Motorsports’ HPD prototypes.

Joey Hand put BMW Team RLL on top in GT for the first time this week with a lap of 2:00.258. Hand and Dirk Mueller were part of the BMW’s class win in last year’s race, and the American led AF Corse’s Gimmi Bruni by 0.065 seconds Thursday night.

Corvette Racing’s Jan Magnussen sat third in class with a lap of 2:00.415 in his Corvette C6.R. The top four cars were within 0.17 seconds.

Raphael Matos went fasted in Prototype Challenge for Performance Tech Motorsports with a lap of 1:56.789. His time in the Performance Tech ORECA FLM09 put him 0.127 seconds quicker than Pablo Sanchez in the first of two Merchant Services Racing entries.

Dane Cameron was third-quickest for Dempsey Racing at 1:57.113.

Dominik Farnbacher set the fastest lap in GTE Am for Luxury Racing, the second time he did so on the day. His Ferrari F458 Italia turned a lap of 2:01.864 and put him 0.524 seconds ahead of Krohn Racing’s Nic Jonsson, also in a Ferrari.

TRG’s Spencer Pumpelly turned in the best GT Challenge lap on his final time around the circuit with a 2:07.623 in the team’s Porsche 911 GT3 Cup. It was just enough to top Green Racing Hornet’s Sebastiaan Bleekemolen by 0.054 seconds.

The final practice session at Sebring is set for 9:55 a.m. ET. Qualifying will start at 3:20 p.m. ET and will be streamed live on ESPN3 in the United States and on alms.com outside the U.S.

Tom Kristensen, Audi Sport Team Joest
No. 2 Audi R18 (P1)
“Everyone has prepared hard as you can see with the turnout and more than 60 cars. You can call it action-packed or you can call it a nightmare. It is really difficult to find your way around here with that many cars. It’s a big challenge to run competitive lap times with that traffic. In the night practice, everything didn’t go completely smooth for all of us at Audi. With these type of cars, we have bad visibility and our sister cars No. 1 and No. 3 had contact with the Rebellion car at Turn 7. It is tough to see through there. So it was bad luck for one of them who couldn’t get out again. Generally we are pretty happy and we were fastest in the night. It is a tough race and you need to be spot-on. It looks like the other cars in the P1 class can go further on their fuel than we can. So that could be a strategic advantage for them in the race."

Luis Diaz, Level 5 Motorsports
HPD ARX-03b (P2)
“Ryan and I were about the same in speed tonight. We are happy with the performance of the car and the team. But it is going to be a very busy race for us for us and the many cars and traffic. The race will be physically challenging but tough mentally too. Because you have to be aware of everything around you with just so many cars. Things are happening already on the track. I saw three or four times that cars are getting together and it is only Thursday. Could somebody tell them that the race is on Saturday, please? This is a 12-hour race. We need to stay on the lead lap for the first eight hours, then we need to press for the first eight hours, then we push hard for the finish. We can’t get too aggressive too early in the race. But I think we can win it."

Andy Lally, Flying Lizard Motorsports
No. 44 Porsche 911 GT3 RSR (GT)
“It’s been a pretty productive week so far with us here at Flying Lizard. We’re still sorting out a couple of little new car issues but a lot of it is just getting myself, Seth (Neiman) and Darren (Law) all on the same page and working together. We’re liking the changes we’ve made since yesterday. So far, so good. I like the car. It’s my first time ever driving an RSR after all of these years. It’s going in the right direction and I think it will be decent for the race."

Bryan Sellers, Team Falken Tire
Porsche 911 GT3 RSR (GT)
“So far things are going OK. We have had some problems through the week trying to get the balance right but I feel like we have constantly been gaining ground. It’s a new car and a new tire for us so it’s always going to be a little bit of a struggle to get a hold of everything. We’re making progress and this is the best the Falken Porsche has been to-date. We still have some room to improve but we’re better than we were a few days ago."

The 2012 American Le Mans Series presented by Tequila PatrÂ¢n begins with the 60th Anniversary Mobil 1 Twelve Hours of Sebring Fueled by Fresh from Florida on Saturday on March 17. The race, set for 10:30 a.m. ET, will be broadcast at noon March 18 on ABC and shown live on ESPN3.