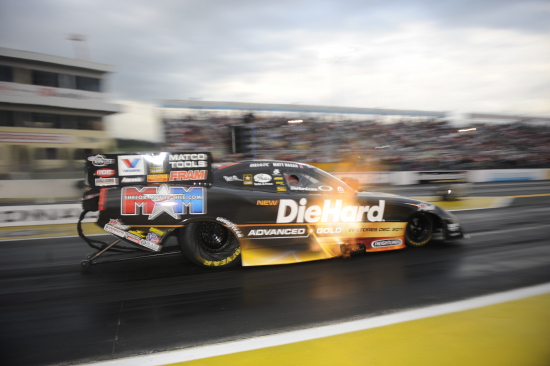 With the possibility of rain in the forecast threatening to wash out all of Saturdays qualifying sessions, teams went all out during Friday’s session to try and lock themselves into the field for Sunday’s money rounds. The extra effort combined with cool track temperatures resulted in record-breaking runs across the board.

Following up his record-setting performance two weeks ago at zMax Dragway in Concord, N.C., Hagan clicked off a 4.012 second pass at 316.67 mph in the days final session to take the provisional pole, knocking teammate Johnny Gray from the top of the ladder and moving into a tie with points leader Mike Neff.

“This is phenomenal," Hagan said. “We have a long ways to go to catch up to 'Superman' (Mike Neff) with Cruz (Pedregon) and all the other guys knocking on the door, so we're going to keep our fingers and toes crossed and stay at it.

“This is a great race track. When I'm sitting in the race car in cool, dark conditions, it runs good most of the time. Tommy (DeLago, crew chief) has a good handle on the tune-up. We're having fun. You probably can't tell while the car's running, but I have a big ol' smile underneath my helmet."

Gray made a strong comeback in the second session, jumping from 13th to first with a run of 4.023 at 318.24 mph to break the track speed record. Gray nearly had his first career Funny Car no. 1 qualifier locked up until Hagan re-claimed the top spot in the final pairing of the session, settling for the second qualifying spot.

Antron Brown was busy re-writing the record books as well in Top Fuel qualifying, taking the no. 1 spot with a run of 3.797 at a track record 324.44 mph to jump from third to first and bump teammate Spencer Massey from the top spot.

“Actually hats off to my guys, the first run was really good. We went the wrong way on second one but the first was good," Edwards said. “We had a good first day, we’ll see what happens tomorrow. I’m not racing the Summit guys, I’m racing whole field. The fact that we all ran the same just means there’s a lot of hard work going on. Teams are doing all they can do to go fast."

Pro Stock Motorcycle points leader Eddie Krawiec stomped the field in the opening round, killing the track ET and speed records with an impressive 6.826 at 197.97 mph.

“I’m excited, all I have to do here is make good clean laps down the track and we’ll be good," Krawiec said. “We left a little on the plate tonight, but it’s about making clean, good, consistent runs and showing the competitors what we’re all about."