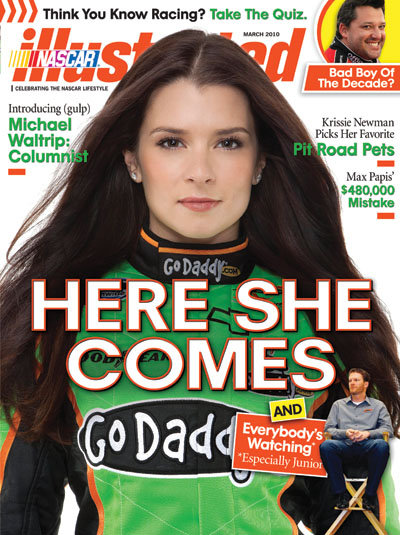 UPDATE #3 When NASCAR sponsor Go Daddy recently hired an outside agency to create its Super Bowl commercials for next year, it raised speculation that NASCAR star Danica Patrick would no longer star in those ads.

Not so, Go Daddy founder Bob Parsons said Thursday. During a press conference to announce a charitable program to help injured veterans, Parsons said that Patrick will appear in both of Go Daddy’s 30-second Super Bowl commercials in February. Patrick, the most successful female driver in IndyCar history, has appeared in more Super Bowl commercials (10) than any other celebrity.

Parsons said next year would mark the ninth straight year that Patrick will appear in Go Daddy’s Super Bowl commercials.

Go Daddy sponsored Patrick in the IndyCar Series and followed her to NASCAR three years ago. It sponsored her full-time Nationwide Series team this year at JR Motorsports and will follow her to the Sprint Cup Series with Stewart-Haas Racing next year.

The company’s recent hiring of an outside ad agency, however, and the move to a new, more conservative ad campaign raised speculation that Go Daddy might be distancing itself from Patrick and phasing her out of its popular commercials.

“Go Daddy and Danica are a team and we’ve been a team for a long time," he said. “It would be difficult to figure out who has benefited the most from our relationship. I would think Go Daddy would have a little more.

“It’s been a true partnership, and I don’t see that ending any time soon." Sporting News

10/18/12 Danica Patrick is still Go Daddy's girl, though she may not be featured in the company's Super Bowl spots for the first time since 2007.

Go Daddy on Thursday announced it had signed New York agency Deutsch Inc. to produce its two 30-second Super Bowl spots, the first time the website domain provider has gone outside for the ads it has done itself since 2005.

Go Daddy also went outside for the first time in company history when it used Deutsch on an ad campaign that debuted during the Olympics.

"We got some good data concepts for the Olympics beyond what is on air now, and we wanted to expand our relationship," Barb Rechterman, chief marketing officer, told The Associated Press on Thursday.

But the hiring of Deutsch has created speculation that Go Daddy is trying to cut down on its use of Patrick, who has been featured in the Super Bowl spots since partnering with the company in 2007. Patrick's 10 Super Bowl ads are more than any other celebrity, and she's done 22 commercials for Go Daddy since 2007.

"We love Danica, our relationship is perfectly fine," Rechterman said. "Danica, for us, is a valued asset and we have her for the foreseeable future. We are very excited for her upcoming first full season in the Sprint Cup Series, and Go Daddy is looking forward to many more years together with her."

10/18/12 A reader writes, Dear AR1.com, It looks like it is time for NASCAR to give Danica 'The Call'. How soon before she wins the pole and/or a race? Mordichai Rosen, Los Angeles, CA

The advertising future of Go Daddy's go-to girl appears to be in limbo as Go Daddy is about to announce the hiring of a new ad agency, Deutsch NY, which will have freedom to drop the sexy racing star from the Web domain company's Super Bowl ad lineup.

Patrick, 30, has starred in more Super Bowl spots – 10 – than any other celebrity, including Michael Jordan and Cindy Crawford. Overall, she's appeared in 22 Go Daddy commercials since 2007 and is believed to earn upwards of $1 million annually for those commercial efforts. But Patrick has not appeared in a Go Daddy spot for months, and the company says it has no current plans to feature her in any spots at least through January.

"The question at hand is: Is she in the Super Bowl or not?" says Barb Rechterman, chief marketing officer at Go Daddy. "What we're trying to do is redefine sexy to be a small-business owner running a successful business. So we want to explore options of how we make our advertising new." Go Daddy also has had recent management shakeups, and its sky-high growth rate has come down to earth.

At issue: When to unhitch from a possibly falling star? This is what every company must decide that's been lucky enough to enjoy a good run with a celebrity spokesperson. There's no simple answer.

The new agency's CEO, whose Los Angeles office created much-celebrated Super Bowl ads for Volkswagen, says while Patrick has been good for the Go Daddy brand, she's not a necessity. "We've done terrific spots without Danica," says Val DiFebo, CEO of Deutsch NY. She was referring to two Go Daddy ads that ran during the Summer Games and three others that were recently filmed.

Patrick, whose contract with Go Daddy runs through 2013, was unavailable for comment Wednesday. She was in Kansas City training for the NASCAR Sprint Cup Series. But in a statement provided by Go Daddy, she said, "I absolutely hope I am in the new Go Daddy Super Bowl commercials. I don't think it would feel quite like a Super Bowl if we don't do the commercials again this year."

But Patrick's Q Score, which tracks likability, has recently been heading south, falling from 29 in 2010 to 19 in 2012. The average race car driver rates a 13 Q Score. "It raises a warning signal to evaluate the strength of her emotional connection with consumers," says Henry Schafer, executive vice president at The Q Scores Co.

The fact that a new agency has been asked to review Patrick's Super Bowl future raises red flags, says Kate Newlin, a brand strategist. "It was a relationship that worked for both parties for a long time, but they didn't say, 'till death do us part,' " says Newlin. "If Go Daddy is feeling inhibited about where it can go with her, it has to sign the divorce papers." Indy Star