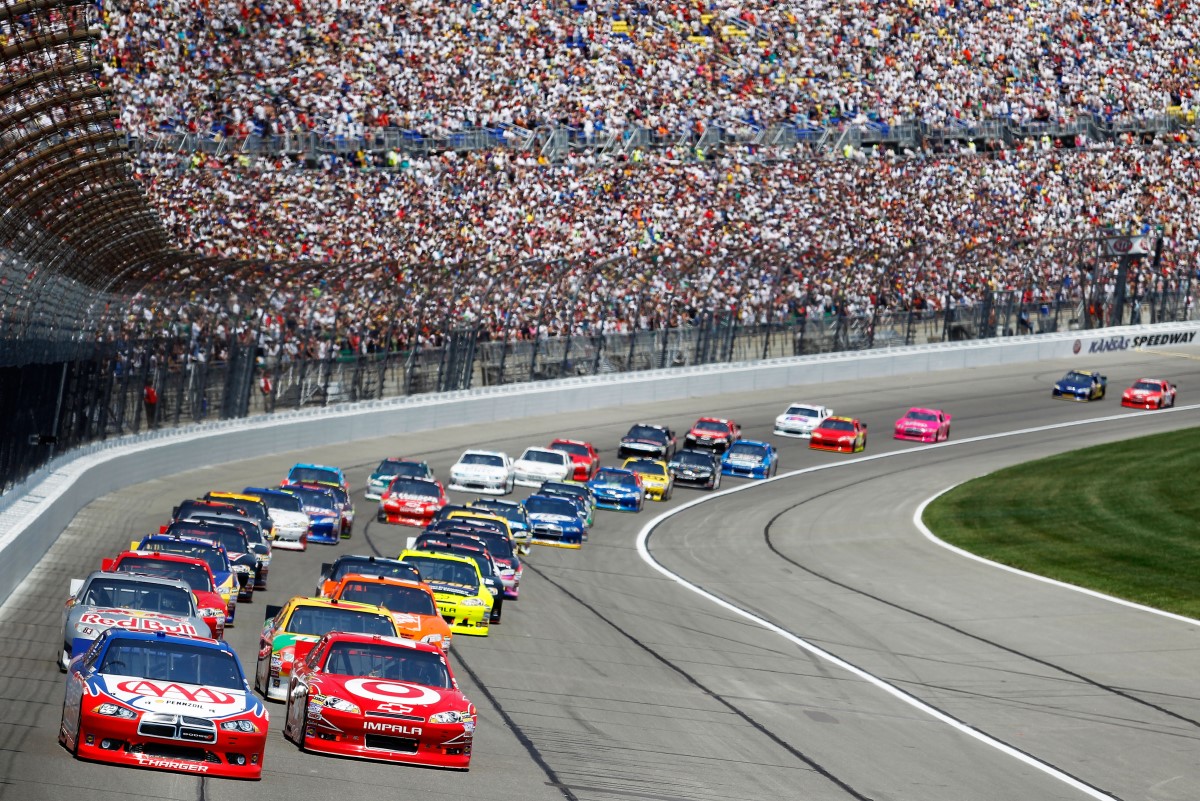 Over the previous weekend we watched a driver win a NASCAR Sprint Cup race by using his left foot instead of his right foot. We watched NASCAR's most popular driver not win a race because of fuel issues. We watched a NASCAR Nationwide Series driver coast under the checkers, at 50 MPH, because he was out of fuel. Oh by the way, all of this was completely overshadowed by a fist fight that very few people actually saw. With those thoughts in mind, let's begin with:

THUMBS-UP to Keselowski for using his left foot, to push in the clutch and coast into the turns, while removing his right foot from the gas pedal. That action was guaranteed factor in having just enough fuel to make it to victory lane.

THUMBS-UP to Penske driver Kurt Busch for actually being happy after the race despite a dominant performance that turned into a ninth place finish due to fuel issues. It's no secret that Busch has been unhappy with the performance levels of his Penske Racing Dodge. We've heard about it during garage interviews and we've really heard it via in car radio transmissions.

Busch led 152 of 267 laps and clearly was the car to beat. But fuel issues forced a pit stop with ten laps to go. That was compounded by an additional loss of track position after the car momentarily stalled on pit road when the gas didn't make it to the fuel pick up in the tank. None the less, this team show strength at a time when it was really needed and that translates into momentum heading to next weekend.

On the topic of Penske performance, THUMBS-UP to Keselowski for a great line, during a post race interview, when he said "we had a come to Jesus meeting." He was of course referring to Roger Penske who basically told his two race teams that it was time to stop whining, get to work and fix things.

WHAT's-UP with the politically correct faction of America who are going to totally freak out at the reference comparing Roger Penske to Jesus.

THUMBS-UP to Dale Earnhardt Jr for using fuel mileage as an advantage to finish second at Kansas. Earnhardt turn four spin out changed his pit sequence status and allowed him to finish the race on one stop when most everyone was going to need two stops.

With less than ten laps remaining, Earnhardt was charging towards the leader, and looking like a race winner, when all of a sudden he received the command, from crew chief Steve Letarte, to back off his speed and save fuel. THUMBS-UP to Letarte for making that call. It resulted in a second place finish which elevated the team to third in points and only one point away from second.

WHAT's-UP with the cardio systems of Earnhardt's fan club, aka The Junior Nation, getting stressed to the limit over their coming so close to a win only to come up short over fuel issues? This is the second Sunday in a row their hopes have been dashed

THUMBS-UP to Justin Allgaier for a highly unusual win in Saturday's STP 300 NASCAR Nationwide Series race at the Chicagoland Speedway. Carl Edwards was set to win this race but, with the checkers one half lap away, his car wiggled and ran out of fuel. Allgaier passed him and raced for approximately 100 feet before his out of fuel engine began to sputter. The two cars coasted under the checkers, at approximately 50 MPH, for the one-two finish.

THUMBS-UP to the return of Trevor Bayne to NASCAR racing after being sidelined for six weeks due to an illness that still hasn't been officially diagnosed. Bayne proved that he was more than ready to climb back into his race car with a third place finish. He had the fuel to make it to the end of the race and was charging hard to close the gap to steal the win. Due to the extreme heat, Bayne's crew installed some extra air hoses inside of his car which motivated the driver to quip "I feel like an astronaut."

THUMBS-UP to Danica Patrick for her ten place finish. After a nine week absence, to cover her Indy Racing League commitments, Danica drove a smooth race and fortified rumors that she may indeed be coming to NASCAR full time next year.

WHAT's-UP with the brutal Midwest heat last weekend? There were fans lying on the concrete floor underneath the Kansas Speedway grandstands trying to get some relief. The interior temperature of the race cars hit well over 140 degrees and many of those drivers looked beat.

Meanwhile here in southern California, we drew daytime highs of 63 degrees and, once the sun went down, we all went looking for our heavy jackets. Is the Midwest where global warming is located? WHAT's-UP with new theories from the global warmers that won't make anymore sense than the previous theories?

Okay let's get to it: the one item we're all going to be talking about this week.

The opinions of the fight between NASCAR team owner Richard Childress and driver Kurt Busch, last Saturday at the Kansas Speedway, seemed to be split down the middle between THUMBS-UPS and WHAT's-UPS. The differential here seems to be determined on how one feels about Kyle Busch. It also seems that everyone respects Richard Childress despite his surprising behavior last weekend.

This all started during the NASCAR Truck race when Busch reportedly didn't care for the way Childress driver Joey Coulter passed him to take fifth place away on the final lap. During the cool down lap Busch responded with a door slap on Coulter's passenger door. This action angered Childress but it wasn't the only reason. The team owner was still mad at Busch for damages that occurred when he pushed Kevin Harvick's car nose first into the pit wall at Darlington after the race was over. Following that incident Childress allegedly informed Busch to take his problems up directly with his drivers like a man and quit tearing up his race cars after the race is over. It now appears that Busch decided to ignore that warning

First off, WHAT's-UP with calling that a fight? Childress placed Busch in a bear like headlock and did a smack down on him. It was over as quick as it started.

THUMBS-UP to Childress for having the wisdom to remove what I'm sure is a very expensive wrist watch before the beat down started.

Apparently NASCAR officials decided to declare the Kansas matter a WHAT's-UP. On Monday they fined Childress $150,000 and placed him on probation until the end of the year.

WHAT's-UP with the monetary fine being so high? Apparently the "have at it boys" policy doesn't apply to team owners. When Jeff Gordon and Jeff Burton slugged it out on the backstretch of the Texas Motor Speedway, during a yellow flag, there were no fines, no probations and it was also filed under "have at it boys". In fact most of us are still laughing at that lame display of fighting.

THUMBS-UP to Richard Childress for manning up, accepting the fine and probation while taking full responsibility for his actions.

I'm sure NASCAR officials are quietly whispering THUMBS-UP for the fact that no TV cameras, or still photographers, were at the scene to record this moment for posterity. It seems this action happened so fast the camera people couldn't mobilize in time to get there.

WHAT's-UP with no TV cameras at the scene? Not a single one of you can tell me you wouldn't want to see that fight.

Kyle Busch and Joe Gibbs Racing only issued blanket statements that basically said they were going to let NASCAR handle the matter. THUMBS-UP to "Twitter" the land where you can always find a comment on anything. Here are some examples from a few of NASCAR's favorite personalities:

Kyle Petty wrote "I think RC needs to auction the watch he took off before he gave KB the beat down." Petty followed that up with another "tweet" that read: My Grandfather, (Hall Of Fame member Lee Petty), once told me you can't out guess a crazy man."

Fan favorite Kenny Wallace wrote: "I guess boys have at it is over, now that's an expensive punch." Later Wallace admitted to a fight fantasy when he wrote: "I would love to fight another driver, but after the $150 thousand fine on RCR I can't afford to."

Upon hearing about the incident Fox Sports analyst Darrell Waltrip wrote: "(the) buzz is that RC whipped up on Kyle Busch. The leader of the junk yard dogs will adjust your attitude for you." In a second message DW wrote: "ever wonder where that Childress bunch gets their attitude? Look no further than the man whose name is on the team. Don't ask me how I know."

One of the better "tweets" came from Austin Dillon, who drives in the NASCAR Camping World Truck Series for his Grandpa Richard Childress. Dillon wrote: " I wonder if Pop Pop will get a senior discount on his fine?"