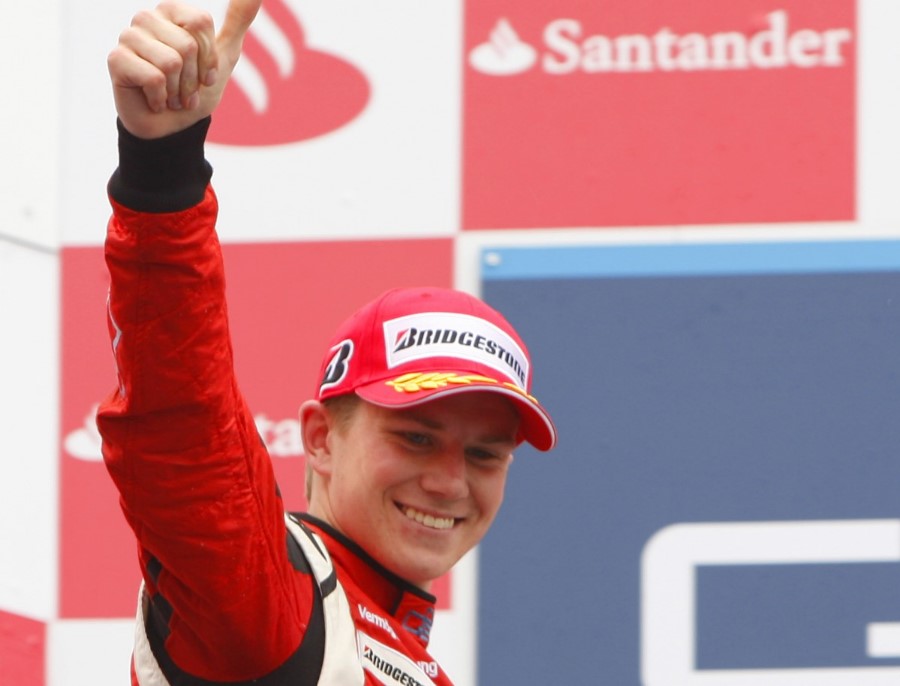 Nico HÃ¼lkenberg became the second man to build a perfect weekend when he added the race two victory and fastest lap to yesterday's collection and his earlier pole with a crushing display in wet conditions this morning at the Nurburgring, easily winning ahead of Alvaro Parente and Kamui Kobayashi. The German was the first driver since Nelson Piquet in 2006 to claim all 20 points on offer over a race weekend, and took the lead in the driver's championship for good measure.

He kept his head at the start while all around him was chaos: with poleman Sergio Perez slow off the line Vitaly Petrov went right but struck the front left of Lucas di Grassi, who then ran into the back of Perez at turn one to hand the lead to the Russian ahead of Kobayashi, Parente and HÃ¼lkenberg, the latter having to dispose of Javier Villa at the chicane for the position.

With the Russian sailing away in front HÃ¼lkenberg clinically disposed of the two cars between them over the next two laps and was soon swapping fastest laps with the leader, while further back championship rival Romain Grosjean made a storming start and was seeming unable to stop overtaking his rivals: starting in 22nd he sliced through the field to 7th behind JérÃ´me d'Ambrosio by lap 8, with the pair immediately commencing a battle that looked set to run and run.

HÃ¼lkenberg was closing in when Petrov was given the bad news that he been handed a drive through penalty for his collision at the start, forcing him to come in on lap 14 and handing the lead to his rival: so strong was their pace that he emerged in 4th, and was soon in the middle of a fierce Kobayashi/Parente battle.

With open warfare all around the track HÃ¼lkenberg sailed serenely on, strolling across the line 26.4 seconds ahead of Parente, who eventually subdued Kobayashi to claim his first podium of the season, while Petrov recovered from a spin to finish 0.1 seconds behind the Japanese driver. Behind them Grosjean eventually hauled his way up to fifth place ahead of Villa and d'Ambrosio to scrap a few points out a disappointing weekend for the Frenchman, who lost his championship lead to HÃ¼lkenberg on 46 points but managed to cling on to second ahead of his teammate by a point, 42 points to 41.