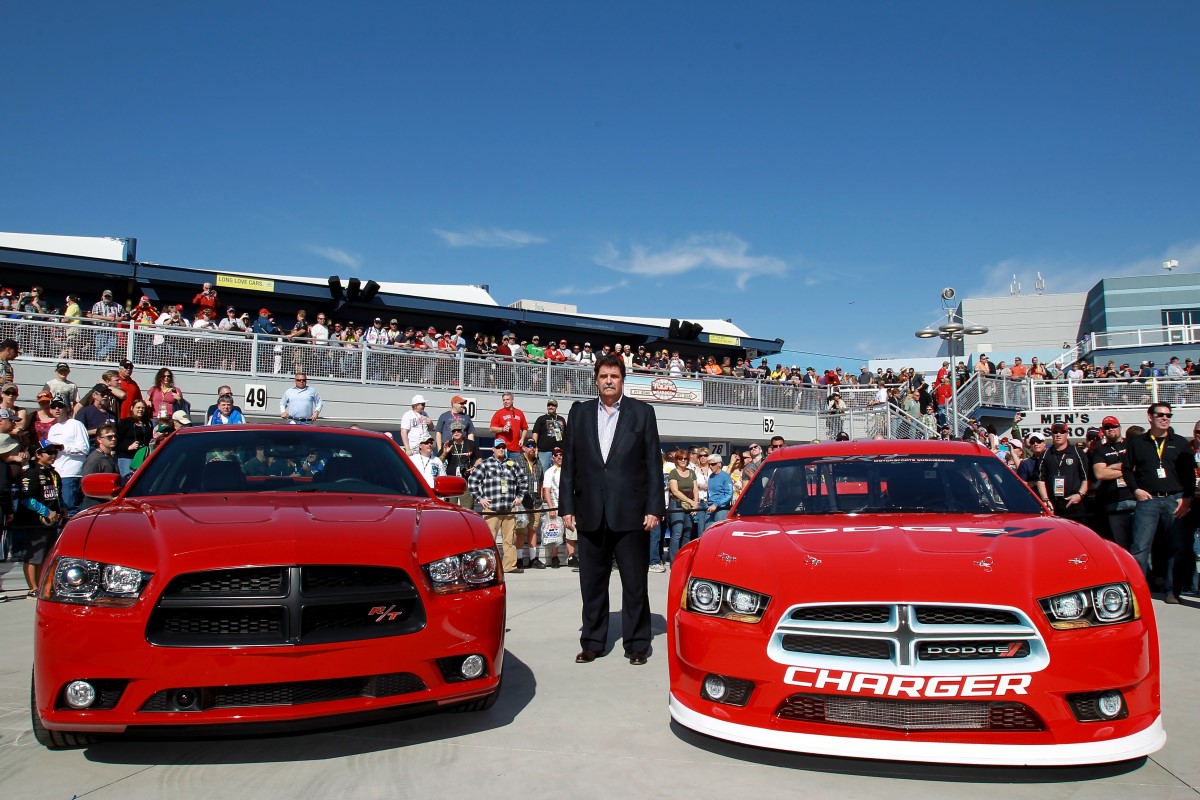 UPDATE #6 IndyCar's Will Phillips said on Saturday at Indy that INDYCAR is speaking to another engine manufacturer, who could join the competition in 2014. No word on who would design the engine but speculation is that it would be Cosworth for either Dodge or Ford.

03/28/12 Dodge is going to face a huge challenge if the manufacturer plans to remain competitive in the Sprint Cup Series beyond 2012. The key word there is competitive. Dodge can more than likely find a way to stay in NASCAR's top division next season in the aftermath of Penske Racing's switch to the Ford camp. But the list of organizations available that can match what Penske has brought to Dodge the last two seasons is a short one, leaving 2nd and 3rd tier teams to choose from.

Nearly every top flight Sprint Cup team is locked into a long-term agreement with another manufacturer. Chevrolet has Hendrick, Stewart-Haas, RCR and Earnhardt-Ganassi Racing tied up, Toyota is tightly aligned with Joe Gibbs Racing and the resurgent Michael Waltrip Racing and Ford has its bond with Roush Fenway Racing, that shares an alliance with Richard Petty Motorsports. Unless Dodge is willing to write a check with a significant number of zeroes, it's unlikely the manufacturer is going to pry any of those teams away from their current agreements.

The Ganassi stable may be a possibility as management looks to find some solution to fixing the issues that have plagued the team for nearly two years. But with the team's Earnhardt Childress Engine program as a major component of the business, even that scenario seems unlikely.

Roger Penske said over the weekend he's still considering keeping his engine department functioning with the possibility of developing Dodge power plants on the table, despite his NASCAR effort campaigning Fords in 2013 and beyond. That would make for some strange bedfellows to say the least, but would at least provide Dodge with an engine production option for next year it currently does not have in place.

The new Charger unveiled earlier this month at Las Vegas is a good looking car that further ties NASCAR's manufacturers with the brand identity fans have been asking for since the inception of the "Car of Tomorrow." It would be a shame if Dodge wasn't able to stay in the sport and campaign the brand new Charger. But at this point, the team options available are limited if not non-existent and there is a very real chance NASCAR will only have three participating manufacturers (Ford, Chevy and Toyota) in 2013. CBS Sports

And the most important question of those three is the engine question.

The Dodge unveiling itself here was rather untimely, considering Roger Penske's recent announcement of moving to Ford in 2013. Penske men have been handling the development of the 2013 Dodge.

There are a number of issues here:

First, with Penske, after 10 years, leaving Dodge at the end of this season and moving to Ford, Dodge would have only Joey Arrington as a veteran Dodge engine builder.

The engine situation with Dodge points up a major issue in this sport, one that NASCAR CEO Brian France has recognized but has so far been unable to reconcile – that building NASCAR engines has become such a highly technical, and highly expensive and specialized job that only a handful of NASCAR engine shops even exist anymore.

In years past, as many as 25 engine builders around the country could build NASCAR-worthy engines.

Today the only men with top NASCAR engine building operations are Rick Hendrick, Richard Childress, Jack Roush, Joe Gibbs/Toyota and Penske. (Even Gibbs has been forced to merge his once independent engine operation with Toyota's Los Angeles-based TRD.)

Every other team on the tour is thus now dependent on making an engine deal with one of those Big Five NASCAR engine operations.

And there is speculation that Penske could be shutting down his own engine program at the end of the season and getting his engines from Roush-Yates.

The Dodge dilemma, which broke just a week ago when Penske made his surprise announcement, has thrown the Sprint Cup garage into a tizzy.

Yes, Dodge might be able to make a deal with the Richard Petty/Andrew Murstein/Douglas Bergeron team for 2013….but there is no engine operation there; Petty's two teams get engines from Ford's Jack Roush and Doug Yates.

Arrington could help fill the void, but Arrington's operation isn't nearly the size of the Hendrick, Childress or Roush engine operations.

Soooo…..little wonder that speculation has become intense over Dodge's future in this sport.

Will Dodge hang in there in NASCAR? Or might it simply abandon this brand of motorsports?

Dodge was on the NASCAR sidelines for more than 20 years until returning in 2001.

Dodge boss Ralph Gilles insists he's not worried about 2013, and he dismisses any talk that Dodge might fold its tent and go home.

Still….Gilles did not attend the Daytona 500…while, for example, Toyota boss Akio Toyoda flew to Daytona from Tokyo and even took laps himself in Toyota's new 2013.

And it's unclear if Fiat-Chrysler boss Sergio Marchionne has ever been to a NASCAR race. But he does have a NASCAR 'hard card.'

In the Dodge speculation is the possibility that the parent company might simply sell its NASCAR equipment to another car maker, like Nissan.

Certainly if a Nissan, or Honda, were interested in getting into NASCAR, this might be a good opening. Mike Mulhern

03/12/12 Dodge Motorsports president Ralph Gilles said Dodge is moving forward and hopes to remain in NASCAR despite losing Penske Racing as its signature team. Gilles spoke Sunday morning at Las Vegas Motor Speedway after the unveiling of the 2013 Dodge Charger Sprint Cup car. Two weeks ago, Roger Penske announced his two-car Dodge team (Dodge's only major team) was switching to Ford in 2013. Gilles said he already has heard from several NASCAR teams who are interested in switching to Dodge next year.

"With the way our phone is ringing, I'm not too concerned," Gilles said. "It's been a pretty positive thing. With every storm there's a sunny day later."

But Gilles would not say for certain Dodge would remain in NASCAR in 2013. "Based on the momentum we've developed, we don't feel it's going that way," Gilles said about the possibility of leaving.

"We would love to stay if we can, but we have to figure it out. We're actually investing in NASCAR more than ever. Some of this timing (of Penske's announcement) was unfortunate. Some things Roger didn't realize we were doing are coming to pass." ESPN

03/03/12 Dodge is left in a pretty difficult position without a single top-flight organization representing them in the sport (sorry Robby Gordon fans). The teams that defected in recent years left because of, among other things, cost and performance issues and not all did so on good terms.

It seems unlikely any of the usual suspects would be inclined to leave their current manufacturer for Dodge. This presents Dodge with a challenge in either lifting an existing organization like say Front Row or Turner, or offering a larger organization enough of a financial incentive that saying no would be very difficult and if they are going to start building its own NASCAR engines they may as well do an IndyCar engine instead. It will cost them less and they actually would have a chance to win championships. Recall that parent company Fiat has had a number of talks with IndyCar about entering the series with one of their brands.

03/02/12 Dodge will unveil its 2013 Sprint Cup car on March 11 at Las Vegas Motor Speedway. However, the bigger question now is who will be driving Dodges next year? Robby Gordon Motorsports would be the lone team at this point after Penske Racing announced Thursday that it was moving to manufacturer Ford in 2013. But Dodge has also reached out to other teams, including Richard Petty Motorsports, according to owner Andy Murstein. "We received calls from several manufacturers today asking if they could meet with us," Murstein said. "It seems that while sponsorship is down, car manufacturer support is strong. That is probably due to the fact that the car companies are all doing significantly better these days than a few years ago. Thus Petty has been approached by several manufacturers recently.

What's interesting is that while there are the usual suspects there is one new manufacturer that is trying to break into the sport. RPM's contract with Ford is up at the end of the season. Petty ran Dodges from 1972 to 1978. Petty Enterprises aligned with Dodge again when the manufacturer returned to NASCAR competition in 2001 through most of the 2009 season, then under the RPM banner. Earnhardt Ganassi Racing president Steve Lauletta said the company had not yet been approached by Dodge. Fox Sports

Richard Petty Motorsports said: "We welcome Penske Racing to the Ford Racing Family in 2013. Additional teams mean more information for everyone and that's a very good thing from a competition standpoint. We have a partnership with Roush Fenway Racing and we are happy to be a part of the Ford Racing program. As we always do, we will evaluate all of our options and make decisions based on what is ultimately best for our race team." RPM

So will Dodge decide to sign a backmarker team in NASCAR and lose week in and week out making their brand look inferior, or will they switch to IndyCar, which is on the rise and where they can win races and promote the Dodge or Fiat brand worldwide?

03/01/12 Now that Penske Racing has announced it will field Fords in NASCAR beginning next season, what does that mean for Dodge?

According to Ralph Gilles, president and CEO of Dodge’s Street Racing and Technology Brand and Motorsports, it’s time for the automaker to evaluate “the opportunities available moving forward."

“Our motorsports involvement isn't limited to NASCAR. We do value our NASCAR program and will be evaluating the opportunities available moving forward. As those opportunities materialize, we'll reveal our 2013 plans, not only in NASCAR but in other forms of motorsports."

Randy Bernard should try and entice Dodge to come over to IndyCar where they might actually win races and a championship. Now that Dodge has lost Penske they don't have a chance to win in NASCAR, not a chance, unless they get "the call." Look for Dodge to win a lot of poles henceforth as NASCAR looks to make Dodge feel good so they do not leave the series.