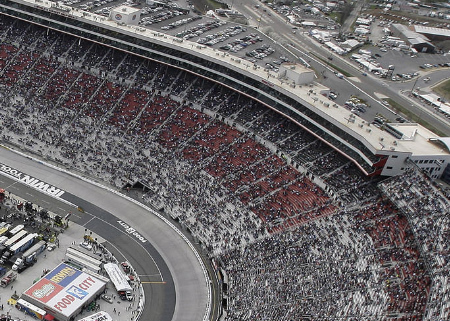 UPDATE #2 The fans spoke loudly on Sunday at Bristol Motor Speedway. Most from their dens and living rooms.

The number of empty seats in the 160,000-seat facility, which a few years ago was the toughest ticket in NASCAR, raised huge red flags. Official attendance figures said 120,000, but the stands appeared not much more than half full. In 2009 the track celebrated 55 consecutive sellouts dating to August 1982. So what were the fans saying?

The Bristol Facebook site suggests many are turned off by the two- and three-wide racing we've seen since the track was repaved and reconfigured from a one-groove track in 2007. They miss the fender-bending action that made tempers flare because the only way to pass was to bump somebody out of the way.

That Carl Edwards settled for second because he saw no advantage in moving winner Kyle Busch out of the way in the final laps likely wouldn't have happened on the old surface. Edwards would have knocked Busch out of the single lane and gone on to victory.

Said D.J. Wiseheart on Facebook, "Worst Bristol race ever. … Bristol is the worst track they go to now. SUPER BORING. No one cares about the side-by-side racing at Bristol. … Change Bristol back to the way it was!

03/21/11 The race at Bristol Motor Speedway Sunday wasn’t a sellout. Not even close. In fact there appeared to be entire sections with seats that had no butts firmly planted in them.

It was once one of the most coveted tickets in all of NASCAR and a must have for just about any sports fan; a venue with 180,000 seats that filled up with no problem. But Sunday that was far from the case. After an early season with higher TV ratings and better ticket sales than last year at the first three races, NASCAR appeared on a roll.

It certainly isn’t the track, nor can NASCAR itself shoulder any blame. Of course maybe there shouldn’t be any ‘blame’ at all. It may have a lot more to do with the demographics and despite a rosy picture in the rest of the country, the economy that is still affecting more people than some would want to believe.

Those fans that live within close driving distance of Bristol, primarily residents of Tennessee and North Carolina, are still hurting. The most recent stats released by the US Department of Labor show that while the rate of unemployment across the country is at 9.5 % in Tennessee the rate recently rose to 10.2% and in North Carolina it stands at 10.5%.

For fans elsewhere, those who would normally drive to Bristol from outside the area, gas prices have to be a factor. With gas now hovering around $3.50 a gallon and rising, the cost of a road trip anywhere has to make just about anyone think twice.

While the preliminary TV ratings won’t be out until early in the week, given the racing on the track so far this season including Sunday’s, one has to suspect that they will rise from last year if not continue the upward trend of the first three races.

Still there will be many critics and even fans who will try to blame NASCAR or the track in some way. The truth however may be that the real world may be at fault and may continue to be for some time to come. Examiner.com

[Editor's Note: Unemployment is up a few percentage points in that region. The attendance drop is much more than that. Seats are empty because you can only rip off fans so long with high Bristol hotel and ticket prices before they say enough is enough.]