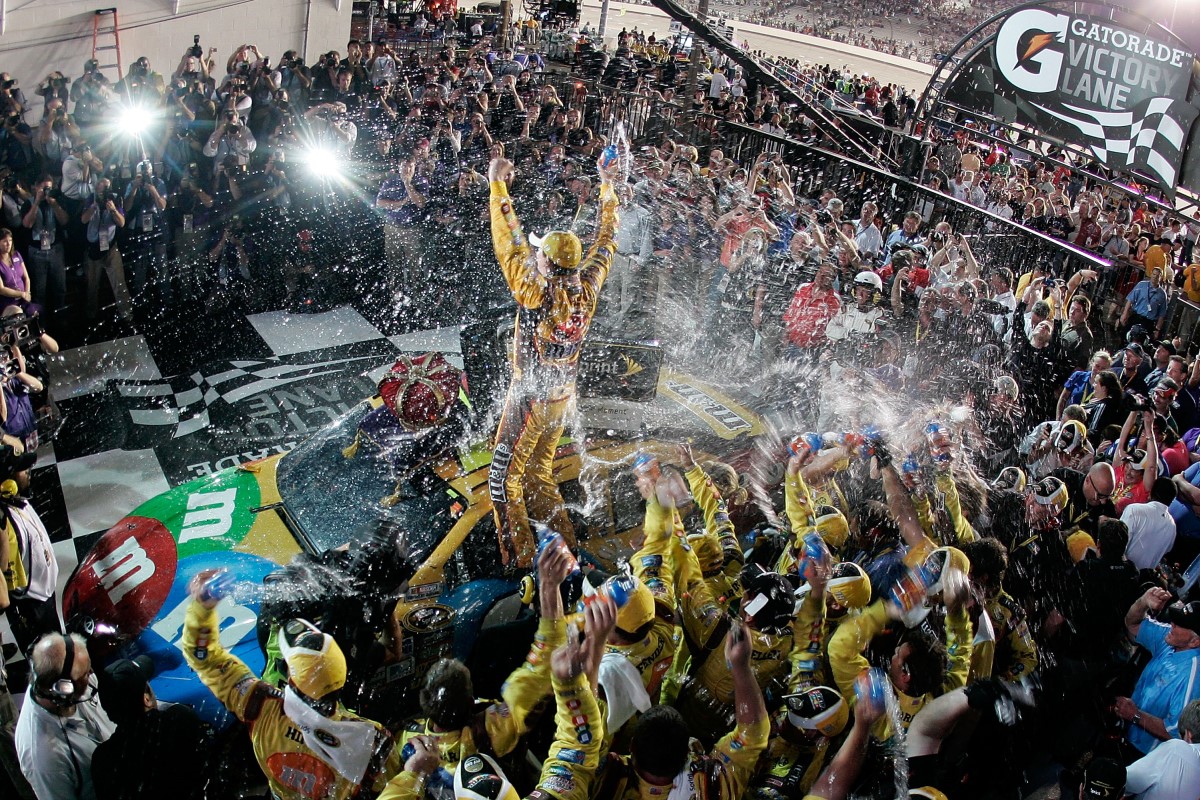 Busch surged past Gordon after a restart with five laps left in the Crown Royal Heath Calhoun 400 and cleared Gordon's Chevrolet to the outside through Turns 3 and 4. Four laps later, Busch beat Gordon to the finish line by .755 seconds.

The victory was Busch's 17th in the series. Kevin Harvick ran third behind Gordon, followed by Jeff Burton and Carl Edwards. Juan Pablo Montoya, Martin Truex Jr., Ryan Newman, Marcos Ambrose and Johnson completed the top 10. Harvick took over the lead in the series standings from Johnson, who trails by 10 points through 10 events.

"I figured I was going to get the outside (for the last restart)," said Busch, who won the spring race at Richmond for the second straight year. "All I wanted to do was just get into Turn 1 smooth and get a good launch up off Turn 2 down the backstretch—and then make sure I got into (Turn) 3 without over-driving it. …

"I knew if I could just get through Turn 3 OK and hammer down off Turn 4 and get him cleared that it would be pretty good—and it worked. That's what I did. Did I have a plan? Was that exactly my plan? No. I was just going to drive it as hard as I could, and make whatever happened happen. It worked, just off the cuff."

Gordon finished second for the eighth time since his last win in the series on April 5, 2009 at Texas, 39 races ago.

"I've been doing this long enough to know they don't give out trophies for leading any lap other than the last one," said Gordon, who reached the boiling point at Talladega last week after Johnson, his Hendrick Motorsports teammate, forced him onto the apron in Turn 3. Moments later, Gordon was wrecked.

"We're a team that's made huge strides, in my opinion, from last year. … That's what I'm excited about. We're leading laps at a lot of different types of tracks, and I think our team is really on top of our game.

"Yeah, it's a little disappointing that we haven't won some races yet, but if we keep doing this, those will come. We've got to keep putting ourselves in position."

Gordon led by 2.566 seconds when Elliott Sadler slid through the frontstretch grass with four flat tires to bring out the fourth caution of the race on Lap 367. When pit road opened on Lap 373, Gordon, Burton, Harvick, Montoya and Ryan Newman stayed out on tires that were three laps old when the caution flew.

Busch, Denny Hamlin, Truex Jr. and Edwards led a group to pit road for fresh rubber in preparation for a restart on Lap 378. Gordon was leading when the sixth caution flew on Lap 389 for Sam Hornish Jr.'s wreck on the backstretch. That set up the five-lap dash to the finish.

Busch ran away with the first half of the race, leading all but eight of the first 229 laps before Burton powered past him in Turn 3 on Lap 230. Burton held the top spot for 20 laps, only to surrender it to Gordon, whose car came to life in the middle of a long green-flag run.

"I have no idea how this has just happened—but I'm liking it," Gordon radioed to crew chief Steve Letarte after the pass for the lead. Gordon extended his advantage through a cycle of green-flag pit stops, and by Lap 300 he had stretched his advantage over Harvick to 2.878 seconds.

Notes: Edwards led Laps 269 and 270 during a cycle of green-flag pit stops. Those were the only laps he has led this year, ending a 12-race drought dating to Talladega in November 2009. … Busch gave Dave Rogers his first victory as a Sprint Cup crew chief.