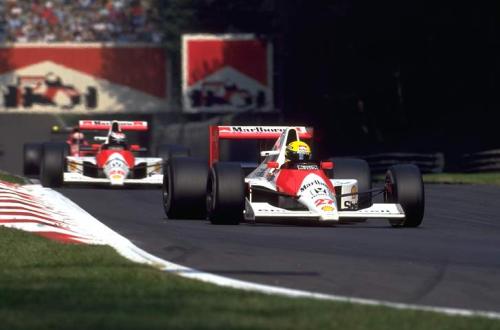 Just as the genie won't go back into the bottle, and the egg can't be unscrambled, Formula 1 will forevermore race under the coronavirus cloud.

But hey, racing without spectators, with scaled-back race teams quarantined in hotels and subjected to constant virus testing, and the full panoply of related 'biosphere' measures all designed to "keep us safe" … it's better than no racing at all, isn't it?

I suppose that's one way to look at it.

Currently, racing junkies all around the world are only getting their 'fix' by logging onto something called Twitch – if you're not sure what that is, ask your 12-year-old. Personally, I'm not into it at all – and that's coming from someone who has a full simulator in his living room and loves using it whenever that same 12-year-old is not.

But although Lando Norris vs Simon Pagenaud is undoubtedly a coronavirus-era controversy, it's hardly Senna vs Prost, Schumacher vs Villeneuve or Hamilton vs Rosberg, is it?

[adinserter name="GOOGLE AD"]Just be careful who is in earshot when you denigrate live online racing, though. Mention it on one of those Twitch streams, and you'll be likened to a Minecraft Creeper who lives in Fortnite's Villain Lair. Or something.

For many of those who learned to use a phone not by entering an Apple ID but by dialing in a clockwise direction, we just don't get it. And whatever. If I'm being asked to compare Senna driving Prost off the road at full throttle at Suzuka with a bored Indy 500 winner killing time by playing a computer game, then I'm not hurt at all by the insults of a pimply Generation Z'er.

In truth, I'm not really putting esports down at all, even though I cringe in embarrassment every time a car 'crashes' (note to software developers: the crashes look ridiculous). But before last Christmas, mere days before the entire world started watching images of Chinese authorities welding citizens into apartment blocks in Wuhan, I predicted: "Within just a few years, a gamer will win a grand prix." Esports was definitely a thing, and I was fascinated to discover how it would pan out over the next few years.

Since then, a grand prix winner has most certainly won a game – so I just got it all back-to-front. As I said, I'm definitely not dismissing esports; I'll just be horrified if this is what we get instead of real racing, long term. Why? Because every time I try to watch it, I say to myself: "Oooh, good idea – I'll jump on my simulator!" Conclusion: only a fanboy with nothing better to do will watch Norris or Charles Leclerc's giggly Twitch stream. Real F1 fans – or at least the ones with a grey hair or two in their lockdown beard – will be watching a replay of Donington Park 1993. Or playing on their own sim. Or having a nap.

That's why I cannot get my head around the arguments of those who think we should just forget all about real racing in 2020 and just try again next year.

Sure, races without spectators are a false economy, because they basically cost money to put on and risk damaging the sport's image. The race promoter, for example, makes most of its loot from ticket sales. And the corporate world, and even the media, will be locked out, with fans around the world only able to turn on the TV and be spoon fed whatever positive PR spin on the dire situation they desire. And if the old adage that a driver is only as good as his last race holds true, then a grand prix is only as good as the last grand prix. And no one would have ever imagined locking the spectators out of a spectacle, would they?

But at least it's something, right? Right. Formula 1 shows it is alive, sponsors get placated by what will be a rare taste of that old-fashioned phenomenon called 'live sport', TV broadcasters can put something on that isn't a replay or one of those depressing Zoom videoconference interviews, Lando Norris gets a short break from Twitch, the teams get something to do other than manufacturer ventilators.

On the other hand, a season opener in July, followed by a mirror 'ghost race' at the very same circuit in Austria a week later, and then a following schedule that more closely resembles a black hole than an official FIA calendar, isn't necessarily what Formula 1 is all about. There are no easy answers here.

In truth, this has been coming for years – probably a decade, in my view. Ok, a microscopic pathogen may have been the spark, but a radically shifting culture, economy and society has been pouring fuel all over Formula 1 for a long, long time. Grid girls are banned, remember. The cars pur rather than scream, remember. The drivers are skinny, emotionless, teenage sons of billionaires rather than Nigel Mansell, remember. The goals are carbon neutrality and biofuels rather than sticky qualifying tyres and James Hunt's breakfast of choice, remember. The world has changed, and it was already leaving Formula 1 behind. So while you might regard coronavirus as a big nail in the F1 coffin, it certainly wasn't the first, second, third, fourth or fifth.

So for what it's worth, even though I probably won't dine in a restaurant with a giant sheet of Perspex glass between my wife and I, I really do hope Formula 1 gets its European 'ghost races' up and running from July. Why? Because the engines have been in mothballs since February. We're well into May now. Leave it another few months and there may not be anything to crank up at all except stories of bankruptcy.

It's anyone's guess what the 'new normal' will be, for Formula 1 and the world, but you can already get a preview as you queue six feet apart in your local supermarket. Max Verstappen's dad Jos summed it up best this week when he mused disheartenedly: "I can hardly imagine that, without a vaccine, we can be all together again with 100,000 people. It is an absurd situation."

It is indeed. If they're talking about 25% maximum capacity in restaurants once they re-open, there are two big problems with that plan: The restaurateur will be just as broke as he is right now. And the prospect of takeaway or Deliveroo may still be a lot tastier. Apply that logic to the mass crowds required to make Formula 1 or any major event we used to love and rely on a going concern, and Houston, we have a problem.

I suppose we just need to see what happens. On Twitch. Yawn.